Answer: How are the kelp forests doing?

The kelp forests are magnificent.

But how are they faring in the face of climate change?

As I mentioned in the Challenge, I mean JUST kelp--that is, members of the Laminariales family, and specifically, the kelp that grows along the California coast.

Sidebar mini-lesson:  Across the family of kelps there is huge variation in size, morphology, life span, and habitat. Some are annuals while others are long-lived perennials. They  inhabit areas ranging from the tropics to the High Arctic, and from the intertidal down to depths of 70 m. Kelp commonly grows in aggregations called beds or forests, which usually forms a dense subsurface canopy. Some kelps have gas-filled structures that allow them to produce a floating canopy that extends to the surface in water depths as great as 30 m.

For this Challenge we're interested only in kelp that grows along  the California coast.  And there are really two dominant kinds: bull kelp (Nereocystis luetkeana) and giant kelp (Macrocystis pyrifera).  Here they are side-by-side for comparison.  They look very different, but both colonize Californian waters. 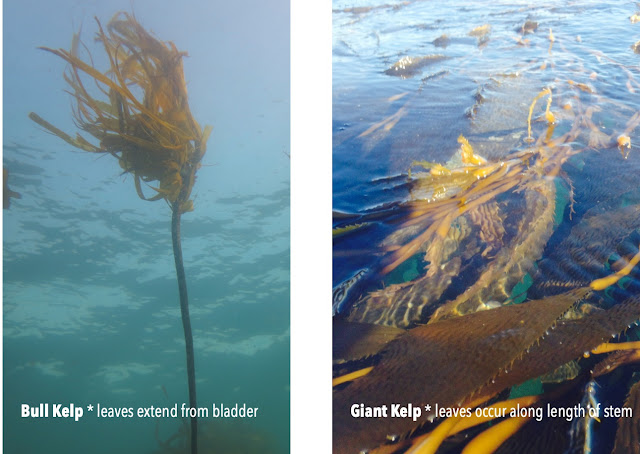 I've noticed over the years that kelp forests seem to come and go. There certainly have been changes, sometimes dramatic, sometimes minimal.  But is this fluctuation normal?   How much of those changes would be considered "normal"?

1. How are the California kelp forests going these days?  Are they healthy?

Since I'm not sure what I'm going to find, I'll open the first 5 results (which all look to be from good sources) in parallel--that is, in different tabs.  Here's what that looks like (click to see it full-size): 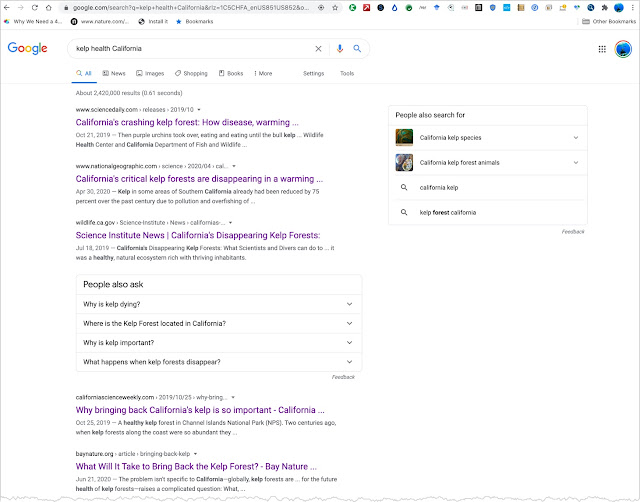 Just scanning the snippets makes me think that the kelp is in a pretty dire state.

I then opened and read each of the top 5 tabs, opening only the results that I thought were pretty high quality links.  (This is lateral browsing--a great technique for doing a quick broad search.)

Here's what I found:

1. Science Daily (Oct, 2019) Kelp forest are crashing due to purple sea urchins, which grew wildly in number after a disease devastated the sea stars (which control urchin numbers).

2. National Geographic (April, 2020) This is behind a paywall, but I happen to have a NatGeo account, so I just logged in and read it.  Same story: Purple urchins wiping out the forests.  Interesting note embedded in this article--the historic max acreage of kelp in California was around 2500 acres.  Also, a small section of kelp is being restored to health by sending out divers with hammers to kill off the purple urchins. (Great idea, but labor intensive.)  { side comment: That 2500 acres number seems small to me.  See the map at the bottom of this post.}

3. California Dept. of Fish and Wildlife (July, 2019)  Another confirmation of kelp forests being destroyed by purple urchins. In the past 5 years, California's kelp forests have declined by 95%. Repeat of the death of the sea stars (beginning in 2013) leading to urchin explosion, leading to kelp devastation. Plus, a patch of warm water formed on the coast (2014) which stresses the kelp, slowing growth and reproduction.

4. California Science Weekly (Oct, 2019) Repeat of the story, with the additional twist that the warming trend is what led to the loss of sea stars.  This article also pointed to a fascinating article with long-term data about California kelp in the esteemed science journal Nature.  (When I read this, I thought "Aha!  This will be useful for Challenge #2!" It was.  See part 2, below.)

5. Bay Nature (June, 2020)  Repeat the same story as before, but with extra data--they claim that 90% of the kelp along a 200 mile stretch of Northern California has disappeared.  (The story centers on Fort Bragg, in the top quarter of the state.)

That's five different sources (and they don't draw on the same studies, so far as I can tell), all recent, all respected, all telling the same sad story.  The kelp forest is fairly down from historic levels.

Just to be sure, I went down another 10 results.. but it was all the same news.

2. Can you find some data about the state of the kelp forests?  How can one measure the forest and create a data set to analyze kelp forest health over a span of decades?  Can you find such a multiyear data set?

So... What I'd like to see is data about kelp over the long term.  This is called a longitudinal data set.  My strategy is to start with a query asking about this topic broadly, then search for a specific longitudinal data.  That is, we started with:

This search led incidentally to an article in Nature by the folks at the Coastal Marine Science Institute (UC Davis, in Bodega Bay, CA) about the health of kelp.  (As you know, Nature, the science magazine, is a very reputable resource, so this is a pretty good citation.  Rogers-Bennett, L., and C. A. Catton. "Marine heat wave and multiple stressors tip bull kelp forest to sea urchin barrens." Nature Scientific Reports, 9.1 (2019): 1-9.

That article, pretty much sums up the state of affairs over a twenty-year period:

"Twenty years of kelp ecosystem surveys reveal the timing and magnitude of events, including mass mortalities of sea stars (2013-), intense ocean warming (2014–2017), and sea urchin barrens (2015-). Multiple stressors led to the unprecedented and long-lasting decline of the kelp forest. Kelp deforestation triggered mass (80%) abalone mortality (2017) resulting in the closure in 2018 of the recreational abalone fishery worth an estimated $44 M and the collapse of the north coast commercial red sea urchin fishery (2015-) worth $3 M...."

The outlook is pretty grim.  Figure 3 in the paper sums it up in a single sad chart:

In reading through this paper, I notice that it's only for Northern California.   So I repeat the query, but adding in "southern" like this:

which eventually led me (after skimming through about 10 papers that looked good, but didn't have the data) to the California Department of Fish and Wildlife's article on "Aerial Kelp Surveys" which includes another long-term chart showing areas of kelp coverage over the past 27 years:

And a map to orient you so you'll know where those regions are: 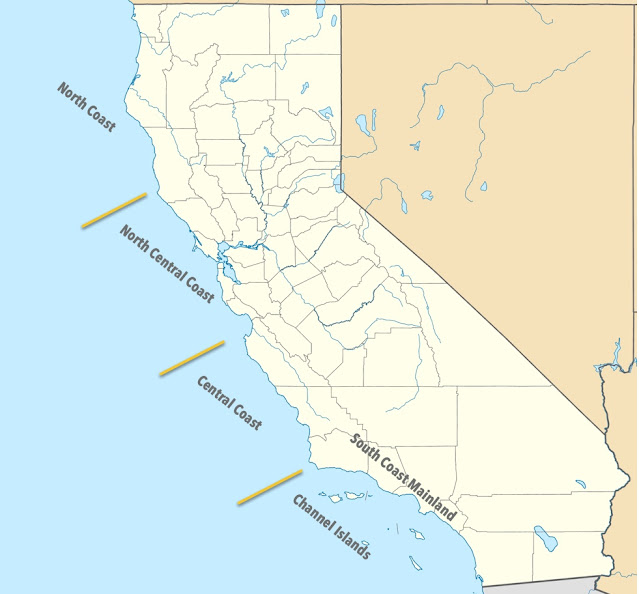 This chart shows a worrying trend.  If 1989 / 1999 are the baseline definition of "normal" kelp cover, then the Channel Islands (in Southern California) and the Central Coast have been doing relatively well, while the North Coast and North Central areas are suffering badly, especially since 2009.

This is all consistent with the other articles I read along the way.  A combination of relatively warm sea water, the loss of sea stars, and the growth in numbers of sea urchins have led to a loss of kelp throughout the state.

But perhaps there's a glimmer of hope; if whatever is happening in the Central Coast and Channel islands can be replicated elsewhere...

Interestingly, this paper ("Aerial Surveys..") also had a link to California state's kelp survey data!  (All papers should have dataset access like this!) If you have the time and interest, it's all there.

Even better, that data comes with a viewer that lets you load in the data of a given year and visualize it on the map of California coastal waters.  Here's what that looks like for the kelp survey data from 2002, a fairly "normal" year (check out 2002 in the above chart). 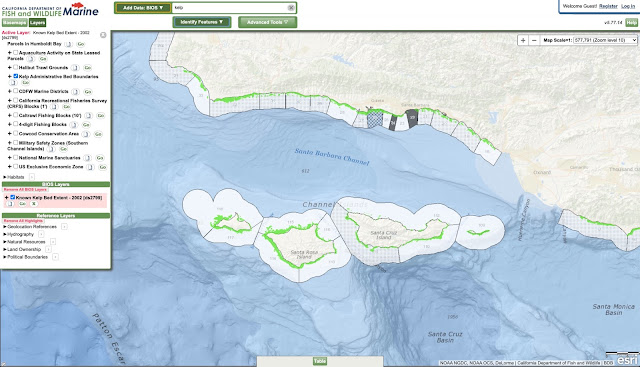 As you can see, the kelp forests are fairly extensive, surrounding almost all of the Channel islands.  If you did a cursory measurement, you'd realize that the kelp forest occupies much more than 2500 acres!

In any case, there's the data for the past 27 years, with detail data for 20 years of the north coast, all of which points to a disaster all along the coast, but with a small point of hope.  I'll leave it to you to do the research to see how/why this hope might arrive.  It's still a slim chance, but it's not utterly lost.

1. Define your terms.  In this case, kelp seems pretty straightforward, but it's good to be precise (it makes comparisons SO much easier).

2. Lateral browsing lets you see many sources side-by-side, making comparison much simpler.  My first query worked pretty well--so well that I was  able to open 5 tabs side-by-side and see what source had the information I wanted.  This also lets me look for multiply-sourced information.

3. Pay attention as you scan the articles.  As I was reading the articles looking for the overall health of the kelp, I just-happened to notice articles with longitudinal data.  Of course it helped that I was primed for it--I knew that was the next Challenge.  Deep point: Think at least one move ahead as you do your research--what kind of data will you need to answer your next question?  Then, as you do your SearchResearch, take notes... you never know which of those results (like the "Marine Heat.." article) will lead you to the data you really need.

4. Pay attention to what's missing.  To tell the truth, I didn't notice that the data for Southern California was missing in the first article.  I was so excited about finding 20 years of data that I kind of overlooked the gap.  It was only when I thought to check the kelp coverage in the Channel Islands (way down south) that I noticed the missing data.  It wasn't hard to modify the query to find the [kelp health Southern California], but it would have been embarrassing to have missed half of the state!

There's so much more we could do with this Challenge.  I had initially done a search using the Dataset Search tool, but that led to a whole other investigation!  If I have time this week, I'll write to you about that.

In the mean time, take care of your queries, and...