Answer: How are these connected? (Islands, vertebrae, flowers) 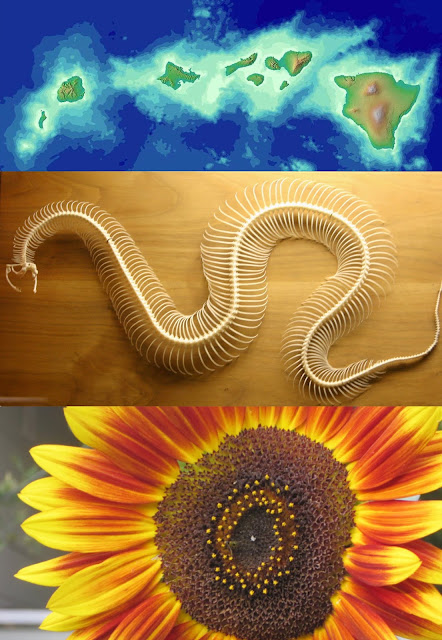 ... I really was looking at a sunflower when I had this insight--the deep connections between the sunflower, the skeleton of a snake, and the Hawaiian archipelago.

My initial thought process was roughly this:  "I wonder how the seeds in a sunflower form... what's the process that leads a single flower to grow from a single cell into a whole pile of seeds in the flower's disk?"

I realized that I didn't know.  Naively, I just sort of assumed that they all grew in parallel, all at the same moment.

When I did my search for the actual mechanism and found out, that's when I realized the invisible story that links island formation to the development of snake vertebrae and links that to the growth of a sunflower.

What's connects the archipelago of Hawai'i with the vertebrae of a snake?  What then connects that to the flowers in a sunflower?  Can you think of what these three very different things might share in common?  (And no, it's not "they're made of atoms..." or something similar. It's actually an interesting commonality.)

If you're impatient, the common element between them is this:

All three (Hawaiian island, snake vertebrae, sunflower seeds) are all created by a single point source that generates one thing (island, bone, seed) and then moves a bit to make another.. and another... and another... repeating the generation + move cycle.  It's a spatial-temporal process that creates such structures in the world.

Now, how could you find this commonality?

In the original post I gave a big hint.  To wit, "think about the processes involved in how they came to be."  That is, what's the origin story for each of these things?

So I'd start with the simple case: How did Hawaii come to be?

You'll quickly discover that a “hot spot” in the Pacific plate is responsible for creating the islands.  How?  The Pacific plate moves over a stationary hot spot (a thin spot in the Earth's mantle where magma can emerge to the surface).  As the plate moves, it keeps creates the islands; that's why there's a long chain of Hawaiian islands, with the oldest (and most eroded) islands in the northwest.  See the long line in this map?

You might notice Loihi--that's not an island you know about.  It's the newest island and is still being formed underwater.  It will probably emerge above the water in 10-100K years.

It's worth noting that there are other hotspots--the most obvious one is the Samoa hotspot that created those islands.

Now we can do the same query, except with snake vertebrae:

[ how did snake backbones come to be ]

This leads to several articles including this one about How snakes evolved.  From that article, I learned that HOX genes regulate backbone creation.  This query also got me to an article about how snake vertebrae are created embryologically (that is, when the snake is still in the egg).  In How the Snake Got Its Vertebrae, I learned that HOX genes switch on/off the creation of each vertebrae.  (Really? That sounds a bit like the volcanic island creation.)

During development, vertebrate embryos grow from head to tail. As the body elongates, vertebral precursors known as somites, or segments, emerge from a group of immature cells called the presomitic mesoderm (PSM). These segments develop at regular intervals, much as a plant's stem forms branches at regular intervals as it grows.

“The way the body of a human or mouse or any vertebrate forms is from a growth zone - like the tip of a shoot - which is called the tail bud. First you produce the head, then the neck, then the thorax, and so on, until the tail,” said Pourquié. The long chain of vertebrae that defines a snake's body takes shape in about 23 days.

The regular emergence of segments from the PSM is driven by a cell signaling system known as a “clock and wavefront.” The clock is a simple set of signaling molecules that accumulate and disappear in rhythmic oscillations. Each time the clock molecules peak, a new vertebral segment is created.

Left to their own devices, the oscillating proteins would stay in one place, and create vertebrae one on top of another. But in developing embryos, the clock is whisked along the extending tail by another set of signaling molecules called the wavefront.

In other words, vertebrae are made one after another by the PSM, which spits out a new proto-bone, grows a bit, and then creates another, making back bones that line up like pearls on a string. That's how volcanic island chains are formed, except with lava instead of bone.

You can read about it in the original paper:  From Lizard to Snake; Behind the Evolution of an Extreme Body Plan, which comes from the journal Current Genomics.

“The somitogenesis clock comprises genes from the Notch, Wnt and FGF pathways, which are expressed in a rhythmic fashion in the PSM. Because cells are out of phase depending on their time of creation in the tail bud, the expression of the clock genes appears to occur as a wave, sweeping through the PSM, inducing the formation of a somite each time a ‘wave’ passes the determination front. The rhythm of this oscillator thus determines the periodicity with which somites are produced.”

That is, the somites (the early-stage vertebrae) are created by the "hot spot" of the embryo, and then expand out into full-fledged bone as the snake matures.

Okay, what about sunflowers?  I tried the same query pattern for this:

[ how do flowers on a sunflower come to be ]

…and ... I had lots of failures… couldn't find anything too useful.

But I DID learn something interesting about how the arrangement of seeds in a sunflower is a result of how they were formed.  So I changed my strategy a bit.  Following up on that clue, I searched for:

[ pattern of seeds in sunflower ]

which took me to and article about the Fibonacci series in the sunflower.  "Oh no!" I thought.

I'd read such things before.  They're cute and mathematically fun, but what do they have to do with my question?

But this time I noticed that each seed of a sunflower comes from one flower. Not a surprise. But each FLOWER is made at a single point of origin.  I found that a flower germ is created, then the primal flower head turns 137.5 degrees and creates another one. Repeat.

THIS sounds a lot like volcanos, or the backbone development… or flowers.

This page also tells me about phyllotaxis--that is, how plants move.  (Which we've talked about before in SRS: What do you call a rotating flower?)

This led me to the key insight:  The disk of a sunflower is made by a moving flower head that emits flowers every so often.

This same query also gets me to another sunflower page: Nature, the Golden Ratio and Fibonacci too  which tells me that the spiral arrangement of flowers happens because each new baby flower is formed, then the flower bud makes a 137.5 degree turn, and makes another flower.  The flower disk grows slowly outward as new flowers are created (and then rotated) from the center.  (Check out the animation on this page.  It's really good at explaining the idea.)  That magic number: 137.5 degrees, happens to be the Golden Angle (yes, related to the Golden Ratio), which is what gives rise to the Fibonacci numbers in numbers of sunflower seeds in a spiral of the flower.

One can go into infinite regress on this topic.  (For the math-curious, check out Fibonacci Numbers and Nature.) In this article, they point out how this “point source + moving part creates distribution of objects in space over time.”

In each of our examples, islands, backbones, sunflower seeds--they're all created by a point-source that's attached to a moving part.

This same generative process also brings about the shape of a nautilus and many other naturally occuring spirals.

For SRS purposes (and to find even better sources), I then searched for this technical term (phyllotaxis) with my target (flower development):

This leads to wealth of fascinating papers, all fairly technical, e.g., Computational models of Auxin-driven patterning in shoots,  or the completely absorbing:  Phylloatactic patterning of gerbera flower heads, which taught me about primorida--the cells that originate body parts, like flowers or vertebrae.  If a primordia is on a rotating (phyllotactic) stem, then spirals emerge.  The rate of spin and the rate of growth determine what kind of spiral will be made.

And this finding answered an earlier question:  What's that "hot spot" thing called in biology?  Answer: It's a primordia.  That's what makes the proto-flower, and the proto-vertebrae.  Same idea.

And, while doing all this search, I found a RadioLab episode that tells this story (about HOX genes and vertebrae development) in a story about genes and body shapes.  (Check it out: RadioLab Dispatch 6: Strange Times -- the discussion is right about 30:05 into the program.)

As I said last week:  Why is this an interesting SearchResearch Challenge?  Because people are ALWAYS noticing connections between things.  Sometimes they're deep and interesting, sometimes they're spurious--we have to know how to tell the difference.  This is a Challenge about how to seek out and validate a suspected connection.
1. Use a pattern to find similar answers to a common question.
In this case, we looked for similar features between each of the three very different things (islands, bones, flowers) by starting off with searches for their origins.  I just used a search like:
[ how did X come to be ]
I figured that people would have written out the origin stories for each of these things.  And, sure enough, they do.
2. Keep searching... the pattern will emerge.
That search took a few extra steps in the case of the sunflower seeds, but at each step I was able to learn enough to do the next search, which ended up leading me to the answer.  It's all about time and space... and the willingness to keep searching for a deep connection, even when it's not obvious.
Hope you enjoyed this as much as I did.