Answer: Why is there an elephant statue in this Wisconsin park?

An elephant in Delavan? 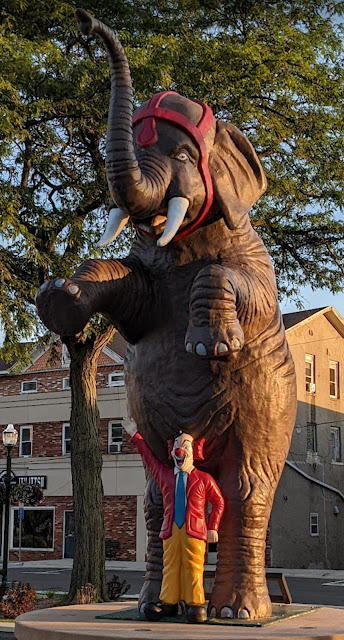 Seeing THIS in a mid-sized Wisconsin town was a huge surprise, and prompted me to look for the reason.

(As I've said before, the most common motivator for SRS Challenges is something that doesn't quite fit in... something I didn't expect.  And I surely didn't expect a life-sized elephant and brightly painted clown in a small town parklet.)

In any case, this scene made me look twice and take the pic, and it leads to the following SearchResearch Challenge:

1. What's the story here?  Why is there an elephant in the middle of small-town Wisconsin?  Really?   I did a little digging and my mind is boggled.  Can any of this be true?

I started with the obvious search:

which gave me decent results.  But I ALSO tried a longer, more question-based query:

[ why is there an elephant statue in delavan wisconsin ]

and THAT gave me rather different results.  Here's a side-by-side comparison of the two SERPs. 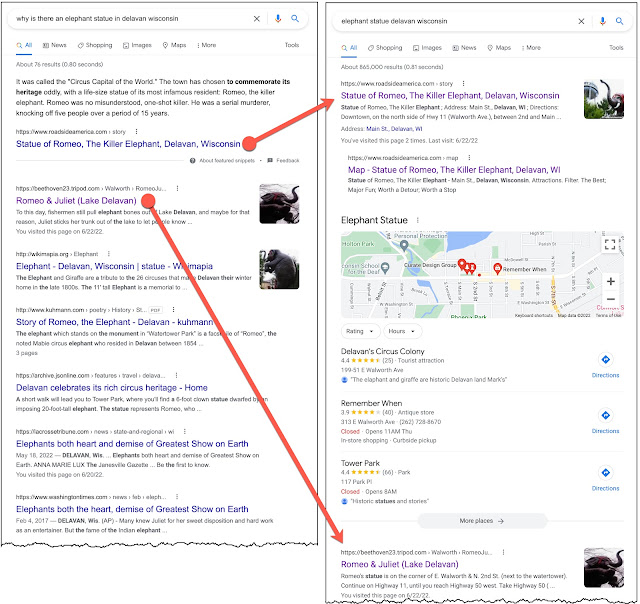 In these two versions of the query, Google is trying to give you the best answers with-respect-to your underlying intent.  In the short query, Google is guessing that you're looking for information about the statues in Delavan--how to get there, nearby attractions, etc.  In the longer query (the more question-based one), Google thinks you're trying to find an answer to that question, "why is there an elephant in Delavan, Wisconsin?" and so it provides a more answer-base set of results, including an expanded snippet of information extracted from the first result (which is the same on both SERPs).

But as you can see, the second result ("Romeo & Juliet") is pushed farther down the page, and generally, the results are rather different.

What this means for you:  These days, Google is getting increasingly good at answering full questions, or at least trying to give you links to results that will let you answer those questions.

Note:  This doesn't let you off the hook... you still need to read and evaluate the results.

This Challenge is a great example of why this is so.

I opened up the top ten results in parallel in a single browser and looked at them in detail.  Fascinating.

In #1, Statue of Romeo, we read that Romeo was just a bad elephant that killed 5 people in 15 years. He was infamous, and so the town (which had a rich circus history) decided to put up a statue commemorating Romeo and a circus clown.

But in #2, Romeo and Juliet, we read that Juliet died one winter on the shores of Lake Delavan and was then pulled out onto the ice of the lake by Romeo, possibly explaining why he turned mean. This page goes on to say that "fishermen still pull elephant bones out of Lake Delavan..."

#3 is a link to Wikimapia, pointing out the location of the statue.

#4 is a story about Romeo and Juliet, claiming that "following the 1853 season, Romeo and a smaller female, Juliet, were sold to the Mabie Brothers and delivered to the show’s winter quarters at the present site of Lake Lawn Lodge..." on Lake Delavan.  (Which, coincidentally, was where I was staying while in Delavan.)  This story adds a tidbit--that Juliet died of a bowel obstruction, but repeats the claim that she was pulled onto the ice for deposition in the lake.  This article goes on to say that several elephant bones have been pulled from the lake since Juliet's death in February of 1864, during the height of the US Civil War.  There's a specific claim that "in 1931, a newspaper article documented the finding of a bone in Delavan Lake, which some thought to be from a prehistoric mastodon."

The rest of the results are either recaps of these, or not especially useful.

But what we've got here should be enough to figure out what the backstory is about Romeo and Juliet.

This is obviously a job for a news archive, and my favorite of the moment is Newspapers.com (it's fast, accurate, broad, and available in many public libraries).

A search on Newspapers.com for:

and quickly located several articles from 1864 such as this one from the Semi-Weekly of Milwaukee, WI. On March 16, 1864, they published this short blurb about Juliet:

There's no mention of her burial in the lake, nor of Romeo being forced into pulling her there.  All of the reports say the same thing: she died in February of 1864 at the site of the Lake Lawn resort (which was the Mabie circus company's overwintering site).  The ground would have been frozen in February, and I bet that a lake burial would have been the simplest solution.

Although I tried, I couldn't find anything from those days about Juliet being dropped into the lake, nor about Romeo being forced to push her body into the waters.

Nor was I able to find anything about the mysterious "mastodon bones" from 1931.

So I turned to Google Books, and found several books (including the generally reliable Arcadia Publications ) about Lake Lawn which repeats the same story (Juliet died in winter, was pushed into the lake), Romeo goes on to kill 5 men, bones later found in 1931 thought to be mastodon... etc.  But, unfortunately, none of these seem to point to contemporary accounts.  It seems that the story of Juliet's burial-at-lake grew up sometime after her death.  It's certainly possible that it happened, but there's no confirmation by news reports at the time.  (At least not that i could find!)

On the other hand, I did find a poster of the Mabie circus (there are multiple copies of this poster floating around).

The playbill describes "the gymnastic elephants, Romeo and Juliet..." as part of the menagerie. And, as you see, there are illustrations of them at the bottom of the page.
The Clown:  To be honest, I didn't think much about the clown (after all, seen one clown statue, and you've seen them all).  But the comments thread was fascinating.  I'm quoting Mike's comment here (with a little editing):

"I used to collect "First-Day Covers" ... specially decorated envelopes that contained a new stamp and was postmarked at the post office where it was issued.

A simple search [clown commemorative Delavan] brings up lots of info, including the philatelic industry's standard Scott Catalog ID number for this stamp (#1309) and a wide variety of versions (including First-Day Covers) for sale on eBay and other sites. Most interesting to me was the 26-page program for the first-day festivities, whose description included "It also describes Delavan's circus history, including circuses that originated or quartered in Delavan."

Also found was this article in the Linn's Stamp newspaper that said the famous clown Lou Jacobs was the inspiration for the clown used on the stamp.

[Dan: I checked: Lou Jacobs was very clearly the model clown used for the stamp and the statue. Fascinating.]

That led me to search for info on Lou, finding biographies on Wikipedia, and also a new "-pedia" to me: Circopedia - The Free Encyclopedia of the International Circus.

Jacobs was in the first class (1989) inducted into the International Clown Hall of Fame, which was founded in Delavan in 1987, but moved to Milwaukee in 1997, and is now located in Baraboo, Wisconsin.

[Dan: Interestingly, I found that one of Lou's daughter's, Lou Ann, became an elephant trainer.]

Bottom line:  Romeo was a big and bad circus elephant that was famous in the 19th century.  He led a an unhappy life, and is commemorated as perhaps the biggest (literally) star from the circus town of Delavan, Wisconsin.  Hence the statues of Romeo, a clown (Lou Jacobs), and (nearby) a giraffe.

1. No surprise, but not everything you read is true... even in books. To be precise, by doing everything I could to find some validation for the story of Romeo and Juliet, I was able to find that Romeo was in fact a killer, and a generally bad elephant (but also that he was terribly abused during his lifetime).  I was not able to verify the story of Juliet being dropped into Lake Delavan, although it seems plausible.

2. Once again, archival newspapers are a fantastic resource.  Check out your local library to see if you have access to Newspapers.com  -- or, barring that, use one of the other archival news sites we've discussed (e.g., Chronicling America)

3. Sometimes just asking the question is better than trying to guess the shortest possible query!  This is a big change from a few years ago.  When in doubt, try this first!

Thanks again to Meredith Lowe, who first mentioned elephants and their bones in Wisconsin to me over coffee in Delavan. Thanks!