I wanted to understand how/why and how-much money was involved in the landings, what was being exported, and what lead to their eventual disappearance.

I knew that there was Cooley's Landing in Palo Alto, Dixon Landing down in San Jose... and I knew of Guth's Landing.  I figured that was a fairly rare term ("Guth"), so I started with that.


let me know there's a copy in the San Jose public library.  But (the note says at the SJPL), "see librarian."  Gee thanks.  I won't get down there for a month at best.  (I want to write to a friend at the library and ask "couldn't you just take a quick photo of it with your iPhone and send me the image?" I didn't though.)

Okay... so I tried modifying my search to:


And that wasn't great.  I was having a hard time getting exactly what I wanted, so I used the intext: operator  like this to make SURE the text was on the page:

... and THAT got me to this remarkable map produced by the City of Oakland Museum! 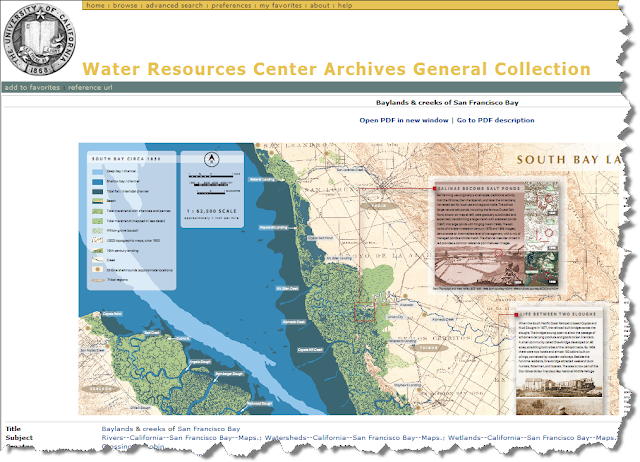 If you click through to the link (caution:  it's a slow download), you can get the PDF of the map and just read-off all of the landings around the South Bay.

And the text on the map gave me a bit more insight.  There's a panel about the city of Drawbridge which was a small town with two hotels and duck-hunting cabins that was created when the railroads built a bridge across the bay in 1877.  That's a useful date to remember.

So I did another query:

(The 1800..1900 restricts numbers between those years in the results.)  The first hit in the list was for a historical note about Roberts Landing.  Although that's really mid-bay, I figured it would be useful.  And it was.

"Captain William Roberts established the port in 1851 to take locally-grown hay, fruits, and vegetables across the Bay to San Francisco. Warehouses and docks were built here along the slough. Flat-bottomed two-masted scow scooners sailed in and out of the slough at high tide. Roberts Landing lasted until the 1870's. It was put out of business, like many other transportation ventures on the Bay, by the transcontinental railroad."

That's the first bit of evidence:  The landings were primarily for "scow scooners" that could get in/out of the sloughs at high tide.  And it looks like the cheaper/faster rail transportation spelled the end for the landings system.

Now I've got an idea.  That phrase, "scow scooner" sounds like something that was particular to this time and place.  I poked around a bit, and quickly discovered that the conventional spelling is "scow schooner."

The results look great.  Turns out that there's still one of these ships around, berthed at the Hyde Street Pier (in  the middle of Fisherman's Wharf in San Francisco).  The Wikipedia article on the Alma is pretty good.  From that article:  "Like the many other local scow schooners of that time, she was designed to haul goods on and around San Francisco Bay...carrying hay and lumber..."

Interestingly, the article goes on to say "..the scows’ strong, sturdy hulls could rest safely and securely on the bottom and provided a flat, stable platform for loading and unloading..."  That makes sense.  From the map above we can see that the landings were pretty shallow drafts.  Any boat going in/out of a landing would have to be able to handle sitting flat on the mud.  (Which would be nice for loading and unloading.  Putting heavy loads onto a tippy boat is never fun, and this would have provided huge stability.)

I also found what looks to be a fabulous book "Scow Schooners of San Francisco Bay," but while it's IN Google Books, it's not viewable, which is a pity. (If I could see it, there's a good chance I would have bought.)  But Google Books told me it's in the Mountain View Library, so I'll go pick it up there.

Until then... I also found from this search (via the Rengstorff House site) that Rengstorff Landing was used for shipping farm products (primarily hay, barley, wheat, lumber) and people in the era before bridges crossed the bay.  I also found that Henry Regstorff's landing journal (daily shipments invoices!) from 1879-1883 was recently found and has been digitized... but it not yet on the web!  Luckily, my bike path to work happens to pass the Rengstorff House, so I'll stop in there to see what they can show me.

I started to focus on finding information about particular locations.  Now that I knew about Rengstorff Landing, what about the others?  To find out more, I zoomed in on the commercial aspects of the landings.

[ commerce "Cooley Landing" san francisco ]
At the same time, Cooley Landing (the next landing to the north) was specializing in brick export.  In 1873, William Hunter and Thomas J. Shackleford, searched for clay suitable for bricks and a site for a new brick plant. Finding both on the property of Lester P. Cooley at Ravenswood (now East Palo Alto), they set up a brick foundry on five acres of land near Cooley's Landing, opening their factory in 1874.

This included seven field kilns and a number of pugmills. Wood for fuel was hauled from the mountains just to the west. The clay pit (site now Jack Farrell Park) was north of the kilns. They ran rail cars to Cooley Landing and shipped bricks to San Francisco using their own ships "Dora" and "Heckla". They produced about 40,000 bricks a day, or around 40 million during the 10 years of operation before exhausting the clay pit.

This image from CalBrick's history of brickmaking in San Francisco shows Cooley's Landing, with two brick kilns and the short railway to the Landing.  A scow is heading out with a delivery. From Moore and DePue Illustrated History of San Mateo County (1878).

The end of the landings:  The age of the landings seems to have petered out around 1900 when the first rail lines (established in 1880's) started to haul the fruit from orchards and hay to the cities more rapidly and reliably than tide-bound scows.  They settled into other roles--Cooley Landing became a dump and a base for bridge construction.  It's now closed to the public, and rotting away slowly.  All of the other landings are long gone.  Some of them have been buried in landfill (Guth's Landing is now part of a business district), and others like Dixon Landing or Mowry Landing are placenames only.

What does this tell us about search?  The first and most obvious is that I wasn't able to find any economic data about the landings.  They were clearly important, perhaps even essential to the developing economies of the lower San Francisco Bay region, but it's hard to be sure of that without at least an estimate of the total volumes of products shipped out via the landings versus the quantity that was shipped via roads or rail.

So... until someone writes an article or book about the details of the economies of the South Bay, it's hard to get beyond what we've found so far.

Or... I'll have to go around to the libraries and check out those books, dig up those journals and do old-fashioned legwork the way you used to have to do.  It's like research used to be: Stuff is scattered all over, and you need to do some work to assemble the collection of information you need.

Old place names:  Some of the searches I did were spectacularly unhelpful.  A query like [ "mowry landing" history ] triggers a bunch of sites that seem to exist only to fill in the blank spaces.  Very little could be found that was real information.  Luckily, these poor quality sites are easy to recognize as junk.

ROSS Nelson gave a great answer to the question:   In a private email to me (which he has allowed me to share with you) he writes...

Shipping on the Bay seems to have been at its peak between 1840-1870, when the railways took over.

First I looked up Cooley Landing to see when it was operational, from there, just focused on including relevant key words, e.g.,

There were tidbits in each of historical backgrounds for Cooley and Rengstorff and a nice payoff for when I found Alviso. I'd swap in different cities as discovered and used "19th century" or "agricultural shipping" once I discoved the main products.
If I were going to be methodical about it, I probably look at the history of each of the bay area cities.  Lacking a book in regional history, that seems to be the best source (along with those development plans!) and piece it together.  Interesting how once-thriving places (the formerly thriving cities of Ravenswood or Alviso) are basically non-existent today, primarily because of the railways.