Answer: Which sword is larger?

Answer:  the one in Germany is larger.


First, start your search with the obvious--what the heck is a "Varusschlacht"?


Clicking on the Wikipedia article (and perhaps translating it from the German) you'll find that this is the German term for the Battle of the Teutoburg Forest, a victory for the German tribes (led by Arminius, who was later known as Hermann, for various obscure reasons) over three rather well-equipped Roman legions.   It is said that when the battle site was rediscovered it was a "debris field" 15 miles long and up to 1 mile wide.  This was a BIG battle.


As you can imagine, this has been a point of German national pride for a long time, ever since it was written about by Suetonius in his classic book  De vita Caesarum ("On the Life of the Caesars") and then picked up later as an unforgettable tale of Germanic superiority.


In any event, the in the middle 1800's, the Germans built a mighty statue, the Hermannsdenkmal in Ostwestfalen-Lippe in Germany in the Southern part of the Teutoburg Forest.   On the Wikipedia article it's noted that the sword is 7 meters long.  A quick search for other sites show confirmation--so I believe the Hermannsdenkmal statute sword is 7 meters (22.96 feet).


But, interestingly enough, German emigres ALSO built a near-duplicate of the Hermannsdenkmal near New Ulm in Minnesota.  And here's where the search gets fun.


From the Wikipedia article it's simple to find the Hermann Monument near New Ulm in Minnesota... and all kinds of information about it.   But not the sword length.  So we're going to have to use more direct means.


It's simple to search for various images of the Hermann Monument.  It's easy to find the height of the statue by doing a quick visual analysis of an image.

From the official Hermann Monument site I found this nice image of the statue.  Using my favorite image editor, I drew a couple of lines--one for the sword, one for the height of the statute. 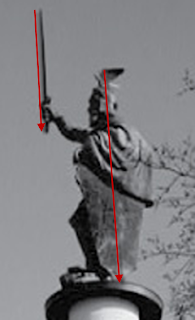 By measuring the length of the lines in pixels (an easy thing to read off from the editor as you're drawing), I find that the length-of-sword / height-of-statue is 219 pixels / 382 pixels... or 0.57.

And now I know the New Ulm statue's sword is 4.69 M (15.39 feet)
This is pretty simple photogrametry, but it's a nice example of deriving simple facts from indirect measurement.
AND yes... I should worry about the fact that this photo was taken from the side and that there's a geometric shortening of the sword, but I'm not going to worry about.  (A quick back-of-the-envelope computation tells me that the difference is going to be < 5% of total length, so it doesn't matter for my question.)
Search Lessons:
1.  Unusual words (such as "varusschlact") can be translated, or the web pages they lead to can be translated.  You can them work back to English sources (or work directly from the German pages).
2.  Sometimes you just have to measure things directly, or in this case, indirectly by measuring properties of the photograph.
Note that "sword length" was pretty easy to just look-up for the Hermannsdenkmal, but impossible for the New Ulm Hermann Monument.  Not all properties have equal prominence across all things within a category.  (I'm willing to bet that most web pages on statues do not mention "sword length"!)
Posted by Dan Russell at 11:20 AM