Answer: Is that a musical instrument?

Quick answer:  It’s a “mouth bow” and it’s from… well… all over.  There IS no distinct country of origin!

Of the people who wrote in with answers, the average time to solve this particular problem was 5.9 minutes with a median of 5 minutes.  Of course, we don’t know how long the people who never solved the challenge took!  Presumably, they didn’t leave a comment.

Of the searchers who found the answer quickly (in less than 5 minutes), nearly all started with some variation of the search terms [ mouthbow musical ]

That’s an excellent start to a search when you don’t have any idea what the target is—just describe it as simply and plainly as possible, and let the internet do the heavy lifting for you.  Searchers who started with a simple search found what they wanted fast.

Search lesson:  Start simple, especially when searching for something that you know nothing about!

Origins:  Once you start down this path of trying to figure out where it comes from, you quickly find that mouth bows seem to come from everywhere.

The Tsonga - Shangaan people called these Umqamgala (aka, “musical flute bow”) found in Southern Africa among the Tsonga or Zulu. 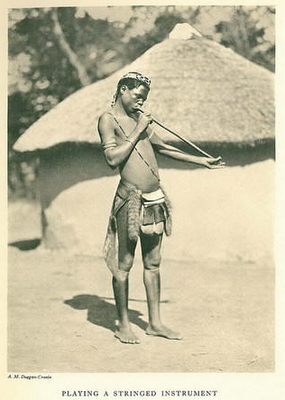 This picture is from the Ezakwantu gallery of historic African instruments.

The Ndono (Tanzania) have their own version (audio file), and Chipendani can be found in Zimbabwe.  I can go on.  Once you start digging, you can find these things throughout all of Africa.

A similar instrument, the berimbau,  is found in Brazil.   Although it’s somewhat different (with a gourd resonator that can be used to produce different effects), it too seems to have come out of Africa. 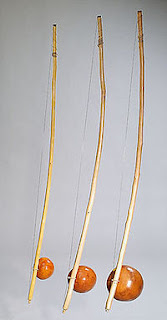 In Polynesia, the pakuru is the same instrument, although probably invented independently.

Since the instrument is as simple as having a bow with a string, it's likely that the mouth bow was invented multiple places in multiple times.  It's said that there are cave paintings in France that depict mouth bows in use from ~13,000 BCE (but I wasn't able to find independent confirmation of this--if anyone can find a definitive photograph of this, I'd appreciate hearing about it).

Search lesson:  Be sure to double-check your findings, particularly about things (like point of mouth-bow origin) that could potentially have multiple interpretations.  While many of the comments are correct about where the mouth-bow can be found, very few people pointed out that they seem to come from everywhere.  In general, for results like this you want to try and disconfirm what you've found.  Sometimes you'll stumble into entirely new categories of insights when you do!

A couple of nice examples of mouth-bows--the first is an umqangala from Africa, the second is an American Appalachian mouth-bow.

footnote:  Worth noting that all of these instruments are variations on a common theme—a string held under tension, then plucked or hit with a stick, and using the mouth as a resonator.  It’s very similar to a Jew’s harp (aka  jaw harp, aka mouth harp), but those instruments usually have a metal frame holding a metal tang (rather than a string or wire) that’s struck.