Answer: Where are you?

Fast answer:  Our amnesiac friend is in the Google offices in the Warsaw Financial Center at Emilii Plater 53, Warsaw, Poland.  The phone number is +48 22 207 19 00 and this photo is taken from the 10th floor.

That’s a remarkable amount of information from just one picture.  How do you do it?

In a case like this, you have to start with what you have.  Look at the image (click on it to get the high-res version of the image).

There are only a few things to really start with.  Two buildings have logos that might be useful, and there’s a flag in the lower left corner.  A quick check of the flags-of-the-world shows that this is an Egyptian flag, but surely isn’t Cairo or anywhere else in Egypt, so that’s just a false lead.

Let’s try searching for one of the two logos.  I searched first for the closest and most obvious logo atop the building labeled "TP."  (I ALSO chose this because the building is clearly pretty new and pretty much a trophy building… I figured there would be a good chance that someone would have put up a web page on it.)  I tried queries like [ tp logo ] but didn't have much luck until...

I searched for [tp office building] and voila!  This is pretty clearly the Telekomunikacja Polska building in Warsaw, Poland.  A nice webpage is at: http://www.tp-ir.pl/  (The first result on the search page was to a site that had all the skyscrapers of Warsaw labeled.  This is clearly that building.)  A quick Wikipedia search for confirmation, and you'll see all is lining up--this is the TP building.   Wikipedia page (w/ image)

You can also figure this out by doing an Image search for [ tp ] – yeah, it seems unlikely, but the TP logo shows up on the first page of Image results, and that leads you to the Telekomunikacja Polska website.

Knowing this, I could easily get the street address for the TP building: 14/16 Twarda Street, Warsaw.

Now, how to find where the photo was taken FROM? 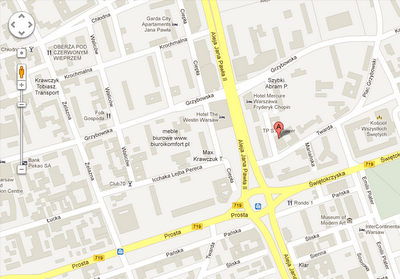 I tried doing this with Google Maps, but I couldn’t quite get the angle I wanted to verify where the photo was taken from.  That’s when I realized this was really a Google Earth problem.

Searching in Google Earth for the TP building at 14/16 Twarda Street, I was able to get to exactly the same view I see in Maps, but if you turn on the 3D buildings layer, you get a very different perspective.

I then just flew around in Google Earth until I pretty much matched the view.

Once I had the view matched with the photograph (which I did by lining up the buildings), I literally “turned around” in Earth to see the building, double-clicked on the building, and up pops the information:  Warsaw Financial Center.

Now… how to figure out what office/floor you’re on?   You can estimate it by looking at the altitude of the view, something that Google Earth tells you in the lower right corner.  From that number (120 meters), we can guess we're somewhere around the 15th floor or so.  But to get the exact floor?  Ah... THIS takes a little detective work!

When I opened the large image, I noticed an odd blue set of squiggles on the image. What's up with that?  I zoomed in a bit and...

It looked like backwards writing, so a quick copy/paste into my favorite image editor, a flip-horizontal so I can see what it is, and another AHA! It’s the Google logo!  (Surprise!)

From there, it’s not hard to find the Google offices in the Warsaw Financial Center, which tell us the exact floor (10th) and phone number.

Search [google offices warsaw] to find that the information is at: http://www.google.com/about/company/address.html

And once you have THAT information, it's pretty straightforward to figure out that the Google offices are on the 10th floor.

Search Lessons:  There are a few here...

(1) Sometimes clues can be misleading (the Egyptian flag).  It's important to NOT get bogged down in dead ends, but be willing to change your strategy on the fly.
(2) Google's Search By Image, while a great tool, will have difficulty on a cityscape like this unless it happens to be a well-known view (such as the view of Paris from standard photo spots).  So you probably have to use Maps or, as in this example, Google Earth.
(3) Google Earth is a valuable search tool when you're looking for objects that you can't identify otherwise.  In this case, we could align the photo with the 3D buildings and literally work backwards to identify the Warsaw Financial Tower.
(4) Sometimes clues are hidden in the details.   In the case of the Google logo appearing reflected in the glass, it becomes apparent once you isolate that part of the image, magnify it, and reflect it around the Y axis.  That one clue then lets you figure out the exact location.

Above all, you just have to think like a detective.