Editor's update:  Note that I made an error in this post that I have noted in an Erratum note (8/25/14).  Leon Czolgosz was never a member of the Oneida Colony.  Click here to see the full post-mortem analysis of what I did wrong.

Well, no, actually, it's a phrase from the 1860s.  And that observation is what made me start wondering where ideas come from, how they're connected to present.

So, how does one find a connection between different, apparently wildly different ideas?  In his brilliant series of PBS television shows, Connections, historian of science James Burke would show how a long (and apparently implausible) series of connections would link one technological invention with basic discoveries made elsewhere in time and distant.

In essence, when we're looking for connections of our own, the best strategy is to search for a meeting point from both ends and look for common ground in the middle.  How does that play out for this question?

Let's start with the idea of "free love" as a commonly used phrase.  While the idea of free love has been around for a long, long time, the modern common usage can be traced back fairly easily.


leads quickly to either Christian socialist writer and religious leader John Humphrey Noyes (1811 - 1886) or to Austrian psychiatrist Wilhelm Reich (1897 – 1957).  Since Noyes was the earlier of the two, I started with him.

Searching inside of the Google News Archives, it was simple enough to find multiple references (especially in his obituaries) to his use of the phrase "free love."  And then a quick look in Google Books for [ Noyes "free love" ] lead me to Without Sin: The Life and Death of the Oneida Community, Spencer Klaw (1994) where you can find that "in the late summer of 1852, in an article in the Circular [the Colony’s newsletter]  he [Noyes] boldly included “Cultivation of Free Love” in a list of principles that the community stood for." That seems pretty definitive to me.

I read a bit about Noyes, then suspended work on that end of the connection to figure out how to link Noyes with McKinley's assassin.

leads to Leon Czolgosz, who shot President McKinley at Pan-American Exposition reception on September 6, 1901.  Czolgosz, a native of Michigan and an avowed radical anarchist ( who hung out with people like Emma Goldman) was, for a short time, a member of the Oneida Colony.

Wait.  Hadn't I just seen something about Oneida when reading about Noyes?

Yes, John Humphrey Noyes, was the founder of the Oneida Colony, a community that advocated Biblically-based communism, group-marriage, and used the term “free love” (which they also called “complex marriage”) to describe what they believed was the proper organization of men and women in an open, group marriage.

But there's the connection:  Czolgosz was briefly a member of the Oneida Colony (where, apparently, he did not fit in especially well), where free love was practiced as a policy for Noyes' complex marriage.

Interestingly enough, the assassin of President Garfield, Charles Julius Guiteau, was also a member of the Oneida colony.  Suggesting, perhaps, that free love wasn't enough to prevent homicide in the first degree.

Search lesson:  Here's a diagram that might help explain my process. 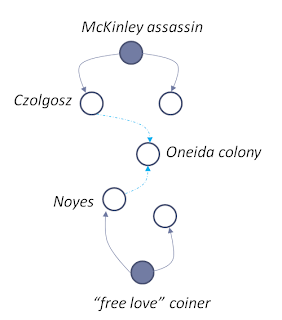 I started at the bottom node ("free love" coiner) and in reading around, found that it was Noyes.

I then switched to exploring from the top, working on the McKinley assassin and finding Czolgosz.  This wasn't especially hard--the common idea ("Oneida colony") was in the overlap between the two topics.

Naturally, longer chains of connections are harder to ferret out as the number of nodes between the two gets larger and larger rather quickly.  When doing this kind of research, keeping a notebook with common topics, places, and people you run across can be handy.