Search Challenge (July 18, 2012): How much did Jefferson think about wine?

Thomas Jefferson, the third president of the United States, was famous for many things—writing the Declaration of Independence, being a scientist, founding the University of Virginia, designing Monticello, traveling widely in the 18th century, inventing new agricultural practices—the list goes on and impressively on.  He was our first nerd president, a polymath of the first order. 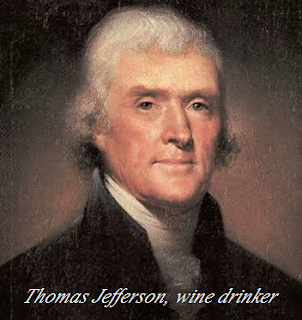 He was also reknown for his wine collection, his taste and perception being on par with the best in the world.  This is a quotation from a letter to a man he called "Doctor."

“I have lived temperately....I double the Doctor's recommendation of a glass and a half of wine each day and even treble it with a friend.”

So now I'm curious--how much DID Thomas Jefferson think about wine?  I can't measure how much he thought about it, but we CAN search out how often he wrote about it to friends.

1.  (Easy) Who was Jefferson writing to when he wrote this famous line about “I have lived temperately… I double the Doctor’s recommendation…”?  What was the correspondent’s name?

2.  (Medium) Amazingly enough, more than 200 years later, the correspondent’s house still stands.  What color was that person’s house in 2009?

3.  (Hard)  How many times did Jefferson refer to wine in ALL of his writings?

As usual, please tell us not just the answer, but also HOW you found the answer, and how long it took you to find it!