Yesterday I asked 3 questions about this image...

1.  Who is the inventor of this gadget?

2.  What is the name of the river that prompted this call for improvements?

3.  What did he propose doing to improve the river?

Here's what I did when I started my search.

I used Google's Search by Image feature.  (If you've taken the Power Searching class, you've seen this in action--or see the video demo below.)   The basic idea is that you can drag and drop the image from the blog into the Image search bar from the desktop and find references to this image.

Once I did that, I found that the most likely query was [ Abraham Lincoln's patent ] (see the suggested query in the  query box!).

I was curious about this, so I went to Google Patent search (Patents.Google.com) and did the obvious query: [ abraham lincoln ] and was rewarded with his original patent for "Bouying vessels over shoals"!  You can download the entire PDF if you're curious. 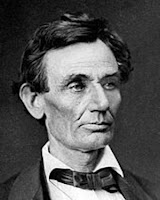 My next query was: [ Abraham Lincoln river navigation ] which leads quickly to a summary of his invention and the backstory behind it.  There you can read a quick summary of his travails on the Sangamon (or Sangamo) river, where he moved with his family when he was 21 in 1828.  He had such problems with rafting on the river, that it was no surprise when he proposed improving the navigability of the river in 1832 in his very first political speech.

I found his proposal by searching for [ Abraham Lincoln Sangamon improvement ] and finding the transcript of his first speech at New Salem, Illinois, discovered that he proposed channelizing (that is, straightening out the normal meanders of the river) to make the river easier to navigate and faster in flow.

So the short answers:

1.  Who invented that device?  A:  Abraham Lincoln

2.  Name of the river that prompted the invention?  A:  Sangamon (aka Sangamo), a river that he had to navigate many times (and lived very near).  It was full of shoals, hence the invention.

3.  What did he propose doing to the river?  A:  Channelizing it to reduce the number of shoals, clear the banks and increase the stream speed.


And... that YouTube video on how to Search by Image..