Answer: Why is that blank spot so special?

ANSWER:  That blank spot (at 450 N. Whisman St in Mountain View) is special because it's the right of way for two pipelines (Bay Division Pipelines 3 & 4) that carry water from the Hetch Hetchy reservoir in the Sierra down to the Pulgas Water Temple (at lat/long 37.48309, -122.31522), and subsequently to the people of the San Francisco peninsula.

Here’s what I did to answer the question.

First, I zoomed in a bit on the image to read that sign on the left side of the photo.  It says “Hetch Hetchy Trail”  pretty clearly.  If you squint, you can also see “City of Mountain View,” but you probably already figured that out since I said “I was riding my bike between two Google buildings.”

My first search was to start with what I knew:

My very first result was a Google Map.  So I clicked through on that to see where it was.  A couple of seconds of exploring with Streetview showed me that the picture is from roughly 450 N. Whisman St., Mountain View.

Given the presence of all the small white boxes and concrete utility sheds, I thought that something odd was going on here.  Look at the other side of the street.

This wasn’t JUST an empty field—and a look at the larger map suggested something even bigger was going on..  I sketched in the red line to follow those long, narrow property parcels.

Now I’m suspicious that this might be part of some kind of infrastructure—maybe buried power lines, a gas pipeline right of way, or something similar.  That sequence of long-skinny property lines is just too odd.  And if you zoom out ever farther, you can trace this corridor even farther.  It seems to go to the east and to the north.

At this point I start to get curious about the other piece of data in the challenge.  What’s with that lat/long that was specified?

Another map search shows this at the specified lat/long: 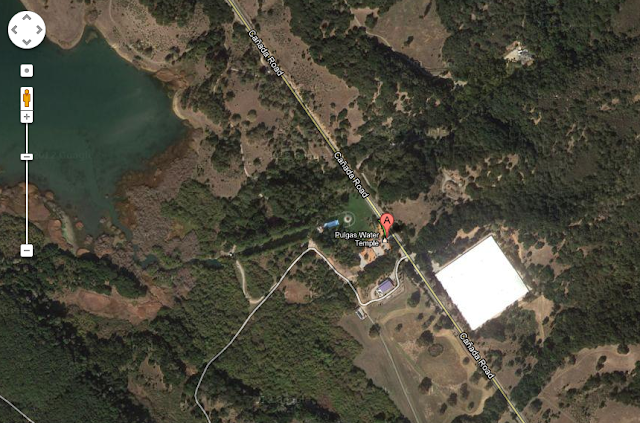 This shows up on the map as the Pulgas Water temple.  And what, pray tell is that?  Search to the rescue:

Reveals that this is stone temple-shaped building that commemorates the completion (in 1934) of the Hetch Hetchy  aqueduct.

A ha!  Here’s a connection between the Pulgas Water Temple and the trail in Mountain View.

I then did a search for:

and discovered a whole raft of stories from the local newspaper about the trail, the possibility of houses being built on this otherwise unused parcel of land, etc etc. See: http://www.mv-voice.com/news/show_story.php?id=542
But it pretty clearly shows that this empty plot is, indeed, the right-of-way for the Hetch Hetchy aqueduct.

Despite all of that, the easement for the pipeline doesn’t really encourage housing built on top of it.  As was noted in the Mountain view Voice in 2007,   -- “The Hetch Hetchy right-of-way is owned by the San Francisco Public Utilities Commission and runs east-west through the city for 3.57 miles, along the path of the Hetch Hetchy aqueduct. To make servicing the massive underground aqueduct possible, no buildings may be built on top of it.” So the development might have been doomed from the very start.  (This is why you do research BEFORE investing a lot of effort in planning buildings that can’t be built!)

Interestingly, in reading about the Hetch Hetchy aqueduct I looked at the Wikipedia article and found a nice map of the aqueduct   But it doesn’t go through Mountain View!  What’s up with that?  That’s when I noted that the Wikipedia map is WAY out of date.  (Note the pub date of 1922)  Moral:  Check your sources.

Curious, I poked around a little bit more and found that the aqueduct is actually several different pipes that start at Hetch Hetchy reservoir in the Sierras—including the pipeline that runs through Mountain View—the “Bay Division Pipeline.”  I discovered that this pipes, BDPL, in particular, pipes 3 & 4 go on the southern route through the cities of Fremont, Milpitas, Mountain View, Palo Alto and Woodside.

(NOTE:  need quotes here, otherwise won’t find the city of MV... too many other "mountains" and "views" in these hits as well.)

Looking at the 4th result led me to the San Francisco Planning Department, which is the home agency for all things Hetch Hetchy and aqueducty.   A little poking around led to me a fairly long planning document with a reasonably high-res map that confirms that the trail parallels the pipeline of BDPL 3 & 4.

Here's a piece of their map (from: http://www.sf-planning.org/Modules/ShowDocument.aspx?documentid=7946 ) 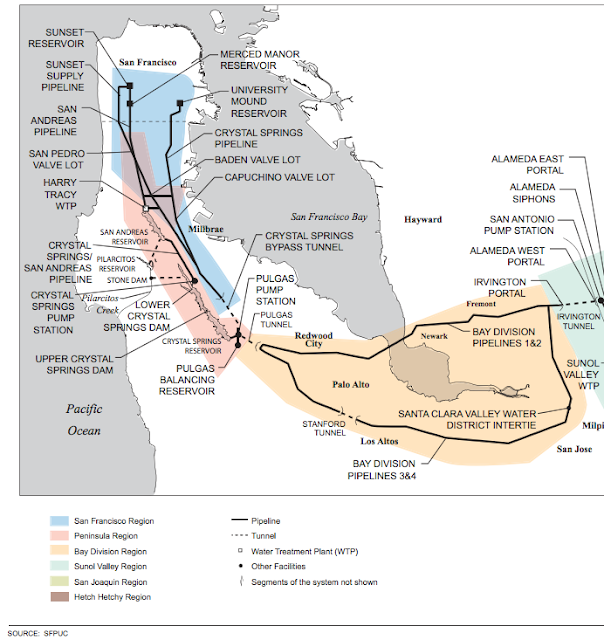 This map, from the owners of the pipelines, clearly shows the connection running from the Sierras, through Mountain View (next to Los Altos) and to the Pulpas Pump Station.

And, to find more maps, I did an Image search with the query:

I know now that the technical term “BDPL” was pretty likely to find me planning documents… and in planning documents are often the fascinating details, like this map from SF Water & Sewer, which shows the streets and the BDPLs in detail...

There are even more detailed maps in the “Crossovers Construction project”

More generally, if you’re interested in this kind of backstory, check out the Aquafornia site, and their article about the aqueduct, "Where does California's water come from?"

One of our regular readers used Google Maps to track the parcel lines to the east, and found that you can actually see the point where the pipe goes into the east bay hills at 37.54798,-121.931914 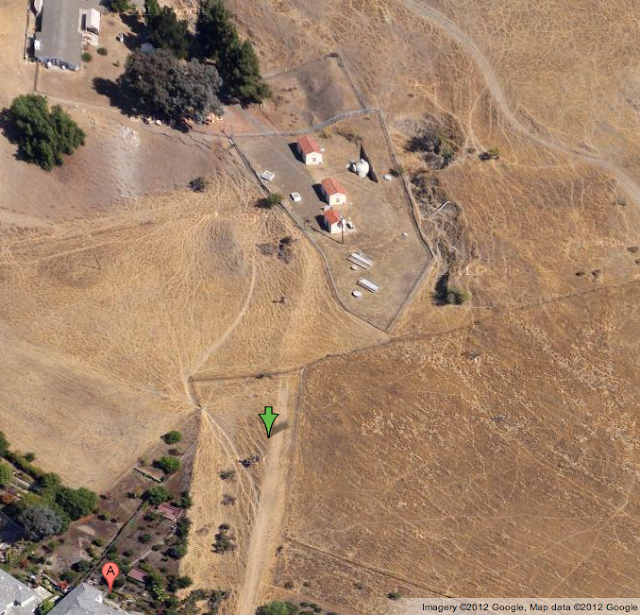 The round thing is the connector for the pipeline as it enters the hill, and you can see the easement coming up from the bottom of the picture.

Search Lessons:  This might be a bit much about pipelines, so let’s take a step back.  What did we learn about search?

1.  Start with what you’ve got.  In this case, we had both the name of the trail (“Hetch Hetchy Trail”) and the lat/long.  Looking at both gave us useful information.

2.  Look for connections.  Since both trail and water-temple refered to the Hetch Hetchy Aqueduct, it was pretty easy to figure out that we needed to find the track of the aqueduct.  Then, after noticing that some of the maps we looked at were out-of-date, we went on to...

3.  Find technical documents using the technical terms you discover.  Words like “aqueduct” seem pretty technical, but nothing bets a good acronym for searchability.  In this case, we discovered that DBPL was the name that the water department planning organization used—so using THAT term in a search is almost guaranteed to work out.

And lastly.. the John Muir connection?  A search for:

... shows quickly that he worked tirelessly for years to prevent the damming of Hetchy Hetchy (which *was* a beautiful valley in the Sierra, just north of Yosemite).  In the end, he lost the effort… and now water from the Hetch Hetchy valley flows through BDPL 3 and 4 through Mountain View, under a vacant lot.