Answer: Who started the library?

It's a beautiful image, but in order to start, I had to zoom in on the image to read the inscription.  Once zoomed in, I could read the  name:  George Hicks Fancher.

A quick search on that name shows me that it’s pretty rare, but that there a cluster of Fanchers in Central California (in the middle of that areas rich agricultural land, especially near the city of Merced).

That gave me one version of the story.  It also confirmed that I had the right location in Merced.

But I really wanted  some confirmation of the story, so I did a search in Google Books

and quickly found the judgment of the court in an issue of “The Pacific Reporter” (which is, as the “About this book” metadata tells me, the “all the decisions of the Supreme Courts of California, Kansas, …”  So now I could read about the court case! 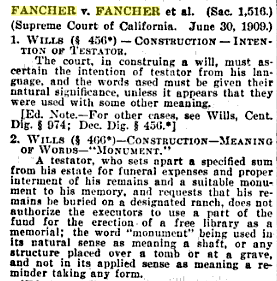 Later in this judgment, the court *reverses* the judgment of a lower court, which had found for the appelante.  “The full amount of the fund devoted to the purpose, or such part as they see fit, may be expended in the erection of a monument to the deceased.  It is merely held that the erection of a public building is not within the intent of the testator as expressed in his will.”

What I found especially interesting was that the suit was brought by Jonathan W. Fancher against Lee R. Fancher.  This sounds a bit like a sibling squabble that was resolved in the courts!

confirmed that this was the very same one.  I got the lat/long from the Waymarking site (a collection of interesting places)  and I confirmed it with Google Streetview.

(I also learned that I shouldn’t pay attention to the city of “Tuttle,” which never came up in these searches.)

So, what library WOULD have been constructed with the monies?  Probably the Merced library, so I started searching for the history of that library.

I figured I’d start with Google News, hoping to find some mention about the library in the local news.  My next query was in Google News:

I was going to search through the Archives, but I was struck by the fact that I only had 1 result!  That happens so rarely that I had to click through.  In this case, it was a Pintrest post  labeled “Headquarters - Merced County FreeLibrary & Merced City Library, March 1915”

Fascinating.  This one Pintrest photo ALSO taught me that maybe the right phrase wasn’t “city library” but “Merced County Free Library”!  Perhaps I’d been making an assumption that back in 1900 it would have been a city library rather than a country library.  And that term “free”—was that also part of the name?

Armed with this insight, my next query was for

and that was paydirt.  I quickly found the Merced library’s archive, their centennial celebration site,  and in there, I learned about the work of Antoinette M. Humphreys. 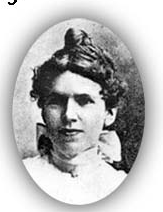 It’s clear from this page that she wrote a book “How the Merced County Free Library System Has Been Worked Out” (July, 1911).

Books:  [ "how the merced county free library system has been worked out" ]

Interesting.  I already knew about the “WCTU”  but had never heard of the WTCU.  Were the letters just swapped, or was there another organization I didn’t know about.  A quick check, and it became clear that this was just a typo.  It really was the “Women’s Christian Temperance Union.”

As you probably know, the WCTU was a powerful force in the late 1800’s – early 1900’s in the US.  They were a powerful advocate for “temperance” in any kind of drink, and they largely drove the adoption of the 18th Amendment, leading to Prohibition.

I checked the online catalog at the Merced County library, but couldn’t find any way to figure out what the original collection contained, so I can’t quite figure out what books were given to the library initially.  I’ll try giving them a call later today to see if they have that information.

I did discover that the Merced County library offers book in English, Spanish, Armenian, and—much to my surprise—Punjabi!  I knew there are substantial Hispanic and Armenian populations there, but the Punjabis surprised me.

I DID find that the Merced library has a book of some interest, one that was possibly in the initial bequest from the WCTU:  A history of the Woman's Christian Temperance Union of Northern and Central California / written by request of the State Convention of 1911, by Mrs. Dorcas James Spencer.  (They gave their books TITLES in those days.)

Oddly enough, even though Google digitized the book, you can’t read it on Google Books.  Luckily, the Hathi Trust has made it available.  Fascinating reading, if you want insight into the minds of the temperance movement at the time.  http://catalog.hathitrust.org/Record/008428992

Search Lessons:  There are many here...

1.  Stay open to things you learn along the way.  That one Pintrest post gave me the right name for the library.  I sure I could have found it another way, but it was a quick and direct link to the library's centennial page.

2.  Note that legal documents can often have a wealth of interesting background information.  For example, it was brother-against-brother.

3.  It's sometimes useful to keep looking beyond Google's boundaries.  In this case, I was able to get from the Google Books page to the Hathi Trust.  You should know about the Hathi Trust, as they have made lots of content available that's just not possible to get in any other way.

4.  And finally, sometimes you really just need to zoom in a bit to get enough detail to proceed with your search.