Answer: When did the windmills arrive?

There are at least 3 different ways to solve this problem.  Here they are:

I actually started by looking around in Google Maps.  Since I knew pretty much where those windmills were, I figured I could easily spot them in the landscape.

But I was wrong.  After scrolling around looking for telltale shadows on likely-looking ridges, I found nothing.  That’s worrisome, but okay—searches go like that sometimes.

So I shifted strategies and used the “Photos” to locate a likely looking picture. 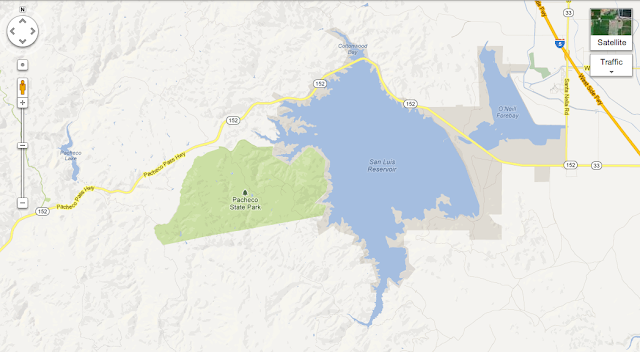 In this map, I clicked on Photos (under the Satellite view menu).  Note the image with the windmill in the lower part of this image. 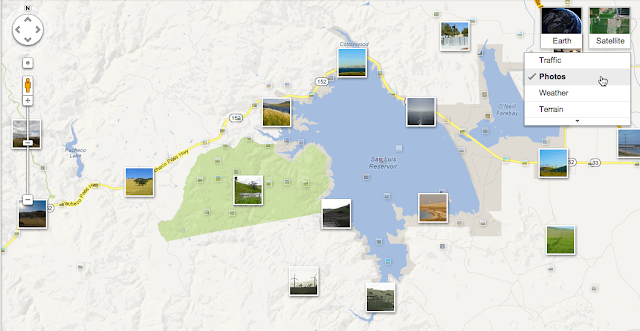 One of them was this  image: https://ssl.panoramio.com/photo/1126354  (I note that reader “Drop the Gloves” found a different image, but the result is the same.  Both photos were geo-located correctly.)

And NOW I can see the shadows of the windmills in the satellite photos. 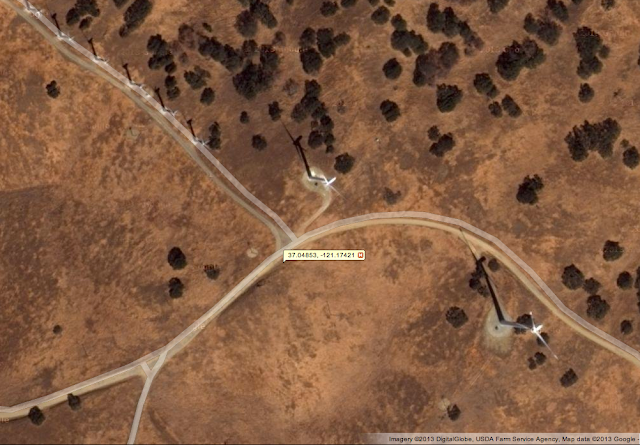 Rather than following the Maps strategy, another way to solve this challenge was through regular web search.

This leads me to the Pacheco Pass Wikipedia page

Which has the comment:   “There is a small windfarm located at the top of the pass that can be seen from Dinosaur Point Road.”  (Notice in passing that Google synonymized “windfarm” with my search term “windmills,” which was pretty clever, and was an expansion it would have taken me a long while to come up with on my own.)

So from this I learned that the windmills are actually inside the boundary of Pacheco Pass State Park.

I also learned that a better search term might be “wind turbine.”  My next search was:

Which led me to the site for International Turbine Research--which tells me that this is developer, and I'm assuming owner, of the windmills.

Doing a search for that led me to their homepage (http://itrinc.net/). Under the link for Origins, it states that:

But I like to second source everything.  So I did one-more-search… This time in Google Books (figuring that someone would have written a comment about this windy pass in a book sometime in the past 30 years).

Which shows a number of results, including: Wind energy in America: a history,  Robert W Righter, lists ITR as “owning and operating 163 turbines in Pacheco Pass.”

But digging a little deeper, another book: Charging Ahead: The Business of RenewableEnergy and What It Means for America,  John J. Berger, I find that US Windpower leased “5,600 acres of land in Pacheco Pass” in the late 1970s.

That's interesting.  So I follow-up with a quick search in Google News:

which leads me to a newspaper article in the Bangor Daily News (April 20, 1979).  "A private firm plans to build 20 windmills... in a $20 million project undertaken by US Windpower, Inc."

The company, based in Burlington, Mass., was headed by "a former garment executive from San Francisco..."

Apparently, US Windpower started the project in the 1970s, started setting up windmills in 1979-1980, and then were later purchased by International Turbine Research in 1992.  ITR still owns the windmills.

Reader RosemaryM followed yet a 3rd path.  Her method was to first look for a database with this information in it.  That’s a smart move.

She did a query for:

Finding  http://www.thewindpower.net/ which has a great collection of datasets about windpower.

The one that's relevant to us is California:   http://www.thewindpower.net/zones_en_4_california.php 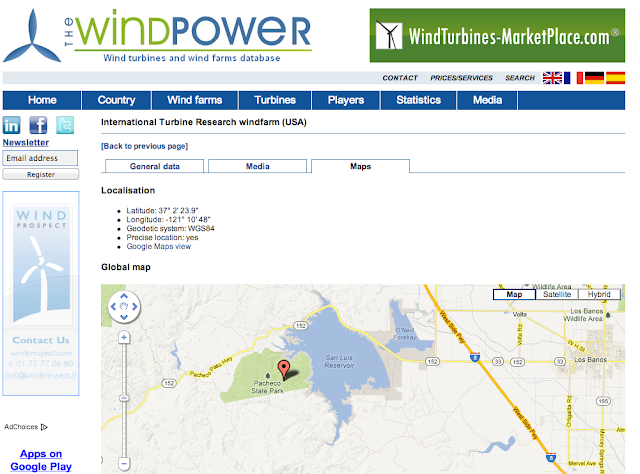 Going to their home page:  http://itrinc.net/origins.html reveals that they started up in 1986.  (But see above for the rest of the story about US Windpower.)

Once you know it’s in Pacheco Pass State Park, finding the name of the rancho isn’t that hard.

Rancho San Luis Gonzaga was a 48,821-acre (197.57 km^2) Mexican land grant in the Diablo Range, in present day Santa Clara County and Merced County, California given in 1843 by Governor Manuel Micheltorena to Juan Perez Pacheco and José Maria Mejía, both Californios.  Three days after the grant, Mejía gave his half to Pacheco.  (So something was going on here!)

The park was created from Rancho San Luis Gonzaga in 1997, five years after it was bequeathed to the state by Paula M. Fatjo. She was the great-great granddaughter of Mexican ranchero Francisco Pacheco, for whom both the park and the nearby Pacheco Pass are named. The rancho had been in the Pacheco family since 1843. The majority of her property was condemned by the state of California in 1962 to create the San Luis Reservoir.

And, as regular reader CMoore points out:  "Interestingly, according to Pacheco State Park General Plan and EIR, the ITR Facility was not the first "wind-powered" installation at Pacheco State Park/Rancho San Luis Gonzaga; during the Rancho San Luis Gonzaga's time as a working ranch a windmill was located on the property and the ruins of that windmill, built in the mid-to-late 19th century, were identified as a historic/cultural resource."

There are many lessons here, but the most obvious one is this--there are often many ways to skin a cat, or find the ownership of a wind turbine farm.

Also, as you see, sometimes one needs to dig a bit more deeply into the backstory to figure out what really happened.  Yes, ITR owns the turbines now, but there's probably a fascinating story about what happened to US Windpower during the 1980s and early 1990s.  But that's for another day.