When to use "Translated foreign pages"?

RamonG writes in with a great question:


I have some questions about How to do queries.

I noticed that you used "Kriegsgefangene in a..." you did not use "german" before Kriegsgefangene to narrow even more the query. That is because of the term of art? and because it is already in german?

After reading your answer. I tried [german prisoners of war america] and then used translated foreign pages in german. Results of your query are much better than my query.

My question is: When is useful to use Translated foreign pages?

It's good to realize that what Translate foreign pages does is to first translate your query into a number of languages, and then search for THAT query.  For instance, "Prisoner of War" is first translated into Kriegsgefangene (German), prigioniero di guerra (Italian), prisionero de guerra (Spanish) etc. and then a search is run for that term (or phrase).

In essence, what Google is doing is searching for your phrase in all of Google's languages simultaneously, and then reporting back on the ones that have a decent number of hits.

Let's look at a slightly different example--let's search for the phrase "host of angels" in other languages.  (In English, this is a reference to a group of angels.  Think of "host" as a mass noun for angels.  Whales come in groups called "pods," angels come in "hosts.") 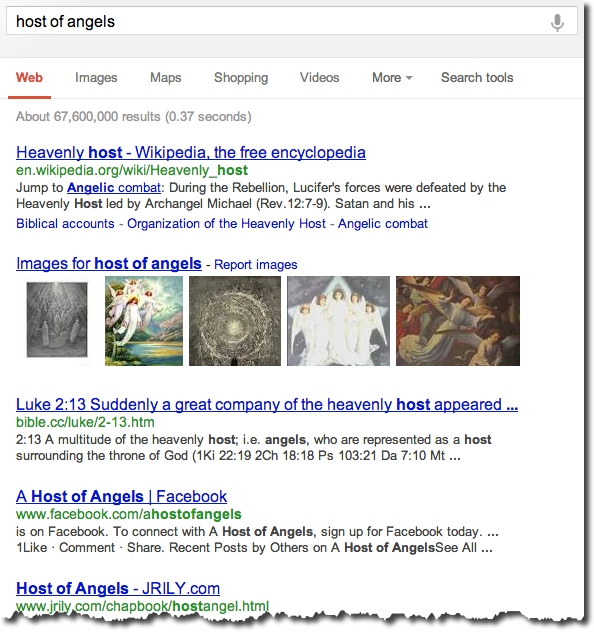 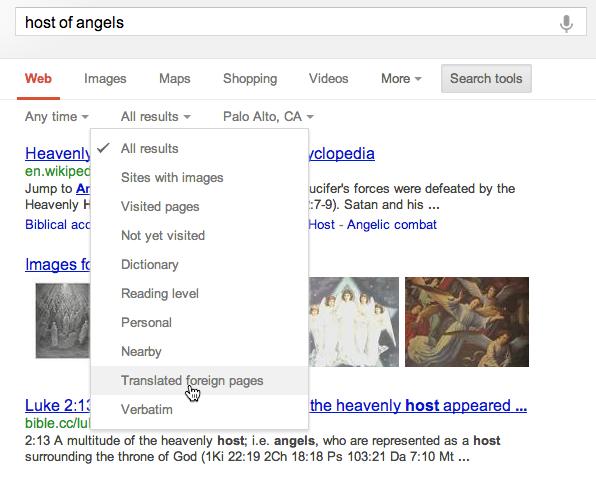 This then gives a whole new set of results, ones that have been found in each of the top four languages for this query (in this case, the FIGS languages--French, Italian, German, Spanish).

What's happened is that "host of angels" has been translated into German, Spanish, Italian and French, then the search is done in each of those languages, and the results returned.

Note that Google only returns a few languages.  Your language can be added into this search set as well by clicking on the "Add language" option. (See below.) 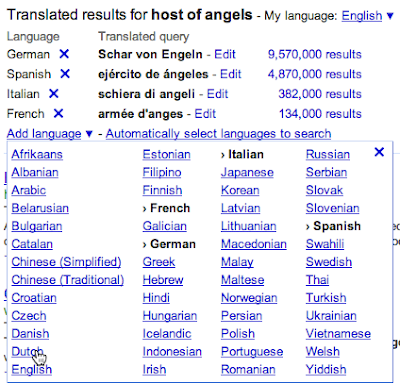 In this case, I'm going to select Dutch, just to see what we find... 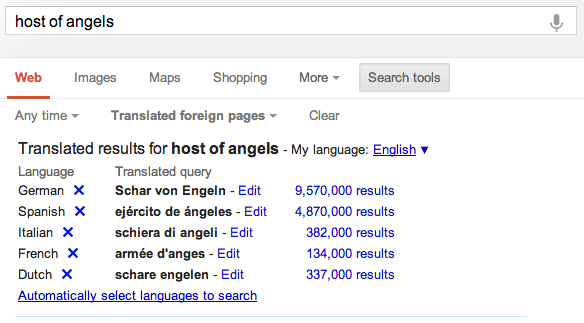 And, as you can see, there are a lot of results in Dutch for the translated phrase "schare engelen" (host of angels).

This works reasonably well because the idea of a "host" as a mass noun is shared in the IndoEuropean languages.  (I have no idea how well this works in Japanese or Chinese -- if any readers can run this search and then comment on the quality of the results in an Asian language, please let me know how well it worked out!)

Now, to get back to Ramon's question....

I used the word Kriegsgefangene because I knew that this word would appear in German texts AND I wasn't confident that the English phrase "Prisoner of War" would translate correctly into German.  Would it translate as 3 words or as one?  Knowing a little bit about German, I was betting, correctly as it turns out, that it would be just one word.

In short, I would use "Translated foreign pages" when I had some confidence that what I was looking for would survive the translation into the target language.

For another example, think about the Spanish verb compaginar.  There is no real equivalent in English (it means "to coordinate schedules").  One might say "reconcile calendars" or a variety of other things in English, but this is one thing to be aware of--does the idea you're searching for exist in the target language?  And if so, how is it expressed?

Another easy example:  there is no equivalent concept of tutear in English.  (It means to address in the informal voice, or “tú.”)  Since English doesn't have the equivalent of “tú” it's not clear what searching for ¿Tutear o no? yields only Spanish language results.

There isn't a simple answer to Ramon's question, but I hope this gives you some guidance!