As often happens, this turned into somewhat more of a quest than I'd thought.  Excellent work, SearchResearchers!

In writing this answer up, I've drawn heavily from Miguel's answer in yesterday's comments.  (Thanks, Miguel.  I hadn't planned on you writing in your own answer!)  I've taken most of what he wrote and edited in a few of my own comments.

My first search was [ europe tea plantations ] - very close to what Ramón, Debbie and Anne, and probably all others did. So I quickly landed on the Inntravel blog.

{ Dan:  This is how I started too, looked around for a bit, then did [ worldwide tea plantations ] for comparison.  It showed me a few more tea growing locations. }

When, later on, I submitted a comment, I didn't realize they were a commercial company nor I was thinking to present this as a challenge, yet. I might not have written that comment otherwise. Anyway, it didn't help that much, apparently. And no one from the company thanked me…
{ Dan: I was somewhat surprised to find Miguel's comment on the InnTravel site as well... but I figured it was him leaving a clue! }

I am a list maniac and I know there are tons of other people like me out there, ready to make lists out of anything. { Dan: This is deeply, deeply true. I'll write about the presence of lists next week... } So once I found the Dagomys and Tregothnan (and I already knew about Gorrana), I figured out that if there was a thorough list of tea plantations in Europe, those three names would have to be there.

So my next search was a simple [ dagomys | dagomis | krasnodar gorreana tregothnan ].

{Dan:  Here, Miguel is using the | (aka "pipe" operator) instead of "OR" -- it means the same thing. FWIW, I would have done this search as [ tea dagomys OR dagomis OR krasnodar OR gorreana OR tregothnan ] which gives a somewhat broader set of results.  The SERP always includes the word "tea" on the results. }

Turns out the only two pages showing up are the best I could get: a list (in Romanian) and a map (title in French). It helps that I can read Romance languages (that is, those two plus Spanish, Italian and Portuguese). I don't know any Romanian but I can derive some because of its similarity with these others on the same branch.

Anyway, I used Google Translate to help me understanding that "Ceaiurile din Intreaga Lume" means "Teas of the (Entire) World". Later on, I would use the available Website Translator plugin to get the full http://www.dagomystea.ru translated into English.
The harder question is determining which tea plantation is the northernmost. It's clear that Tregothnan is at higher latitude than Dagomys. Further north there's Eden Project but I wouldn't call that a tea plantation (check http://www.edenproject.com/visit-us/whats-here/plant-a-z/tea ). Pembrokeshire, in Wales (or, more precisely, the Preseli Hills, as remmij found out) is, according to the map guys, not ready yet.  Remmij's news story is from 2009; but follow the link on the map and tada! they're selling tea that they make.  Then again, what do they mean by "blended by hand"?

Here's what you can read on the "About" page: "Hand blended in Pembrokeshire using imported and locally grown ingredients." Wait a minute! I bet that those "local ingredients" are dried lemon, rose petals, Bergamot orange oil and so on. No tea, probably. From the map's marker description: "At present we’re in set-up stage with an aim for us to be 100% locally grown by 2015. Beyond this we have a target of 2019 to have our tea gardens matured and able to offer a full range of single estate teas from Pembrokeshire."

Are there any other tea plantations and factories in Europe? Answer:  Yes, in Cornwall (England, UK), Switzerland, Italy, as you've found out, but also in France, Georgia and Turkey.What about North America? Didn't double-check all the plantations featured on the map but the general answer is undoubtedly yes. Can I have a list? Yes, someone in the Tea and Coffee Shop "Ethiopia" (in Chișinău, capital of Moldova, whose main language is Romanian) is extremely diligent or resourceful, having written this extensive list:http://www.ethiopiamd.com/World.htmlOr better yet, a map of tea plantations around the world? Well, some other list maniac has created and has been updating this world map of tea plantations for the past 6 years. 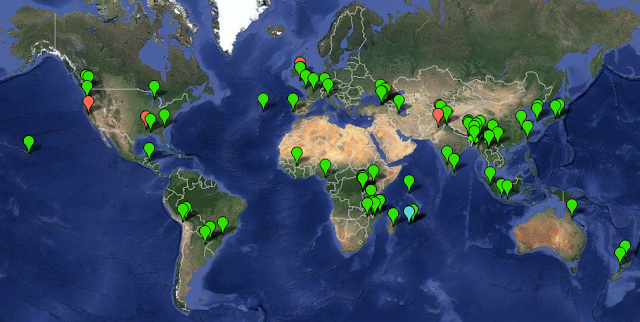 { Dan:  This brings up the question about the southernmost tea plantations!  What about those places in New Zealand?? }


{  Dan:  I looked at the other high latitude tea plantations.  The only one that's close to Tregothnan is the one in British Columbia.  But the lat/longs for each are:

Waikoto, NZ is at: -37.621, 175.06}
Under what name(s) is that Russian tea marketed? Дагомысчай (Dagomyschay) is the company (the group, to be precise),Краснодарский чай (Krasnodarskiy Chay) is the brand, as you can see on all the products. Krasnodarskiy means "from Krasnodar." Dagomys is the name of a district 12 km from Sochi center; Sochi, the town, lies in the Krasnodar Krai (region, administrative division).What is their website's url? www.dagomystea.ruIn the meantime, Debbie and Anne have also found another tea company in the greater Sochi region: Matsesta!

{Dan: They found this by doing a query for [ tea production Krasnodar ], that's the name of the region area of Russia where Sochi is located. With that query they found the name of the company Matsesta and found that the tea is sold under the name "Macesta." }

This means the last two questions were wrongly put. They also claim that "The tea grown around Sochi is grown by about 6 different companies"!
I thought this would be easier for everybody than it showed to be but it turns out that I was kind of lucky on my search.Now here's a bonus: I found a map of Europe showing how the word "tea" is rendered in each local language, colored by etymology. Turns out there's only "te", "chay", "herba thea" and our very Portuguese "chá", without the final Y, because it was imported directly from the Cantonese, without having been corrupted by Persian in between.

I went to graduate school in Rochester, NY, not far from this spot. It's a beautiful place--kinda snowy in the wintertime--but I never would have guessed it to be a future tea plantation.  Just goes to show how the most unexpected things can turn up! }

This was a fun challenge.  My mental model of tea was Java and tropical places--I certainly didn't expect tea as far north as Cornwall or British Columbia!

Thanks again, Miguel!  I think we learned a good deal from this including the power of searching in other languages, the utility of searching for lists, the usefulness of maps, and the value of taking multiple approaches in your searches.  (And, non-trivially, the value of having many people work on a single problem.  One of the outstanding properties of SearchResearch is that all of us working together on this find out things that no one of us would discover on their own.  Truly, this is a fantastic demonstration of the value of diversity.)

(And muito obrigado to Miguel!)

Remember, if other folks have challenges they think would be good for the crew, send them to me directly via email.  (You should be able to figure out my email by now!)