Popocatépetl Resurgent: How do you know when you’re done with your search? 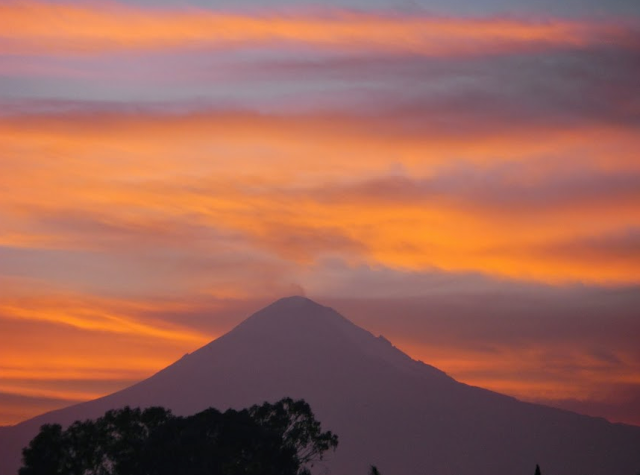 As we saw in the discussion about Popocatépetl and the lahars, the basic question is pretty simple to say:  “Did an outflow from the volcano ever reach the base of the pyramid in Cholula?”

We found some credible sources that told us that the lahars reached the base of the Great Pyramid.  But then Ramón discovered the work of  Patricia Plunket.

The idea of the lahars reaching the base of the pyramid seems to originate with the paper:

In this paper, the authors argue that a large eruption flooded the area around the Great Pyramid on Cholula with lahar outflows.  (Remember that lahars are rivers of superhot mud, rocks, and generally nasty stuff that can travel up to 50 miles from the original volcano at speeds of up to 90 mph.

If you look at Figure 1 from their paper, it's clear they think the Pyramid was hit by the lahars: 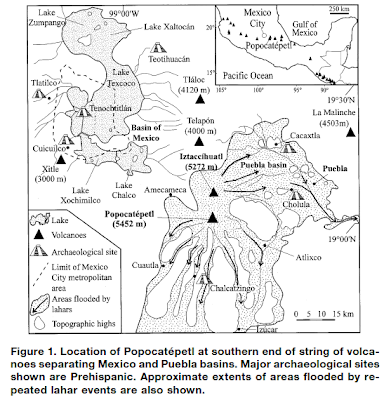 As the authors write:

"Our investigations indicate that a major cataclysmic eruption occurred at Popocatépetl at about this time, affecting a minimum area of  3000 km^2. In addition to the volcanic hazards associated with the base surges, pumice falls, and ash flows, widespread volcanic mudflows reached the base of the great pyramid of Cholula (Figs. 1 and 3). The sequence of volcanic mudflow deposits is several metres thick and contains abundant pumice, pottery shards, obsidian artifacts, and carbon. Carbon from this sequence at Cholula yielded an age of A.D. 790  (+/- 175)."

But it’s interesting to note that the text used to describe the 822 AD lahars reaching the foot of the Great Pyramid in Cholula is exactly the same each time (suggesting that the text was simply copied from paper to paper without any newer data).

Then there is additional work that agrees with this that we’ve already found.

http://volcano.oregonstate.edu/vwdocs/volc_images/north_america/mexico/popos_potential.html   Written by Michael Abrams, Volcanologist, NASA/Jet Propulsion Laboratory, Pasadena, CA.  But writing on the Oregon State “Volcano World” web site, Department of Geosciences at Oregon State University.  Abrams is a co-author on a paper about Popo that was written by M. Sheridan (who is at SUNY Buffalo, NY).

The downside of this web document is that it’s just a note, not an official publication.  There are no references, etc.  But it seems reasonably believable.  As we see, the author comes from a credible institution and has good credentials in this area.

ON THE OTHER HAND…

Fred wrote in with an intriguing comment in the stream:

Google Search [ Popocatepetl caldera formed ] and find a book "Geology of México: Celebrating the Centenary of the Geological Society of México" pp 199-201 Page 201 has a great timeline/stratigraphic image of past eruptions.

The Google Quick Scroll extension leads me to this passage: "NOTE: Beginning in 1993, scientific studies find that volcanic activity has produced several eruptions, two of which were the most violent. The first was, ''at the beginning of the present era'' or first century A.D. The second was, ''between A.D. 700 and 850.'' (Plunket & Urunuela 1998)."

I repeated Fred’s search for [ Plunket & Urunuela 1998 ] and found the PDF for the paper.

Plunket, P., and G. Uruñuela. "Mountain of sustenance, mountain of destruction: The prehispanic experience with Popocatépetl volcano." Journal of Volcanology and Geothermal Research 170.1 (2008): 111-120.

This paper talks about the artifacts and radiocarbon dating of artifacts found at the site suggesting they were covered sometime between 700-900AD.

But one of the key points made in this paper is that:

“...a zone that should show the presence of these deposits if indeed they reached the Pyramid – to date have failed to find stratigraphic evidence of these lahars (López et al., 2002a,b; Plunket and Uruñuela, 2002b, 2005a,b).”

Later in that paper, the authors write:

“Excavations on the campus of the Universidad de las Américas to the east of the Great Pyramid have demonstrated that, in areas where stratigraphy is intact, lahar deposits are also absent although a sterile layer of sandy volcanic ash consistently seals the black clay deposits of the Classic period; cultural materials overlying this layer belong to the Early Postclassic (Plunket and Uruñuela, 2005b, p.103)."

SO… What have we found here?

We’ve found that the story isn’t quite as cut and dried as I thought.

The Siebe crowd believes that the evidence is quite clear that the lahar flow of ca. 800 AD reached the based of the Great Pyramid.  The Plunket crowd disagrees.

We are in the middle of an old-fashioned scientific disagreement, with evidence being mounted on both sides.

I’ve spent about 8 hours quite happily reading through the literature of volcanoes and archaeology in the area of Puebla and Colula.  It’s been hugely fun, but in the end, both groups are arguing about whether or not the lahars made it all the way to the Pyramid or not.

A big problem for the Plunket argument is the some of the basic work is not generally available.  Here’s a citation that’s given:

Well.. THAT’s hard to check out!

On the other hand, most of that paper seems to be covered in a later publication (which is pretty typical of scientific papers) in:

And so it goes, back and forth.  Plunket (an archaeologist) disagrees with Siebe’s (the geologist) interpretation of what’s seen at the pyramid site.  Is it a mud flow from the volcano?  Or just the melting of adobe bricks over the years down onto the plain?

I don’t think we’re going to be able to figure this out by just web searches.  This is really a case where we now understand that there is evidence for, and evidence against.  We could read through all of the literature and make a reasoned guess at the evidence, but that’s the job of a geology (or archaeology) graduate student.

Note that this kind of conversation happens ALL the time in the Talk pages of Wikipedia.  You can see this even in something as innocuous as the Wikipedia page on Chocolate.  If you read the “Talk” page for Chocolate,  you’ll see an animated debate about what should go into the article on chocolate, even reaching into politically charged topics such as child slavery!

And, of course, this kind of open debate about evidence and conclusions is just the normal operation of science.  Even in fields where the “standard interpretation” would seem to be fairly stable, new interpretations arise, sometimes by people from outside of the field.  See, for instance, Nathan Myhrvold’s critique of growth rate data in dinosaurs in which he questions the well-accepted data and analysis of how quickly dinosaurs grew.  (NY Times article)  and his own publication site,  which reprints an article he authored in PLOS One (a fairly respected online with peer reviewed articles, but are not excluded on the basis of lack of perceived importance or adherence to a scientific field).

And of course we should note that some “discoveries” aren’t QUITE that… See the article about the re-discovery of the anterolateral-ligament (ALL) for a discussion about how the ALL was “re-discovered” (but really wasn’t).

FWIW, I first saw this in the NYTimes Magazine (“A team of Belgian doctors recently confirmed the existence of a new ligament in the human knee…”)  12/8/13, and when I checked on it, the story had pretty clearly been blown up out of proportion.

Search lesson:  Overall, then, the key search lesson from our Popo adventure is that it’s well worth looking around a bit more after finding your initial result. Discoveries are often not what you think when they're first noted.  Subsequent articles frequently update recieved knowledge.  Hint:  Look for variations in the answers; and sometimes, just sometimes, you stumble into a very fun debate.  And we realize once more that not all of science and history is quite as locked-down we'd thought.  Sometimes you really have to go beyond just a simple lookups of facts.

MANY THANKS to the SearchResearchers who pointed out the alternative interpretations of the "lahar" flows around the Great Pyramid in Cholula.  Special shout-out to Ramón and Fred, who went the extra mile to contact the authors of some of these reports and dig more deeply into the topic.