Answer: Who are these mythic characters...

Remember that our challenge was to figure out who and why for these pix.

1.  Figure out who/what these photographs depict.  In particular, are they depicting real people, or just characters from the legendary past?  In either case, who are these people?

The ideal answer to this Challenge would tell us:
(1) Who is the sculpture is depicting?
(2) Where the sculpture + building is located?
(3) If you can, what's the story here?  This is a lot of work--what's being commemorated?

For Supreme Extra Credit, can you figure out who were the models for (a) the young girl in the center of the second picture, and (b) the rather ferocious looking fellow in the first?

Answer:  Google Image search will take care of these two problems.
For the ferocious-looking fellow, there's an image that tells us it's the Turks Head Building Providence, Rhode Island. Then doing the obvious query,

Tells us a lot about the building itself.  The Wikipedia article tells us that the 16-story building, constructed of white brick with granite and limestone trimmings, is featured by a massive Turk's head in the center of the curved façade, reminiscent of the wooden effigy of an Ottoman warrior that formerly adorned Whitman's corner.
There are a great many ways to go next to double-check on the Wikipedia content.  A nice way to get local information of this kind is to search in the local newspaper(s).  In this case, the local rag is the Providence Journal.  (That's easy to look up, or you could note the link at the bottom of the Wikipedia article to the newspaper.)
[ "Turks Head" Providence Journal]
While the newspaper has a couple of articles on the building, I found that Brown.edu (the local university) has an article about the building, written up by an architecture group there.  This confirms the basic story, and provides a LOT of detail about the design and mechanical structure of the building.
Of course, another way to get this kind of historical background is to look for a book that covers the history of the city.  Visiting Google Books with the query:

leads to a couple of books.  Providence (by MacGown, 2006) has a pair of lovely images of the Turk's Head building, one from the "original" building (around 1850) and one from 1913 of the "new" building (which looks much like the photo above).

Here's the photo from the Providence book:

It's a nice picture, but I wondered if I could find another version of it. So I screenshot this image and did another search-by-image.  I was able to find a lovely, hi-res version of this image that's from a scanned postcard.  (Photo postcards were quite the thing in the early 20th century.)  Here's a small section of that photo from the left side of the card, zoomed in and cleaned-up a bit. 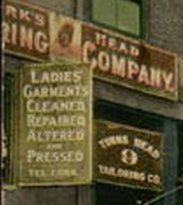 It's pretty convincing that this was an early Turk's Head building.

But as Rosemary pointed out, if you look deeper into the list of Books, you can find the “Publications of the Rhode Island Historical Society, Volume 5” which can’t be viewed but the collection is available in the Internet Archives  Beginning on page 216, there's a long history of that site (who built what, and when), along with the story of the Turk's Head, which is long and somewhat disputed.  But it seems to have started as a ship's figurehead, and called (variously) the Sultan, Mustafa, or the Turk's Head, possibly as early as 1763.  The book goes on to say: 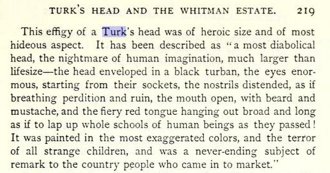 When the "new" building was constructed in 1913, the architect naturally included a version of the head on the ship-like prow of the new building.

For the second image...  a simple Google Image search gives us this response: 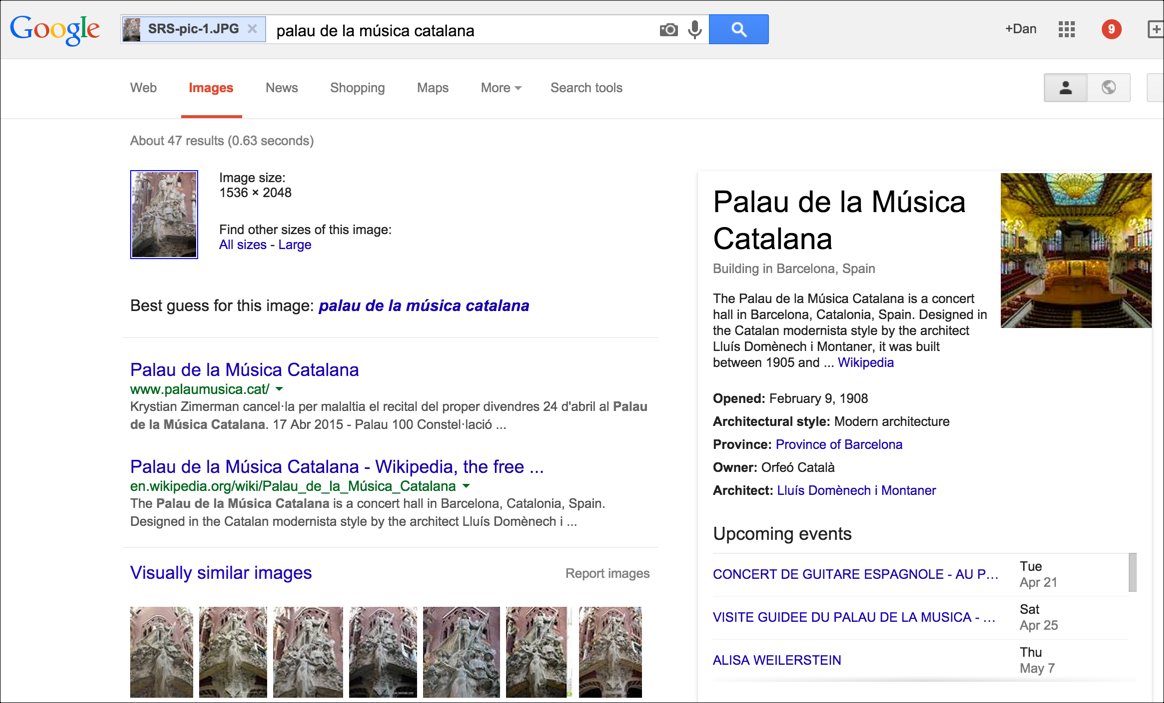 I'm obviously not the first person to take this picture.

tells us (from multiple sources) that the building's architect was Lluís Domènech i Montaner. The large sculpture on the corner is by Miquel Blay, and is entitled La cançó popular catalana (1909).

Catalan song is personified as a graceful maid before a group of male and female figures. Above them is a copy of a silver statuette of St. George in the Palau de la Generalitat de Catalunya chapel.
Now, can we figure out who the model was?

In short... I wasn't able to do so.  After many attempts querying for "model" and reading about the life of Miguel Blay (aka Miquel Blay in Catalan, and full name: Miguel Blay y Fàbregas), and even trying queries like:

I struck out.  (With this query I was hoping to find a biography of his life, possibly with a chapter describing the time he was working on the Palau sculpture.  But no such luck.  If any of the SRS Regular Readers of Spanish happen to figure this one out, let me know!)

I even checked out images of all of the Blay's sculptures, hoping to find a common thread among the young women in his statues, but that failed as well--he seems to have either used multiple models, or he has an extraordinary inventive capacity.


Search lessons:  The foremost lesson is obvious--sometimes searches fail.  I wasn't able to figure out the model for the Palau sculpture, even though I spent a couple of (happy!) hours searching for it.  I'm reluctant to invest much more time because there's no evidence that he had a consistent female model for his works, or that he had a particular person in mind (as opposed to the generic "personification of music" that we found).

For the Turk's Head building, the lesson here was that sometimes digging deeply into the Books actually pays off handsomely.  I wasn't able to find the Historical Society texts using just regular web search--the books content is buried a bit too deeply for that.

Plus, looking up the text on the Internet Archive was a stroke of genius.

Lots of stuff is out there, if only you keep looking, and bear in mind that sometimes you have to go to the door and open it up to see what's inside.