Answer: What's the story with the star?


This is our mission...
To figure out the story lurking behind the star window at the main entrance to the old Spanish Mission at Carmel.  Here's a picture to get you started... 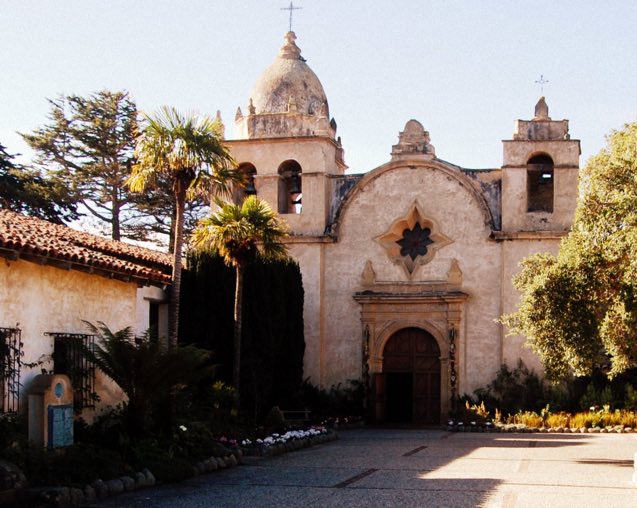 I was wondering about that prominent star-shaped window over the arched doorway.  It's pretty clearly a colonial-era Spanish design element, but I'm not sure I've seen it at any other of the Missions in California.

My questions for this week were...

1.  What is the story with that unusual star over the doorway at Mission Carmel?
2.  Does any other Californian Mission have a star window like that?
3.  Where did that particular star shape come from?  Can you find any other examples of stars in this shape in architecture elsewhere in the world?

The SearchResearch Regulars dug into the Challenge and did a remarkable job.

I started with the same search Ramón did:

and found the results pretty interesting: 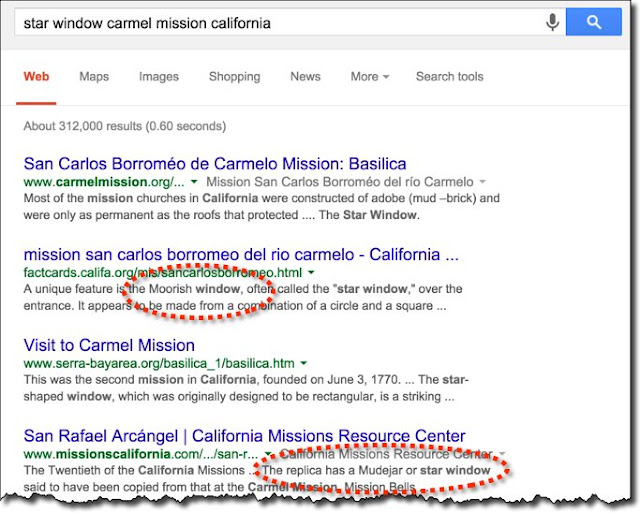 Which every just calls "The Carmel Mission."

But note the two texts that I've circled.  The first tells me that there's a "Moorish" architectural element here (that I hadn't thought about before), and the second ellipse tell me that "..the replica has a Mudejar or star window..."

I read both of those pages, and sure enough, I see that this entire mission was designed by Manuel Ruíz, a master mason from Mexico City, who apparently also designed the Royal Chapel in Monterey (which is nearby, but is NOT the same as the village of Carmel).  Ruíz is said to have incorporated Moorish elements into the plan, such as the domes, and the Moorish window, often called the "star window," over the entrance.

But as the second reference suggests, this kind of window is also called a Mudejar.

teaches us that "...Mudéjar also denotes a style of Iberian architecture and decoration, particularly of Aragon and Castile strongly influenced by Moorish taste and workmanship."  The Mudejares were Muslims who lived in Spain after the 1200’s.

An image search for:

shows lots of versions of the star at different locations in Spain (including two signs along the Autovía Mudéjar):

As that 4th result above suggests, another search for:

in Images shows us the star in San Rafael (which is about 100 miles north of Carmel).

Mission San Rafael Arcángel (1817) is one of the last and most northern of the Spanish Missions to be established.  It is unique among all the California Missions in the fact that it was primarily established as a sanitarium to help heal the native population. (It was set up as a healthy place to go because Mission San Francisco de Assisi was so foggy and damp.) 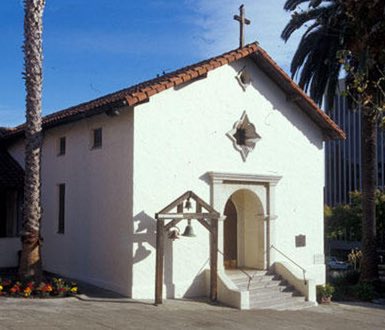 Oddly, when you do a search for San Rafael Arcángel in Google Maps, you see something very different.  Where's the white building with the mudejar star?  When you search for Mission San Rafael, you land here... 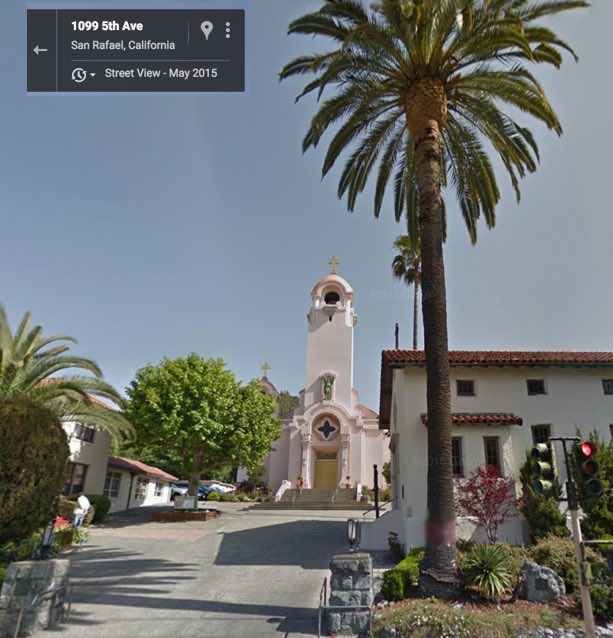 Where is it?  Ah.... With just a little poking around, I found the "mission building" (it's the white building behind the palm tree in the above image). 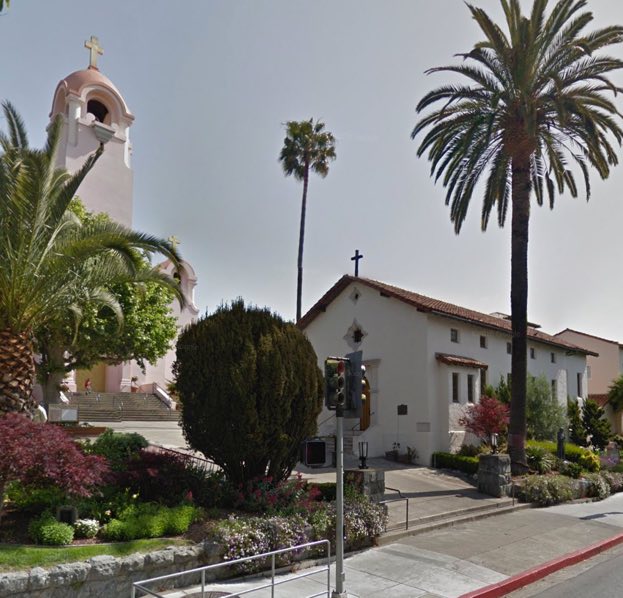 THAT's where the San Rafael Mudejar star is!

But I know that the California Missions all had a difficult time of it.  So a search for:

leads to a number of sites that agree:  the original San Rafael adobe church was built in 1818 but not long afterwards began to disintegrate. San Rafael Arcángel was one of the first missions to be secularized and in 1833, it was turned over to the Mexican government. By 1844, the Mission had been completely abandoned. And somewhere between 1861 to 1870, the ruins of the Mission were completely torn down and replaced by a new parish church.

Today, all traces of the early buildings have been lost and all that is left of the original Mission is a single pear tree from the old Mission's orchard. For this reason, Mission San Rafael Arcángel is known as the "most obliterated of California's missions".

Luckily for us, on December 18, 1949, a replica of the original mission church with a simple doorway under a star window was dedicated.  (I tried to find where this particular design came from, but I haven't yet succeeded.  Is the "replica" really a replica?  Or is it just kinda-like-the original?

From MissionTour.org we learn that in 1878 General Vallejo (the governor of California at the time) approved a Drawing of the Mission done by Vischer.  MissionTour.org says that they found it in the collection of the Historic American Buildings Survey run by the Library of Congress. Here is a poorly digitized 1940 photo of that drawing.

That's an interesting lead.  So I visited the LoC Historic American Buildings Survey site, and did the search for [ Mission San Rafael ].  Here's the Vischer drawing from their collection.  Notice the shape of the window--it's fairly square:

But THIS painting by Renaud dates from before 1835, but how far before is unknown. Here it's Mudejar star-shaped!


If I had to guess, I'd say that Oriana Day was taking a few liberties.  Note that the other two paintings clearly show a two-story church building, while the Day portrait does not.

In any case, there's a Mudejar star in the "replica" building in San Rafael now.

To find other examples of the Mudejar star is fairly straight-forward.  As we saw in the earlier examples from Spain; but naturally, I wanted more.  (Or perhaps, I wanted Moor proof.)

gave me a LOT of example of stellate images from the Alhambra, that quintessentially Moorish palace and fortress complex located in Granada, Andalusia, Spain.

But as I entered the query: 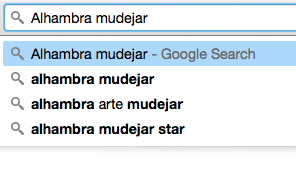 it FINALLY occurred to me that I should search in Spanish for: 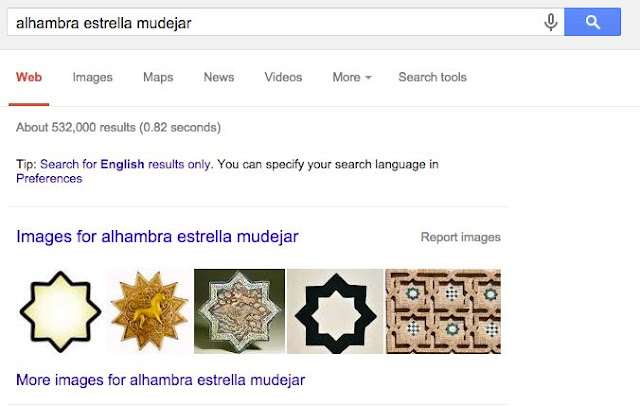 ... which gives us many lovely examples of Mudejar stars/estrellas.

Although I have to admit that my very favorite example, which I found just by browsing through the images, was this beautiful fountain in the Alhambra. 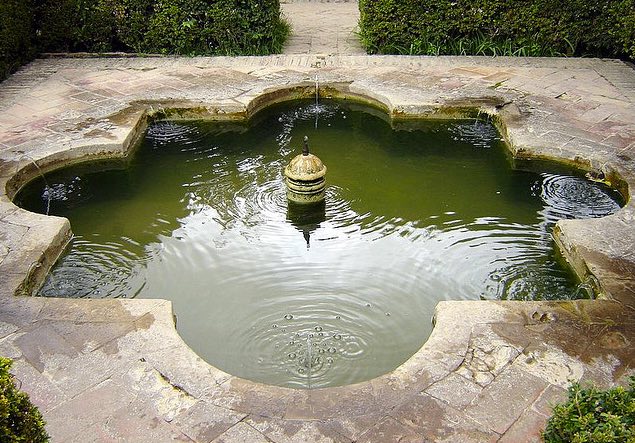 Which pretty neatly connects the "star window" in the San Carlos Borroméo de Carmelo Mission with the Moorish designs of the Alhambra.

Starting from the top, we learned a few things...

1.  You can learn a lot by reading snippets.  But as I've written before, be careful not to overread the snippets.  You can get leads, but follow them up so you understand what's really going on. In this case, we got our first idea that this could be Moorish in origin, and called a "Mudejar star."

2.  Reading results gives you clues.  It was by reading about Mudejar stars that we first found the hint that San Rafael Arcangel might have a star window as well.  Of course, that led us to the historical quandry about whether or not it originally had such a window.  But nevertheless, we found it.

3. Look around in Streetview when you can't find the thing everyone says is there.  In this case, the Mudejar star window wasn't obvious... until you "walked" pegman down the street and looked back.  THEN it was clear where the star was.

4.  When searching for Spanish things, try searching in Spanish!  Obvious in retrospect, I know, but I finally figured it out by....

5.  Notice what autocomplete is trying to tell you.  In this case, one of the autocompletions was in Spanish.  Pay attention.  Read the signs along the way.

What a fun Challenge.  You're right--I thought this would be simpler, but in fact, it was deeper than I'd imagined.

In closing, I have to point you to the excellent podcast about "The Fancy Shape" that Remmij found on the 99% Invisible site, a source of many superb podcasts.  This one podcast is dedicated to the quatrefoil, a 4-leaf-clover design... which, when you add triangles on each leaf, becomes the Mudejar star.  It's well worth a listen.  Hat tip to Remmij for the find.