That was fun!
This past week I was in the western Caribbean, on the island of Bonaire (part of the Netherland Antilles), and I'm seeing a bunch of extremely interesting animals.

Our Challenge this week was pretty simple and fun:  Can you figure out what these are?  I'm looking for (a) common name, (b) Latin binomial name.  (And, if you find one, an interesting factoid or story about each.)
What can you dig up on these?

Answer:  As several of you noted, silly me, I posted the pictures with their file names still attached to the image.  Simply rolling over the image with your mouse will show you the URL-encoded name of the file, which (in this case) had the animal name.... Like this: 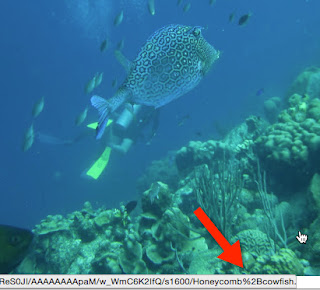 This is the "Honeycomb Cowfish"--which you can just read.  (The extra characters are inserted for "URL-encoding"--%2B stands for a space character in the URL.)

This trick was one I pointed out in one of the very earliest SRS episodes. (From 2010--which means we should be celebrating our 5th year anniversary soon!)

Ramón pointed out that some of these can be found by doing a query like this:

Luis writes:  Blue parrotfish. Scarus coeruleus. From FishBase: "reports of ciguatera poisoning" (meaning: don't eat it; "ciguatera is a foodborne illness caused by eating certain reef fish whose flesh is contaminated with a toxin made by dinoflagellates such as Gambierdiscus toxicus which live in tropical and subtropical waters.")  All results that are relevant point to Florent's Guide To The Florida, Bahamas & Caribbean Reefs, part of Florent's Guide To The Tropical Reefs. 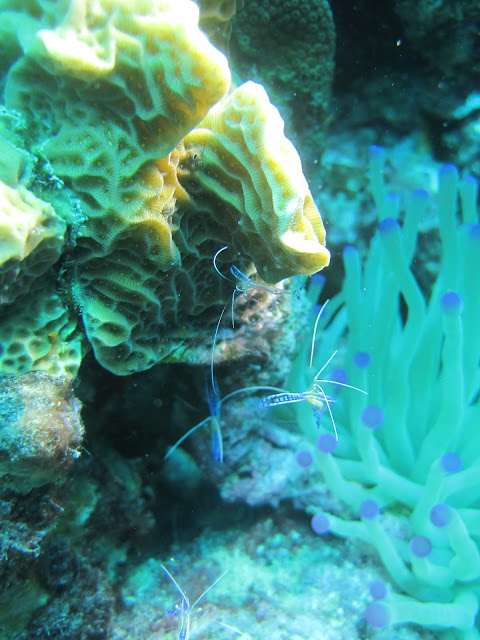 For this image, Luis did a nice Image search:  ("Blue shrimp and anemone") (found initially through an Image Search of an image crop).  This is a Pederson's shrimp (a species of Cleaner shrimp). Ancylomenes pedersoni. From the Marine Species Identification Portal: "lives in association with a variety of sea anemones, Lebrunia danae, Bartholomea lucida, Bartholomea annulata and Condylactis gigantea" (the last one seems to be the anemone on the photo); "When approached carefully with an extended hand, it may come out of its protection to clean it." Nice and funny info on how they clean fish on the Wikipedia article.

Just for grins, here's a picture of one cleaning my finger. I don't know that I have many parasites, but if I did, this shrimp would take of it for me.  This is great for a sense of scale... 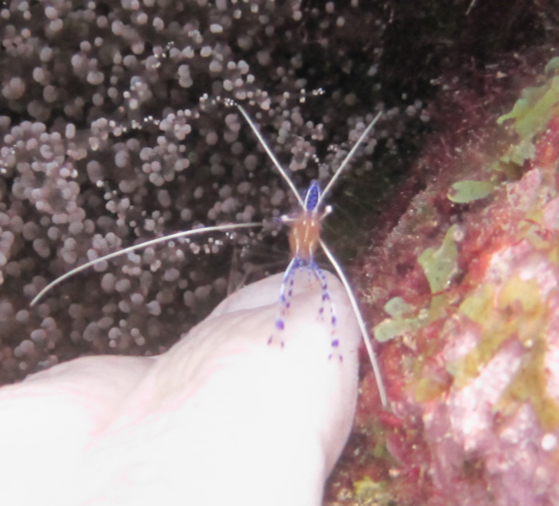 Here, Luis writes:  There are over 10,000 species of bristle worms (aka polychaetes), divided into >80 families. Because "each of the over 80 families living today have characteristic body shapes and chaetal types" (WoRMS), I guess it's safe to say that the species on the photo is a fireworm — ie, belongs to the Amphinomidae family (found similar creatures though Search by Image). I just downsized the sample of electable species to less than 300 (check here and click on "List Species"). One of the most common, and to a layman very similar to the one on the photo, is Hermodice carunculata. Another common one is Eurythoe complanata. Very interesting facts on this Advanced Aquarist article.

And Ramón found a fantastic link to "14 Fun Facts about Bristle Worms" (aka Polyachetes).  Read it if you dare.  (There's an amazing video of the "Bobbit Worm" chopping a Lion Fish in half.  Now THAT's frightening.) 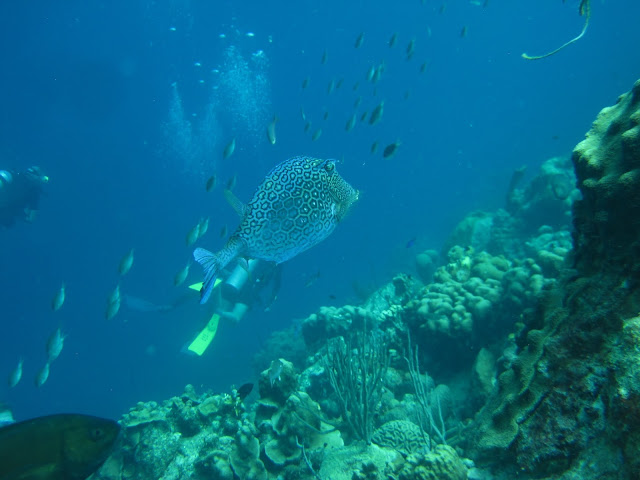 Luis writes here:  Honeycomb cowfish. Acanthostracion polygonius. From FishBase: "Uncommon and wary" (wow, I guess it must have been quite a sight then). From Smithsonian Bocas Database: "Can darken, pale and change colours."

Interestingly, the cowfish is considered an excellent food fish and is often marketed fresh, although I've never seen it on a restaurant menu anywhere in the Caribbean.  There have also been reports of ciguatera poisoning from eating the cowfish. It is taken primarily in traps and occasionally with seines. This species is also a popular fish for display in public aquaria. I found it to be a relatively uncommon fish, not easily approached by divers.

Ramón discovered that "The bodies of Boxfish [of which the cowfish is a type] are covered in a toxic mucus which can be released when stressed." 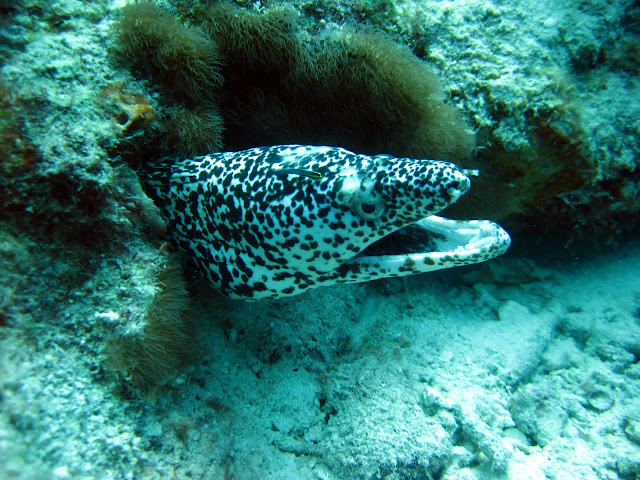 Finally, my friend, the spotted moray.

Luis: Gymnothorax moringa. From FishBase: "Usually seen with its head protruding from a hole and the rest of its body concealed" (just like the picture). "Observed to be unusually aggressive towards man ". "Its bite is very dangerous" (morays' teeth are really impressive).

While Luis is correct (that's the entry in FishBase), I'll tell you from personal experience, that these eels are pretty shy and retiring.  I got pretty close to take this photo.  About 1 second after I shot this, the eel slithered back into the coral head and vanished.  They're NOT particularly aggressive in my experience.

Just for fun, here's another SRS historical moment:  I'd written about moray larvae back in 2011.  Then, it was an Image search problem.  But what's so interesting about them is that morays, in their juvenile, larval form, are VERY different in shape.  Here's a juvenile moray eel.  (I don't know if it's a Spotted Moray or not, but quite possibly.) 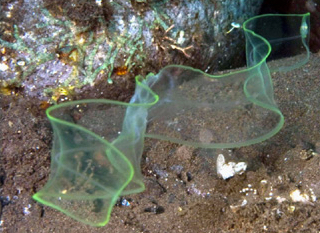 Thanks to everyone who wrote in with answer and comments.  I appreciate all of them!