Answer: Pineapples and radomes in Hawaiʻi?

So here's a quick summary of how I found the answers to last week's Challenges.

1. Driving to the North Shore we passed through fields of pineapples.  Historically, pineapples (and sugar cane) have been the mainstays of Hawaiian agricultural exports. But the pineapple fields seem... small to me.  How many acres of pineapple are planted on Oahu these days? (This might sound similar to last week's Challenge, but no fancy programming needed...)

I started with the query:

and found lots of articles, but as I read them, I realized the numbers were all over the place.  The dates of the articles were from the 1990s up to 2015, with huge variation in the numbers depending on the year.  It's clear I needed to restrict the articles in just the past year. 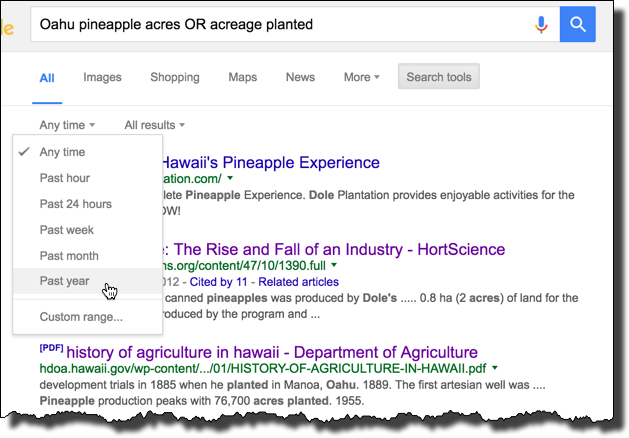 This started giving me more consistent answers:  from the  Maui news – Feb 21, 2016  "Hawaii's once-proud pineapple industry has been reduced to the rank of seventh-largest crop with 4,508 acres (1,094 acres on Maui and 3,414 acres on Oahu). Pineapple production on Lanai ended in 1992. Dole Foods had once farmed as much as 13,000 acres of pineapple on the island [of Lanai]."  And this from the Hawaii Department of Agriculture. (And if you know that around 1,000 acres of pineapple are planted on the Big Island, that leaves around 3,500 acres on Oahu.) 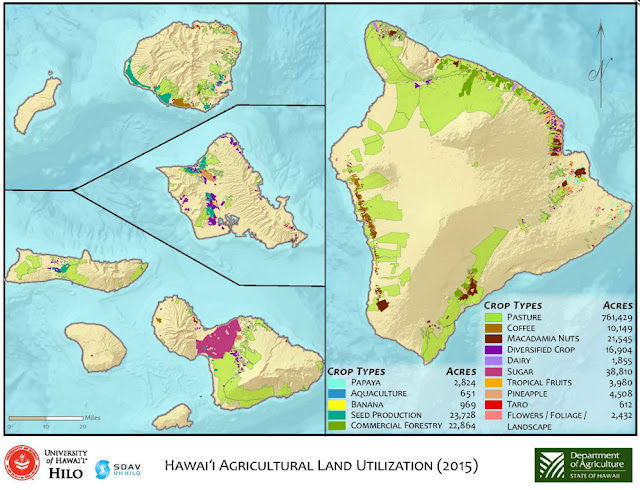 But the big trick here is that these numbers have to be RECENT!  (Which is why filtering to just the past year is important.)

The most-visited tourist attraction in the state of Hawaii is the World War II Valor in the Pacific National Monument (also known as the Pearl Harbor bombing site). The second most visited attraction is the Dole pineapple plantation near the North Shore of Oahu. It’s odd, when you know that 300 billion pineapples are produced worldwide, but only around 400 million come from Hawaii. That’s only 0.13 percent of all the pineapples sold each year in the world.  Once upon a time, Hawaii had lots of land dedicated to pineapple production, but now, pineapple production is primarily for local consumption, just as it was back in the day when James Dole first started commercial pineapple.

As an indication of how rapidly these things change, look at the agricultural map above (from 2015).  See that big band of sugar in the middle of Maui?  That's all gone.  Those 38K acres were the last vestige of sugar production in Hawaii. Alexander & Baldwin (the company that ran the Hawaiian Commercial and Sugar Plantation on Maui) announced that they were discontinuing all sugar operations by the end of 2016.

Big lesson here:  Especially for things that can change rapidly (e.g., economic and agricultural variables), be sure to get the most recent data!


2.  I know there are many different kinds of pineapples, but which variety is the most commonly planted on Oahu?  (Here's my closeup photo of a pineapple from central Oahu. Yeah, it's pretty prickly in there--you don't want a job picking pineapples!)


An easy search for:

leads to an article by the Cooperative Extension Service that tells us that the fresh pineapple you find in your non-Hawaiian supermarket is the MD-2 cultivar, a hybrid developed by the Pineapple Research Institute because it’s sweet, low in acid and not susceptible to browning when refrigerated—a common problem in the Smooth Cayenne, which had been Hawaii’s industry standard variety cultivated since the 1880s.   "In Hawaii, strain selections from field populations of 'Smooth Cayenne' are grown almost exclusively."  (It's called Smooth Cayenne because the leaves are relatively free of the thorns that appear on nearly all varieties of pineapple. For contrast, see the Comosus prozenas above.) 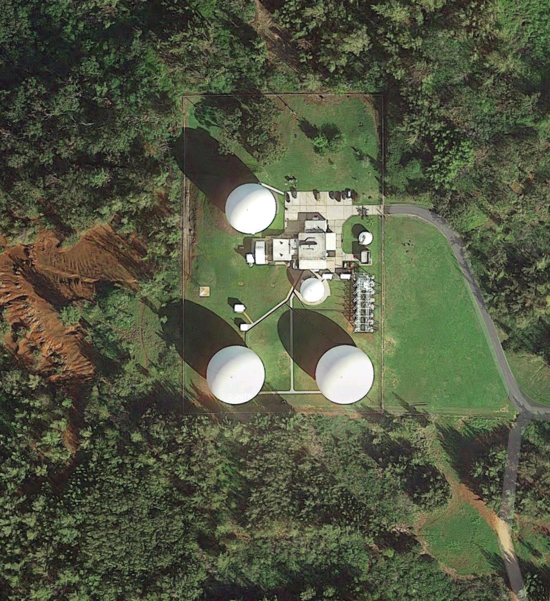 This image is from Google Maps (or Google Earth).  But to figure out what this site is all about, I used two different methods: (1) Wikimapia.org and (2) Google Streetview

If you enter this lat/long into Wikimapia, you get this when you roll-over the box that shows up at this site. 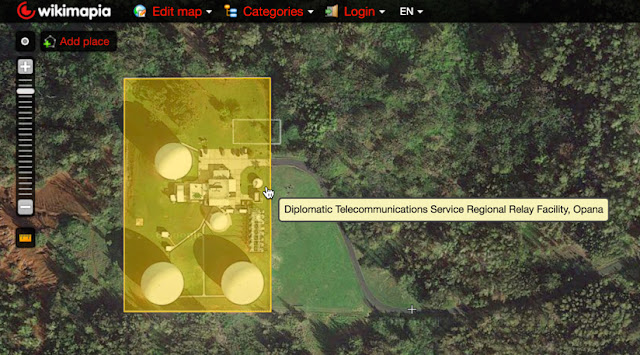 tells us that this set of domes is part of a system of telecommunications networks that supports foreign affairs agencies in Washington, D.C., and U.S. diplomatic missions abroad. It is run by the United States Department of State Diplomatic Telecommunications Service Program Office (DTSPO).

To use Google Streetview, you just follow the road out from the site down to the major connector road in the area (Kamehameha Highway) and take a quick look via Streetview.  There, you'll find this sign at the entrance: 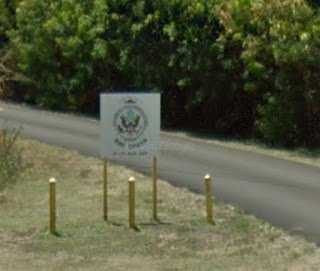 Hmmm.  This sign is a bit blurry.  But what if I Search-By-Image for this?  If I JUST put in the image above, these are my search results: 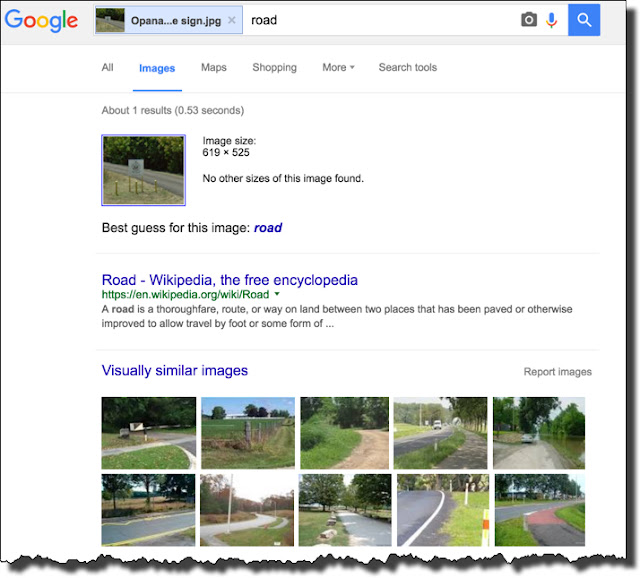 HOWEVER... remember that you can help guide the image search process by adding some information.  In this case, we know that this is at the Opana site, so I'm going to add that as the search term, and look at what I get now: 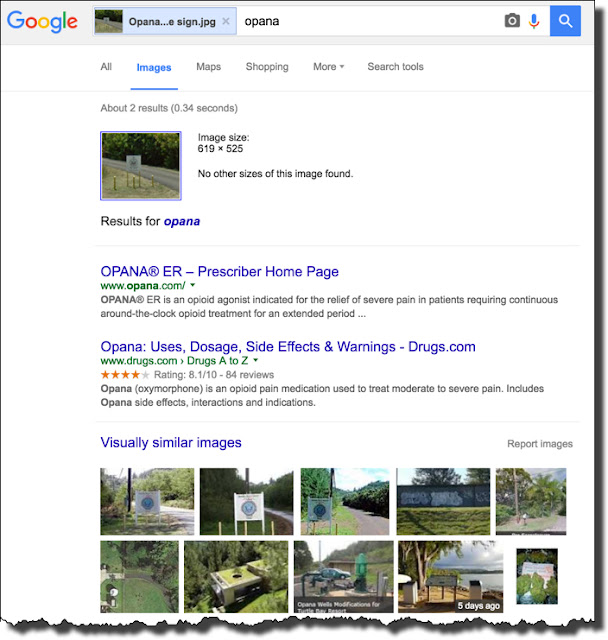 If you ignore the ads, you'll see that the first 3 hits are all exactly what we're looking for--the sign at the entrance to the facility.  The first hit is from Panoramio: 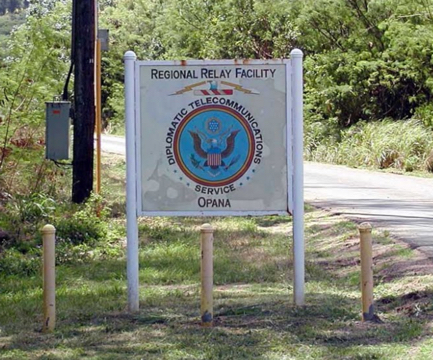 which pretty much confirms what we're looking for in this Challenge.  This really is the Regional Relay Facility for the DTS service.


4.  (Extra credit)  This radome site is clearly very modern, but this isn't the first radar installation near this location.  There was  a historically very famous site near here.  Can you figure out what that radar site was and why it's so famous?

There are several ways to figure this out.  My first attempt was this:

After digging through some off-topic results, I found the Wikipedia page on the history of the Opana radar site, which tells us that:

On Thanksgiving Day in 1941, the Schofield Barracks radar set was moved to the Opana Radar Site, a location 532 feet above sea level with an unobstructed view of the Pacific Ocean. The set comprised four trucks carrying the transmitter, modulator, water cooler, receiver, oscilloscope, operator, generator and antenna.

On December 7, 1941, the Opana Radar Site was manned by Private Joseph L. Lockard and Private George Elliot, who detected approaching aircraft at 7:02 am...

The men reported their findings to the temporary information center at Fort Shafter. The information center staff had gone to breakfast and Lt. Kermit Tyler received the report. Tyler reasoned that the activity was a flight of Army B-17 Flying Fortress bombers, and advised the radar crew not to worry. Tyler told investigators that a friend in the Bomber group advised him that whenever the radio station played Hawaiian music all night, a flight from the mainland was arriving, and using that for navigation homing. Elliot and Lockard continued plotting the incoming planes until 7:40 when contact was lost. Shortly before 8:00 am they headed to Kawailoa for breakfast and only learned about the attack when they arrived. Elliot and Lockard rushed back to Opana and operated the radar until the attack ended."


Although it sounds like a huge error, you can scarcely blame the radar operators or the information center at Fort Shafter.  In those days, the radar images looked like this (this is a reproduction of how their radar image would have appeared): 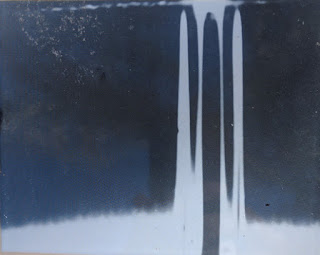 All the radar operators could tell was that there was a big signal out there.  By measuring the time delay, they could tell the distance, the heading, and ground speed.  (This was fairly early radar--it didn't have the sweeping line display that you usually think of for radar.)  It's easy to see how they might have thought this was the incoming flight of US B-17s.

Incidentally, you could have found this same information via Wikimapia as well.  See that other box in the image?  When you roll over that, you'll see: 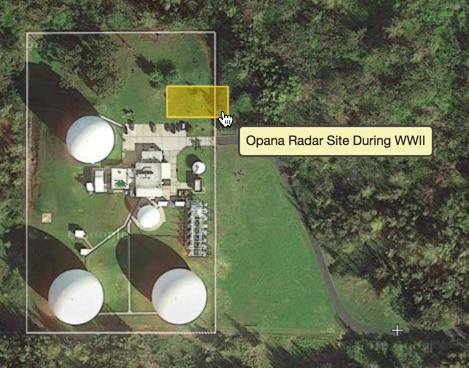 which then leads to additional information from the IEEE about the Opana radar installation in 1943.


As I mentioned above:

1.  Be sure to get the most recent information on your topic.  As we see here, the conditions of agriculture in Hawaii change rapidly, so your research really needs to be current.  For these kinds of research, information that's even 1 year old might be seriously out of date.  (And as we saw from the "barren zone" Challenge, interpretations change over time.  Be sure to check what you find with current data.)


2.  Use Streetview to get additional information by "looking around" as though you were there in person.  You'd be surprised how often you can figure things out just by looking.  Streetview makes this possible!

3.  You can guide Search-By-Image by adding in information to the query.  The ability to add in "context information" to a Search-By-Image is often incredibly powerful.  In this case, we were able to find a high-resolution, in-focus version of the sign we were looking for.  This same trick can be used to find focus in on a search topic when you're getting too many confusing results.  Adding in topic or location information can often get you exactly what you seek.


Hope you enjoyed this Challenge!