Answer: Are these documentaries difficult to find?

Documentary and older films are a 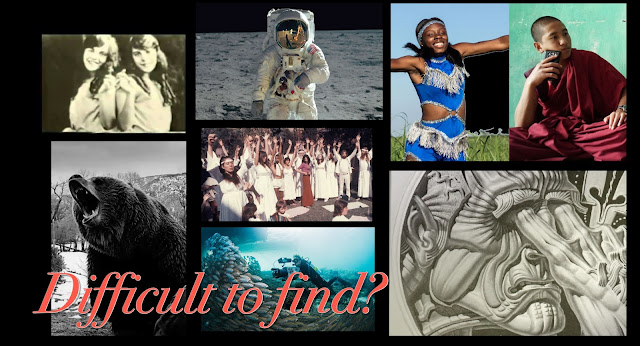 But finding them can be hard.

What are the tips you use for finding older and less common films?  (Or, more specifically, videos of films... although in an era when all movie houses seem to be going digital, I'm not sure what the distinction really is any more.)

Can you find these films so I can watch them online?  Here's the list I'd like to find.

1. Garlic is as Good as Ten Mothers.  I know this is by Les Blank, I know it's from 1980, it's about garlic, and maybe it's about motherhood, but that's all I know.

Much to my surprise, the obvious Google query gives a bunch of results that highlight the film. And if you click on the Videos tab, you'll see:

Notice that little white number in the lower left corner of each video icon?  That's the run time of that particular video.  You can easily see that these are all trailers or shorts for the documentary.

But if you look down the column a bit, you'll see one without any runtime--that's the film (apparently the entire 50 minute film) hosted at U. Wisconsin-Madison with a transcript of what's being said.

And of course, one of the main results leads to the Les Blank site, which then points to the Criterion film site, which hosts (and sells) the film.

Another approach, as pointed out by Ramón, is to check out the JustWatch.com site.  (Be sure to set the country code to your locale.)  JustWatch is a fairly remarkable site that lists LOTS of films and their availability all over the web.  (It's good enough that I often check it whenever I'm looking for a somewhat obscure movie.)

As cmarlowe very correctly points out: "If you have a library card and your library subscribes to Kanopy or you are a student or faculty member a university that subscribes many full-length films are available to watch including Garlic is as Good as Ten Mothers and Metropolis."  That's absolutely correct.  Yet another reason to get a good library card.

Arthur Weiss also commented that "Wikipedia's page gave some suggestions e.g. TCM.com (which requires a VPN if outside the US)..."

Footnote:  The Wikipedia page on the movie has a fascinating quote from a Washington Post article about the movie:  "The director recommends that, when the film is shown, a toaster oven containing several heads of garlic be turned on in the rear of the theater, unbeknownst to the audience, with the intended result that approximately halfway through the showing the entire theater will be filled with the smell of garlic..."

Footnote to the Footnote:  I live not far from Gilroy, where most of the movie was made.  When you drive through Gilroy during garlic harvest time, the scent of garlic is pretty powerful.  It's heady stuff, certainly enough to make a popular documentary!

2. Metropolis.  Not a documentary, but a super famous German expressionist film from 1927.  Can you find it online?

The query [ Metropolis ] brings lots of results--the usual Wikipedia page, along with IMBD and others--but if you click on the Videos tab, you'll find many trailers (look at the white numbers for running times), including one video that shows up as 2:19:14.  That is, 2 hours, 19 minutes, 14 seconds long.  (This video is in fantastic shape; excellent conversion from film to digital.  Note that it has German intertitles.)

An issue with older (and popular) movies is that there might multiple versions of the same film.  Wikipedia points out that Metropolis has been recut many times. 153 minutes (original)

But we were able to find at least one free version.  JustWatch.com shows MANY different versions, most for very small amounts of money.  But since Metropolis is widely regarded as one of the greatest and most influential films ever made, it's probably worth a few bucks to pay for the version you'd like to see.  (Note that Kanopy also has their own version.)

3. The Disappearing Cape Breton Violinist.  My handwriting was shaky on this one, so the title might be a little off.  I'd still like to watch it, though.  Can you find a link to an online video of this?

As everyone noted, my handwriting (and memory!) was more than a little off.  Luckily, Google spell-corrects "the disappearing Cape Breton violinist" to "The Vanishing Cape Breton Fiddler."  When you think of it, that's more than a mere spell correction, it's actually fixing a major memory bug!

It's not hard to find excerpts of the full film, but finding the entire documentary is difficult.  Like many of you, I found where it was made (Canada) and who produced it (Canadian Broadcasting Corporation, CBC).

And, as AlmadenMike notes:

The only clue I found that Arthur did not include in his excellent response was from a comment by Ron MacInnis himself to the YouTube Part1 video that included: "CBC owns the contract [for the documentary] but kindly gave rights to the Celtic Music Interpretive Center in Cape Breton.

Here's a link to the CMIC archives

But while it has online a (partial) list of the books, magazines and publications that the archives contains, there is apparently no similar list for its audio/video collections. And there certainly does not appear to be any free viewing of the MacInnis' documentary via the CMIC site.

And that, my friends, is about as close as we've come to finding it.

I checked all of the usual places (JustWatch.com, YouTube, Vimeo, Hulu, etc.) but wasn't able to find a video of the entire thing.  I found pieces of the whole, but not the film in its entirety.  (A nine-minute part. A seven-minute part. A playlist with six different videos.)

By searching for Ron MacInnis, I was able to find lots of detail about him and a bit about the film.  His LinkedIn profile led me to VanishingFiddler.com, which is long gone. (Here's a link to the Internet Archive capture.)  On that archived page he writes:

"..in 1972,   sorry to see the passing of traditional Scottish music in my native Cape Breton in Canada, I wrote and narrated a CBC network television program that lamented my sadness at its passing."

So we know it exists.

The page promises a downloadable version, but it doesn't seem to have happened (or it's gone away).

I also found a sequel video, The Return of the Vanishing Cape Breton Fiddler... or at least several references to it.  Here's a video by Ron MacInnis talking about the project, and here's a reference to a showing of the video (in 2017).  But I've been unable to find the video itself--even though I know it exists.  (So, naturally, I wrote to MacInnis--if I get a reply, I'll let you know.)

This Challenge was a mix of easy (Metropolis) and very difficult (Cape Breton Fiddler).  A few lessons:

1. Sometimes you can find the entire video, but it might not be obviously labeled as such.  That was the case with the videos of Garlic--the full-length version IS available, you just have to pay attention.

2. Videos vary in quality.. often quite a bit.  We could find versions of Metropolis, but they come in different levels of fidelity and different kinds of edits.  Be aware that you might not quickly find the canonical version.

3. Clues for searching can come from anywhere, including YouTube video comments!  As Arthur noted, clues for additional places to search can come in many forms.  (As always, use hints and clue with caution.  Listen, but verify.)

4. Sometimes a content aggregator is your best bet.  We found the JustWatch.com site to be a useful aggregator of information about videos that come in many forms scattered over many places.  Google Video search is good, but JustWatch adds value to the video search results by pointing to media outlets that aren't scanned by Google.  They also collect a lot of metadata about the film that's incredibly useful.

5. Sometimes you can only find fragments...  That's the case with the Vanishing Cape Breton Fiddler--we found bits, but not the whole.  This search will go onto my queue as "something to watch for" over the next few years.  I hope to find something!