Answer: How to read other scripts and languages?

It can seem magical... 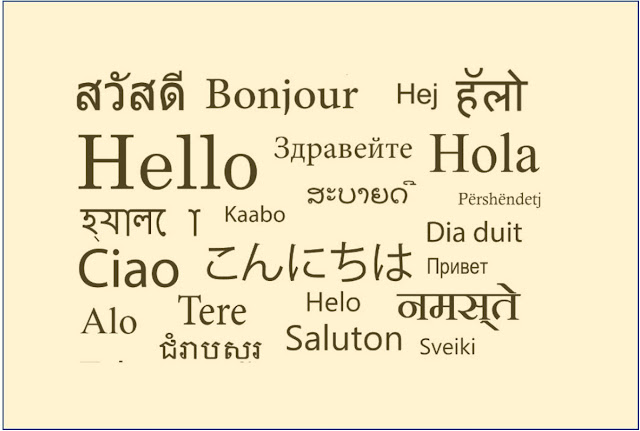 ... when you realize that you have the ability to read another language, especially one that you don't know and in a script that you can't even identify.
But that's what this week's Challenge was all about--a moment of magical realism, learning how to do something that seems impossible.

This is a great chance to talk about how to do exactly that--read in writing systems (what the pros call "orthographies") that you don't recognize.  In some cases (such as Hindi or Arabic), I can't even recognize the letter boundaries.

You have to know that there are around 300 different writing systems worldwide, and that's counting only the current ones.  There are plenty of languages out there without ANY writing system, and plenty of languages-that-once-were that are literally lost in time.  If you're interested in these other scripts and other languages, check out the Script Encoding Initiative at UC Berkeley which includes some writing systems that we still can't read (e.g., Linear A).

1.  For each of these images below: What is the language?  What is the translation of the text? 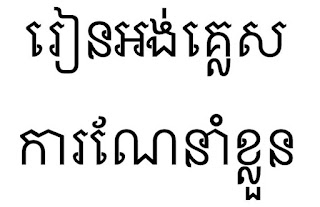 My approach was the same in all cases: use Google Lens.  Notice that there are a couple of ways to do this.

Method 1: You can use your phone to take a picture with the camera and bring up Lens, which includes the Translate function.  (Here's how to do this on your iPhone.)
When I take a picture of image A, this is what I see in my Camera application.

Then I select "Lens" (the circle on the right), which gives me the chance to search for the image, or

And if you wait a moment, it will translate for you (while trying to preserve the color and layout as much as possible).  Thus, the top characters (in the Cambodian script, Khmer) spell out "Learn English Introduction" while the bottom Hebrew characters spell out "Significant discount for soldiers in uniform."

Method 2: Of course, if you're on a computer, you can right click (or Control-click a Mac), which leads to the same result: 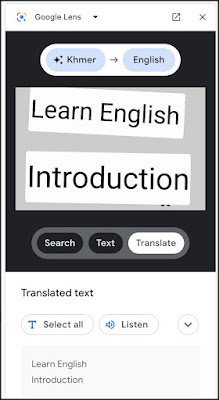 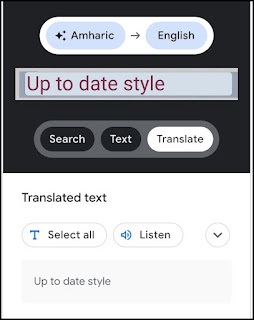 Then... a non-obvious translation, but apparently it's a cautionary sign telling the driver to beware of deep holes created by roadwork.  (Something like the "no shoulder" signs you sometimes see on road construction sites.) 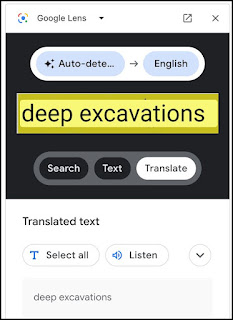 Notice that one of the options is to copy the text in the original orthography.  Clicking on the "Text" button will copy the text for you. 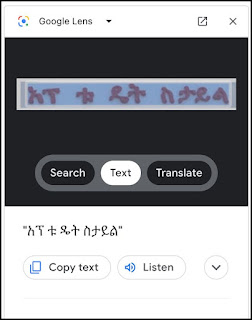 So... the simplest way to figure out the writing system and to do translation is by using Google Lens.  Works for me.  Hope it works for you as well.
SearchResearch Lessons
One of the big takeaways is that not everyone knows all of the tools!  Just out of curiosity, I asked about 20 people (in Silicon Valley, not exactly a random sample), but even here, in the technological heartland, I found that fewer than half of the people I asked knew that there was an image-to-text translator built into your phone.
I guess that's one of the reasons I keep doing SRS... there are still truly valuable lessons to learn and to share.
Keep reading. And Search On!

P.S. Sorry about the missing week.  It's not as interesting as Agatha Christie's 11-day disappearance just a very ordinary case of too many things to do...