Answer: How common are animal-adjectives?

There are many ways to answer this question, and in his comment, Hans goes from [ frequency lists ] to Wiktionary to the Project Gutenberg word count lists.


From the search point-of-view, that's not a bad search, but here's what I did for contrast.


I started by framing the problem in the most obvious way I could think of with the query:
[ word frequency over time ]


Yes, I know the term "frequency" has a notion of time built into it, but I was searching for a web page that would write over the changes "over time" in relative term use.  That's why I included "over time" in the query.  In essence, this is a two-part query:  "word frequency" and the idea of "change over time."  I left out "change" because I thought that would mess up the bigram whereas "over time" would be frequent enough to be useful.


As I sifted through the results, I noticed something I should have thought about straight-away:  the Google NGRAM Viewer project!  This is a marvelous "digital humanities" tool that would give me exactly what I wanted in one convenient package!


In this case, once I'd found the right tool, the problem becomes trivial.  I did a comparison query of  piscine, lupine, vulpine, and bovine to generate the following chart. 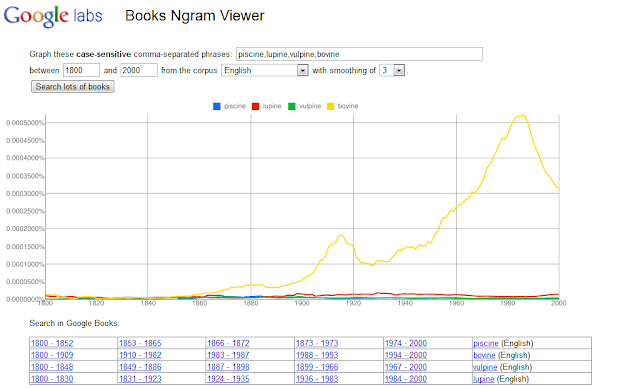 Why so common?  Clicking through on the links at the bottom of the page and comparing hits from the 1900s vs. the 1980s shows why: Agriculture and disease.  The first bump in the 1910s is agricultural.. but then "bovine spongiform encephalopathy" starts the rise to bovine's
current frequency levels. 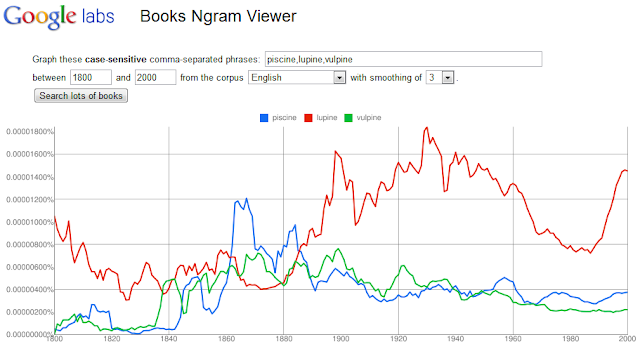 Still... lupine is rare.  But why does it dominate the other two "animal adjectives"?  My best guess from looking at the books in the hit list is that this the period when lupine (the plant) began to be taken as a serious topic of horticulture.


(Among the other things I discovered while writing this post was that "Current Minnesota recommendations are that white lupines are unacceptable for growing pigs (under 225 lbs). A 1988 Minnesota study reported a 2% reduction in feed intake for each 1% lupine in the diet..."  Alternative Field Crops Manual, "Lupine," Nov. 1997.  Or, in other words, "lupines not suitable for porcines.")


So the search lesson is clear--when you find a tool that does what you want, use it.  And in fact, search for the tool first.  You could save yourself a large amount of time!