The jonquil glade mystery / how do you know what you know? 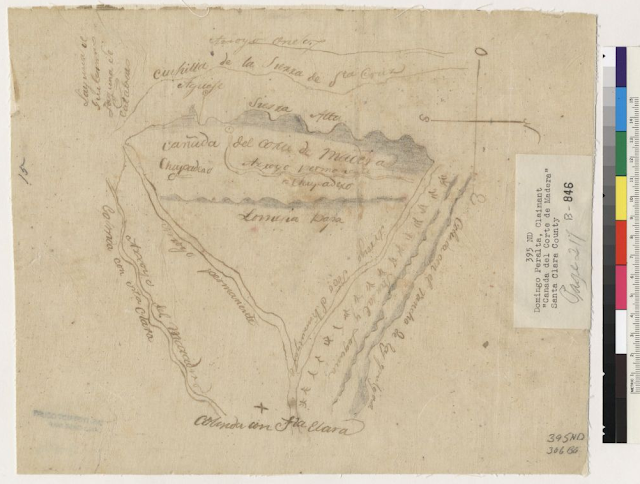 (see: http://imgzoom.cdlib.org/Fullscreen.ics?ark=ark:/13030/hb2779n76f/z1&&brand=calisphere )
So it all fit—it *cohered* with what I already knew.  What’s more, the map is from a place I’ve heard about (Calisphere, run by the University of California’s Bancroft library).
If you look at the image of the claim, there’s a museum label stuck on the right side of the image.  That’s credibility enhancing, as that’s pretty clearly a museum cataloger’s annotation.
IF, on the other hand, the compass rose had the letter “W” marking the western direction, I’d be right to be suspicious.  (“West,” in Spanish is “Oest,” hence the letter “O” marking the western direction).
It all fits.  So, without much thought, with a merest twinkle of my brain, the map, the claim, the name of the region… it all slips into my memory as a fully authorized belief.  I find it credible, and it’s written down in my neocortext.
On the other hand, on that same time as I was looking at the patch of jonquils on the former Rancho Cañada del Corte de Madera, I also walked over a trail that has a huge number of  clam shell fragments glinting white against the dark brown earth.  This had always puzzled me, as the trail is about 8 or 9 miles from the bay.  What were the clamshell fragments doing there?
I happened to run into two park rangers and asked them, “what about those clam shell fragments up on the trail?  You don’t suppose it’s a shellmound do you?”
The answer came back a bit too quickly.  “Nope.”   One ranger gave the other a sidelong glance.  “No way there’s a shellmound up there.”  The second ranger agreed, again, a bit too quickly.  “No sir.  There never was a prehistoric village up there.  No way.”
Uh… Okay.  Their hurry to tell me there wasn’t anything there made me deeply suspicious.  It wasn’t what they said, it was the *way* they’d said it—in a rush, a little dismissively, with a sense of wanting to move onto something, anything, else.
They’re a credible source, they know a good deal about what’s in the open space preserve, but their way of saying it left a lot to be desired.  I had a few shell fragments in my hand to show them, but thought that discretion might be a good move at this point.  No need to press the issue.
The next day I went back to return the shells to the non-existent shell midden, located on a beautiful overlook above the bay.  It’s kind of a schlep to lug clams up that far, but the view is utterly worth the trek.  And besides, a couple of hundred years later, there would be jonquils at bloom just a bit downhill and to the left.
Believe me.
Posted by Dan Russell at 5:23 PM