Answer: How much did you understand when you first read Moby Dick?

The question was about the whaling ship in Moby Dick:


Captain Ahab's ship had a very strange design
that made the upper deck seem like a whale's mouth.
What was it that made this striking appearance?

This question came up because I was talking with a friend about the story of Moby Dick, and the conversation took a turn towards the symbols in the book.  We remembered there was something odd about the ship's design, but couldn't remember what.


Try to find the answer to THAT original question  ("There's something odd about the Pequod, what is it?").  That is, so to speak, a tougher kettle of fish to answer.  But I couldn't ask you to solve that problem because our question was inarticulately wrapped up in what we thought of as odd.  "Odd" in something about the ship.  It's a case of "I'll know it when I see it..."


So when I wrote this challenge question, I included the (big) hint of "upper deck" and "like a whale's mouth" in my description.  I didn't have that when I started.  YOU were lucky.


I realized quickly that searching for things like [ odd ship design ] and [ unusual design Pequod ] wasn't going to work.  I was hoping that someone might have written a senior thesis on the topic and those phrases would have hit one of those.  But no dice.


A search was going to have to involve the actual text of the book.  I then realized that I could just download the entire text of Moby Dick and do a manual search through the text of the document, looking for places where the author wrote about the ship.


Where can you get the full text of Moby Dick?  Don't bother looking in Google Books, they don't let you download the full text.  You've got to go to a resource like Project Gutenberg which holds full texts of many out-of-copyright books, including many classics like Moby Dick.  A quick search for [ Project Gutenberg ] (or [ download text Moby Dick ] ) and I had a copy on my hard drive.  At 1.3Mb, it's a small download.


I got the HTML version of the book so I could do my searching in Chrome.


A little unsure where to begin, I started looking (using the infamous Control-F method) for places in the text where Melville was describing the ship.


Now the great thing about Control-F in Chrome is that the scroll bar shows you all of the hits throughout the entire document as little tick marks in the scrollbar.  Since in this case the document is all of Moby Dick, this shows the occurrence of my first find (for the word "ship") and the locations of all other instances of the word  throughout the entire novel.   If you look closely at the find box (top) you'll see there are 717 instances of "ship."  A few too many to check out. 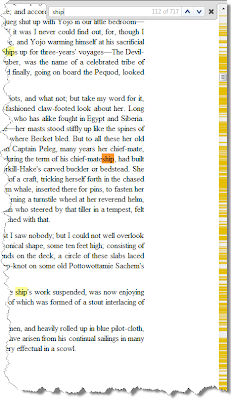 It's pretty clear that this word wasn't going to work--there are 717 hits for the word "deck" in the novel.  The question is what would work to find me this "odd ship design" passage?


Luckily, it's pretty quick to test words that are probably involved in a passage about the design of the ship.  I tried words like "deck" and "design" without much luck.  (Too many hits.)  But then I tried the word "features" (in the sense of "design features")...  To be honest, I didn't really hold out much hope for this, but it worked!  There are only 11 occurrences of "feature" in the entire document, and the first instance of the word was in the following paragraph (Chapter 16, "The Ship"):   (highlighting mine)

You may have seen many a quaint craft in your day, for aught I know;—square-toed luggers; mountainous Japanese junks; butter-box galliots, and what not; but take my word for it, you never saw such a rare old craft as this same rare old Pequod. She was a ship of the old school, rather small if anything; with an old-fashioned claw-footed look about her. Long seasoned and weather-stained in the typhoons and calms of all four oceans, her old hull's complexion was darkened like a French grenadier's, who has alike fought in Egypt and Siberia. Her venerable bows looked bearded. Her masts—cut somewhere on the coast of Japan, where her original ones were lost overboard in a gale—her masts stood stiffly up like the spines of the three old kings of Cologne. Her ancient decks were worn and wrinkled, like the pilgrim-worshipped flag-stone in Canterbury Cathedral where Becket bled. But to all these her old antiquities, were added new and marvellous features, pertaining to the wild business that for more than half a century she had followed. Old Captain Peleg, many years her chief-mate, before he commanded another vessel of his own, and now a retired seaman, and one of the principal owners of the Pequod,—this old Peleg, during the term of his chief-mateship, had built upon her original grotesqueness, and inlaid it, all over, with a quaintness both of material and device, unmatched by anything except it be Thorkill-Hake's carved buckler or bedstead. She was apparelled like any barbaric Ethiopian emperor, his neck heavy with pendants of polished ivory. She was a thing of trophies. A cannibal of a craft, tricking herself forth in the chased bones of her enemies. All round, her unpanelled, open bulwarks were garnished like one continuous jaw, with the long sharp teeth of the sperm whale, inserted there for pins, to fasten her old hempen thews and tendons to. Those thews ran not through base blocks of land wood, but deftly travelled over sheaves of sea-ivory. Scorning a turnstile wheel at her reverend helm, she sported there a tiller; and that tiller was in one mass, curiously carved from the long narrow lower jaw of her hereditary foe. The helmsman who steered by that tiller in a tempest, felt like the Tartar, when he holds back his fiery steed by clutching its jaw. A noble craft, but somehow a most melancholy! All noble things are touched with that.

There's the answer:  the Pequod was decorated with the teeth of sperm whales all around the top of bulwark on the topdeck.  (And the tiller was crafted from a single piece of whale jawbone...)

So.. what's the take-away message from a SearchResearch perspective?

First, that sometimes you really have to dig into the material at hand.  Since I really didn't know quite what the correct section was, I really didn't have anything much to go on.  So I started a fishing expedition with terms that I thought would be likely to be involved.

Key to this iterative search, though, was using a fast finding tool that would both find the search term (whatever word I was looking for) AND give me an overview of the entire document with all of the hits.  If I'd had to sequentially check all of the 717 hits for the word "ship" one-at-a-time, I would have given up longer before finding the answer.

You have to have sharp tools to investigate deeply.