Here’s a tale that I’ve been trying to track down.  Put on your best discoverer’s hat and see if you can figure this one out as well. 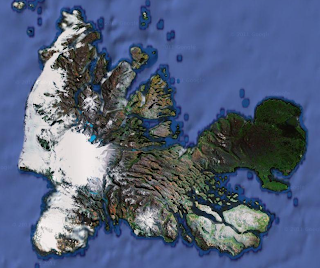 I was told that not long after the Seven Years War, a Breton privateer discovered islands near Antarctica that he believed were the headlands of a new and previously undiscovered continent.  That didn’t pan out, but he did find islands  that are somehow related to an entire submerged small continent that was formerly covered in pine trees.  Strangely enough, that watery sub-continent is in turn somehow connected to the large hills near the city of Rajmahal in India.

WHO found WHAT islands, and WHAT IS their connection with India?

You don't need any particularly tricky search techniques for this, but you do need to be willing to look around and find connections that you might not have thought about.