Memories of green lines on the land


There are lines on the landscape that you can’t see easily, lines that mark the memories of stream pathways and old property boundaries, leaving a persistent impression of the past on the surface of today.

We’ve all seen lines of trees before.  Depending on the place, straight tree lines are usually old property boundaries, with the trees marking off the edges of ephemeral property ownership that changes at decade speed, while the trees change at century speed, out of sync with the short / fast / furious lives of those that would use them to mark a bounding box around what they think they temporarily own.   In California there’s been a long-standing tradition of using eucalyptus trees to mark off edges, even though the trees remain long after the human claimants have been returned to the soil as nutrients.

What’s even more remarkable is that these green lines can be seen through Google Maps.  The aerial images (“Satellite view,” even though many of the images at the scale we’re interested in are actually taken from planes) often reveal the past of a place through the green lines.

In the above image you can see a long line of trees just below the lake on the left.  That's Felt Lake in the Stanford University foothills.  But those are 60 foot tall eucalyptus trees that used to mark the southern end of the old Stanford farm.  You can pretty clearly see what the boundary was.  That line of housing development crowds right up next to the property line, making a nearly vertical slash through the hills.

But I’m really more interested in the ways memories of streams persist in the landscape.  Here’s an aerial image of some land in Palo Alto taken in 1948.  The sinuous line of trees running through the photo is Matadero Creek.  The straight line running almost vertically is a railroad track, and you can see that the line of trees following the creek stops at a major highway—in this case it’s El Camino Real, an old road that has been in that location for hundreds of years. 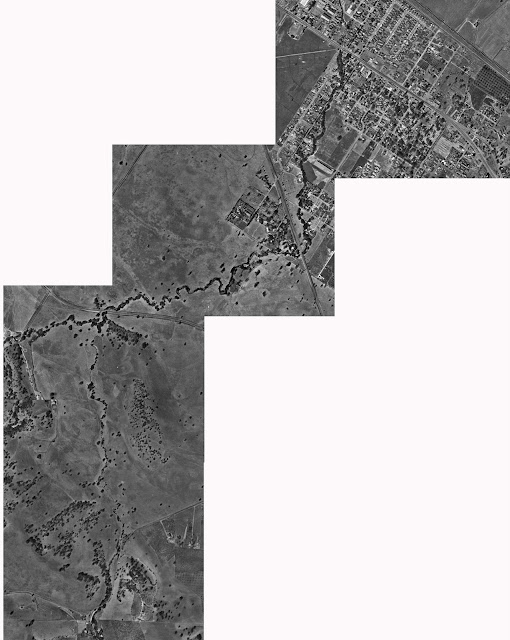 What captivates me about this is that the tree lines persist for a very long time, even through 50 years of intense development.  As you can see, the line of trees along the creekbed have survived, in a sense, for half a century.  The creek is in a very different setting now; once it enters the industrial park, the stream is completely driven by runoff from acres of asphalt, and no longer fed by trickles from grassy fields. 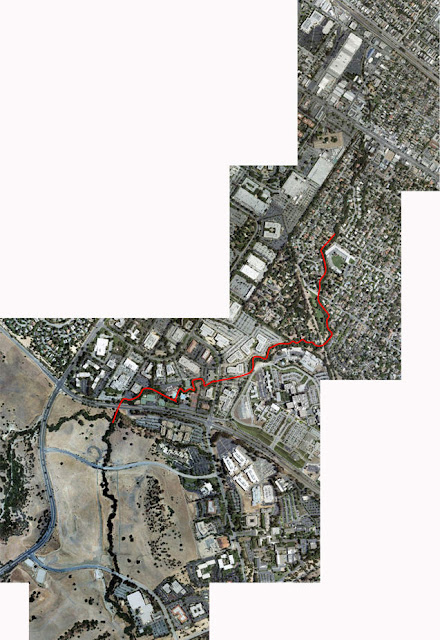 This is a recent image.  I’ve highlighted in red the creek once it enters the Stanford industrial park  and flows into suburbia.  It’s really broken only in two places—first when it crosses Foothill Blvd (just before entering the industrial park), and then just a bit later when it was channelized to go beneath the Tibco building (the straight segment in the middle of the industrial park).

Seeing these images makes me think of how much of a lasting impact we have on the world.  Developers channelize creekbeds, but the lines still persist.  It’s hard to undo that much geography, it’s just incumbent unless you move the entire landform.

These lines of trees (oaks, mostly) explain something you see from time to time walking through suburbia.  Every so often, there’s a tree that is way out-of-size, something that just seems incongruous with its surround.  If it’s an oak, chances are good that it’s part of a much larger structure—a persisting line of trees that remembers a world before the developers came.

I find this both heartening and sad at the same time.  I feel lucky to have come along at a point in time when one can still see these marks on the land.  At the same time, it’s a bit like finding a palm tree deep in a scrub oak woodland—the marks of people on the land are inescapable, and often woefully out-of-place.

We cover, we bury, we replant… and still the land manages to persist.  The big oak in the suburbs is an oddity, way out of keeping with the other trees in the area, until you realize that it’s been there for 200 years.  Ultimately, that makes me glad.  I hope the trees win in the end.

And feeling lucky enough to live in a time when I can see both the trees from the ground and from the air through Google Maps and Google Earth.

Searching for more trees and more green lines on the land...