Answer: What do these cameras do?

After the all of the hubbub of the IRE conference quieted down, I turned my attention to answering our question from this week, which is, after all, a kind of investigative bit of reporting.

As I said, when I posted this Challenge, I didn't know the answer.  After more hours than I care to admit, I think I have the answer... or at least part of it.  I'm sure I'll keep poking around on this one over the next couple of weeks, trying to nail down the details.

The Challenge was, given a few pictures:


1.  What are these cameras doing?
2.  Who owns (or installed) the cameras?
3.  What happens to the images being captured by the cameras?

To remind you, here's the camera we seek.  They're mounted on top of streetlights at intersections, one pointing each way.

crowd sourced database of camera enforced locations.  Begun in 2001, the open database of red light cameras and speed cameras (and fines) is continually updated by users from around the U.S.

But this shows only 1 camera, and that's in East Palo Alto (which is a separate city from Palo Alto).  Another dead end.

It seems that these cameras aren't "red light" cameras (those tend to have multiple lenses and a flash), and they're not speed cameras (which have a different shape).   See this Trapster article for a nice way to tell them apart. See also this article on Digital-Camera-Pictures blog.

One well known place for clues about hot-button topics like this is the local newspaper.  I started checking them: the Palo Alto Post, and the Palo Alto Weekly are the two big newspapers in town. (Well, there is a 3rd newspaper--the "Daily News," but you can't search them via Google as they prevent the Google spiders from indexing their content and their own search engine seems broken.)

So let's check the local news:

Found this article which asks "So what are those camera atop the streetlights on Arastradero?"  (Great question!  I swear I didn't know about this article before writing up the Search Challenge.)

One letter-writer points out that the Santa Clara County has its own traffic cameras.  The reader helpfully provided the link, but it was a dead link.  But that gave me enough of a hint to search for

(www.sccgov.org is the site of the Santa Clara County)

The first hit looked like what I wanted:  "View Real-Time County Traffic Cameras"

And within a few clicks I was able to see the live map of cameras that the County runs.  Here it is, live traffic monitoring! 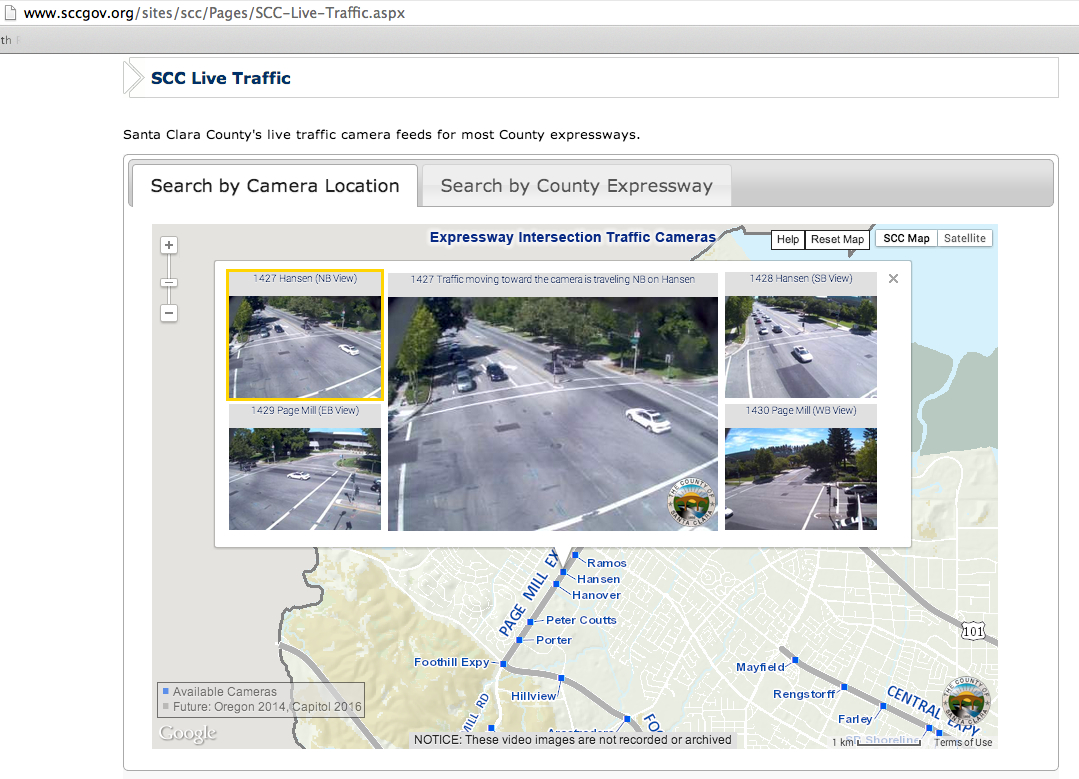 I'd thought I'd tracked it down.  BUT NO!  This is not what I'm seeking!

First, the map above doesn't show the street intersections I was curious about (Charleston and Nelson, for example).   When I look at the mapped intersections using Streetview, I find that these are SQUARE cameras, not cylindrical.  It's a different kind of camera.

By this point I'd spent several hours looking through various resources.  And while I'm happy doing that, it seemed as though I was missing something obvious.

So I looked up the phone number of the Traffic Department for the city and gave them a call.

I left a message, in just a couple of hours, one of the folks from the City of Palo Alto Traffic Department called me back.

In our conversation he confirmed that the "white cylindrical cameras on the streetlights" were "traffic monitoring cameras" that are used to trigger light changes.  That is, they're currently used to watch the box opposite the traffic light and then switch the light (a task that was previously done by in-the-asphalt ground loops).

When I asked "but I see the maintenance guys still fixing the loops at these intersections," he replied that they're still used for redundancy.

"What happens to the video?" I asked.  "It's written to memory at the curbside box," he said, "but it's not transmitted anywhere else."

"Yeah, really."  He paused.  "Although if we ever get them connected to our fiber network, we'll be able to monitor those intersections in real-time."

So there you have it.  The official word from the City itself.  With only a tiny hedge about what's possible in the future.

The obvious lesson here really is the most obvious--sometimes it's faster just to call the City and ask.

Second, there are still some things that are hard to find.  You'd think, in these days of goverment transparency, that something like a "map of the traffic cameras" would be on the city's website, but that apparently isn't the case.


Third, as you do your investigation you have to keep checking... in my case, I found many dead ends and things that LOOK like success (the bicycle cameras, for instance), only to discover that they weren't really what I was looking for.

A useful attitude to keep in mind is one of supreme skepticism.  If it helps, imagine that you're going to show your newly discovered result to your teacher and explain why you believe this is the right answer.

Imagine, if you will, trying to explain what you found to this guy on the right...

I was impressed by the quality of the searching done by the SearchResearchers.

Like Fred, I found the West Sacramento page ("What are those gizmos?") in an early search, but I wanted to get deeper into the story, so I kept looking.

Jodimillard also found the SCC camera site, but correctly noticed that it wasn't what we were seeking.

However... Unlike Ramón, I did NOT find the City of Palo Alto Request For Quotation for the video camera installation.  He did.  That's a great find.  (But we need to remember that the cameras have been installed since at least 2004.  This RFQ is for 2011, and the work wouldn't get done until much later.

Nevertheless, the RFQ asks for the installation of the "Vantage RZ4-AWDR color camera," which you can look up to find the manufacturer specs, and a picture of the camera. 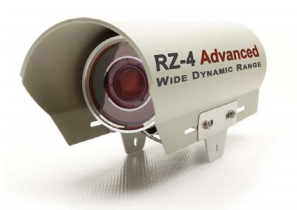 which is just what we were looking for.

When I read the RFQ carefully I found this interesting phrase:


6.1.8  The interface unit shall support streaming video technology using MPEG4 and H.264  standards to allow the user to monitor video detection imagery over the Ethernet  interface. Motion JPEG streaming video shall not be allowed.

6.1.10  The user shall be able to select a quad view of all of the four cameras simultaneously  on the output video monitor by depressing the menu button.


Based on this information I did a search for

and found that the contract (for $79K) was awarded to Iteris (the maker of the detection system) on June 1, 2011.  I assume that those cameras were added sometime after that.

Now, if I could only find that room buried deep within City Hall that monitors all of the (hypothetical) traffic cameras.