I asked two simple routing questions that takes a bit of figuring to get an answer:

In both cases, there are two obvious routes from Point A to Point B.  The question is simple:  Which route is flatter?  (To be precise, find a route with the smallest elevation gain.)

1.  Suppose I'm in the Southwest of the US and want to do a bike ride from Farmington, New Mexico, to Durango, Colorado.  What route would you recommend for the least overall elevation gain between the two cities?

2.  Suppose that a few months later I'm in the Southeast of France and want to ride my bike from Echirolles (France) to Oulx (Italy). What route would you recommend for the least elevation gain between these two cities?

So to solve the first Challenge, the easiest thing to do is just use Google Maps, use "Find Directions" and then select the Bicycle Route option.

Here I've just asked for the bike route from Farmington, NM to Durango, CO.  It's a lovely ride, almost 52 miles long, with an elevation gain of 1,588 feet. 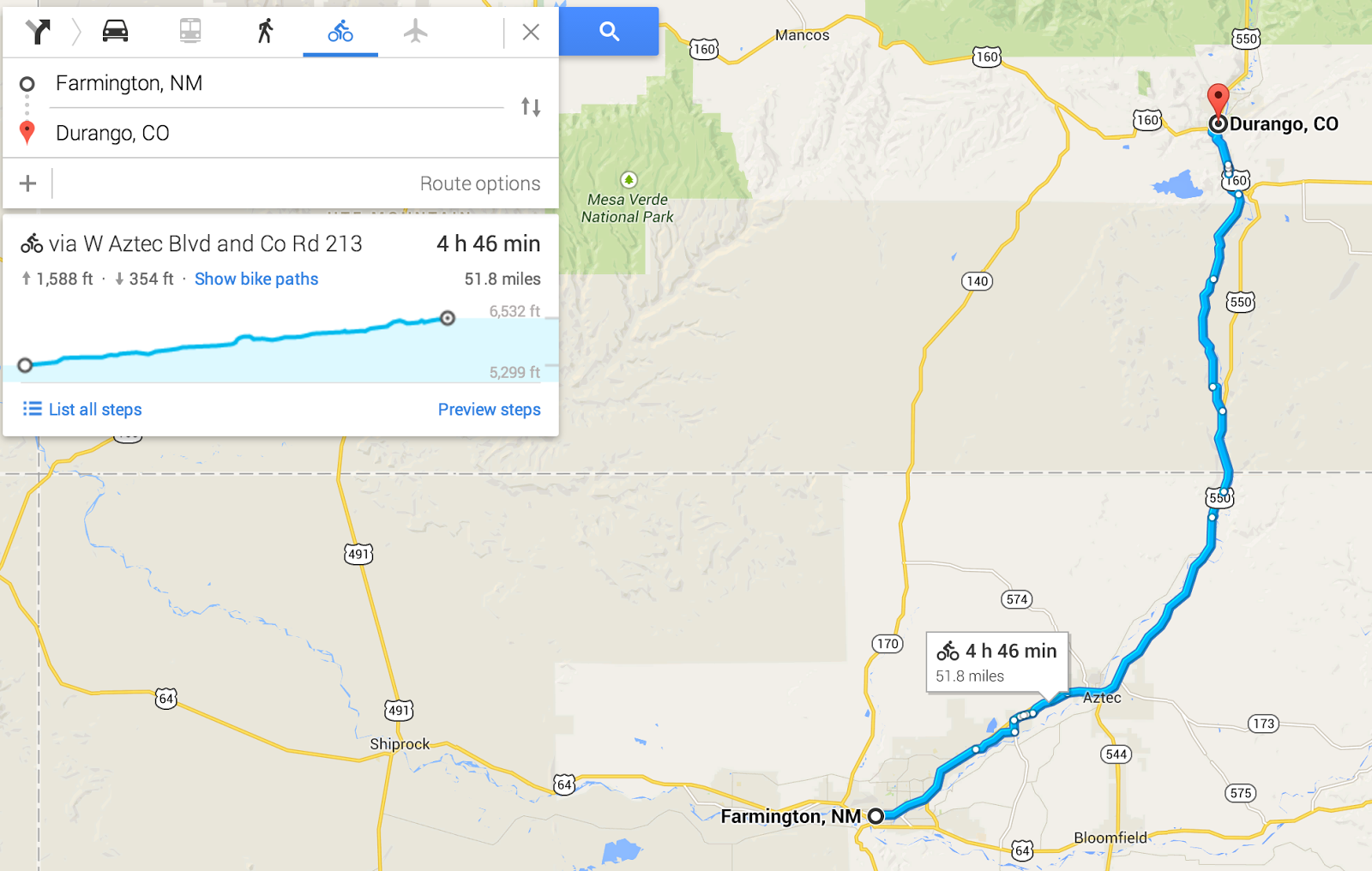 There's another obvious route that would leave Farmington on 170/140/160 to Durango.

To see the elevation profile for that route, I just drag the route from where it is (by pressing-and-holding on one of the small circular "control points" on the line) to where I'd like it to go: 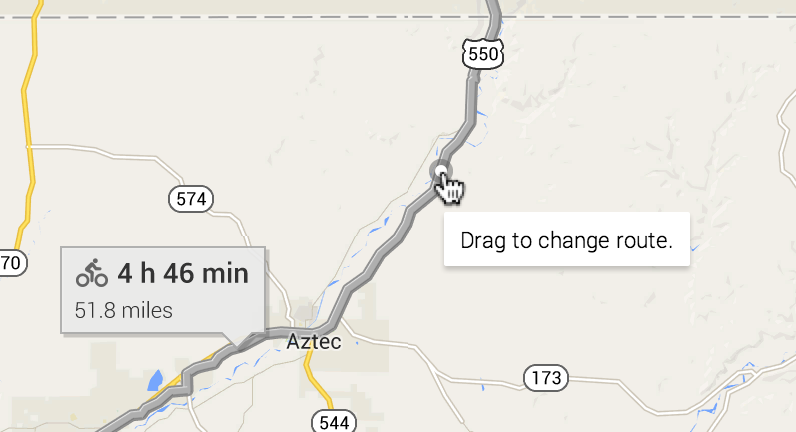 Once I've moved it to Route 170, the map looks like this: 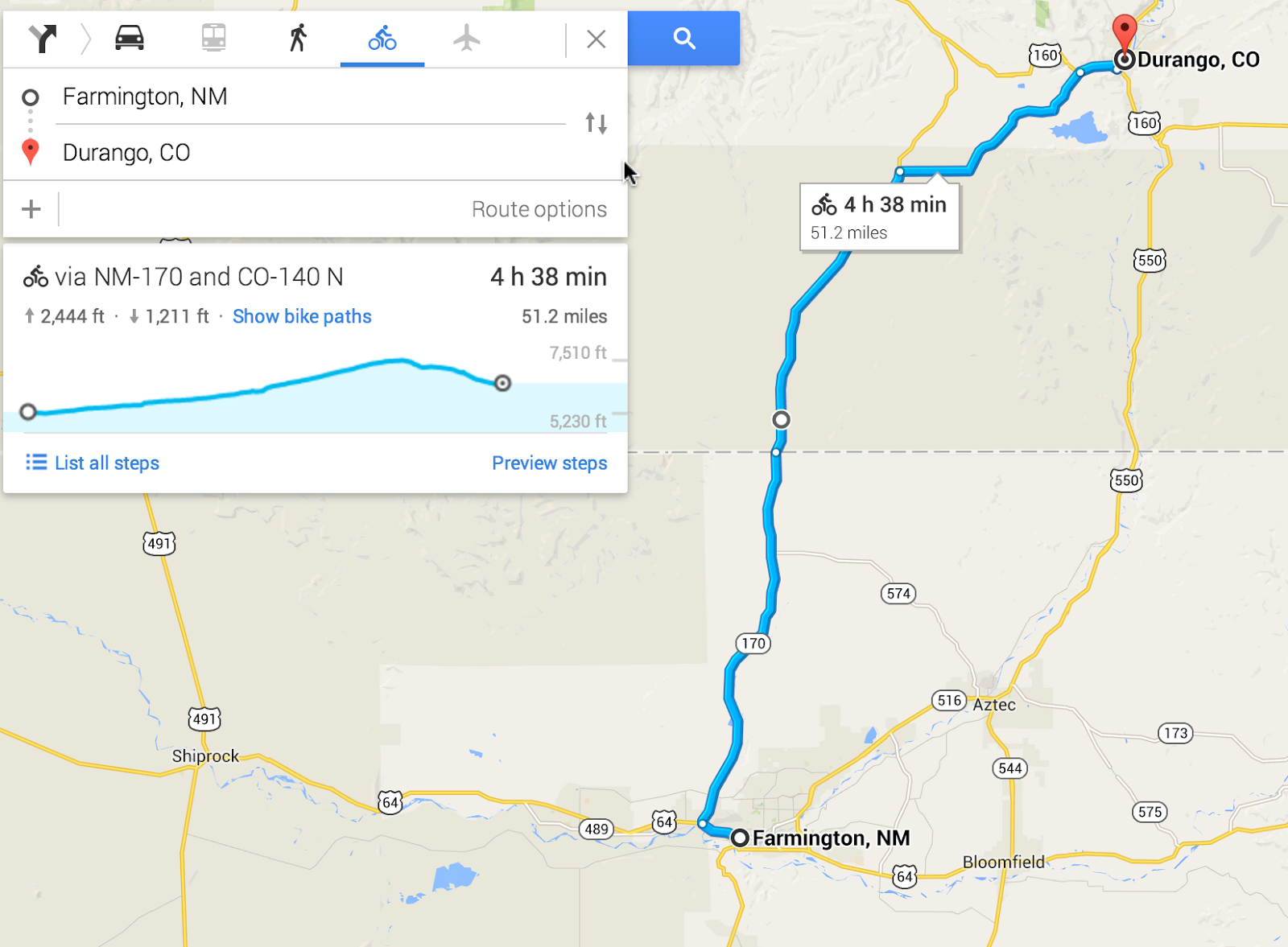 But as Ramón pointed out in his link to the "Climb = what flat distance" article, there are often many factors to take into account when computing route relative difficulty.  This is a fascinating discussion, but since I want to ride this route anyway, I'm just going to pick the route that has the least elevation gain.  (Side note:  That article is written by cyclists in Florida, one of the world's flattest states, where, I suppose, they worry about things like this!)

Of course, there are other tools you can use to compute the same kind of information.  In the comments, Rosemary points to the routes she explored using Strava, the athletic tracking and mapping system.  Here's one of her maps for the Farmington-to-Durango trip:

It's important to recognize that there ARE multiple tools to figure out this kind of information, each with its own capabilities.  In the Strava app you can sweep your mouse over the elevation profile at the bottom and read off the elevation and grade.  As you move the mouse, the blue dot follows along on the map just above it.  (This is true for Google Maps as well--move the mouse along the profile and see where the dot is on the route.  But Maps doesn't show the elevation or grade at that location.)

Answer to route 1:  I'm going to stick with the first route (550/160).  It's a little less climbing.  And spot-checking the Streetviews along the route suggests that the road has nice shoulders, not a lot of traffic, and nice views.

Question 2:  Echirolles (France) to Oulx (Italy)  We already know that Google Bicycle Routes won't work there?  What to do?

Answer:  Find another tool to do the same kind of work.  I liked Ramón's query to find such tools

this set of results leads to many tools for doing this kind of analysis.  For my profiling, I happened to use Veloroutes.org (but others work as well).  Here's the profile for the obvious southern route from Echirolles to Oulx: 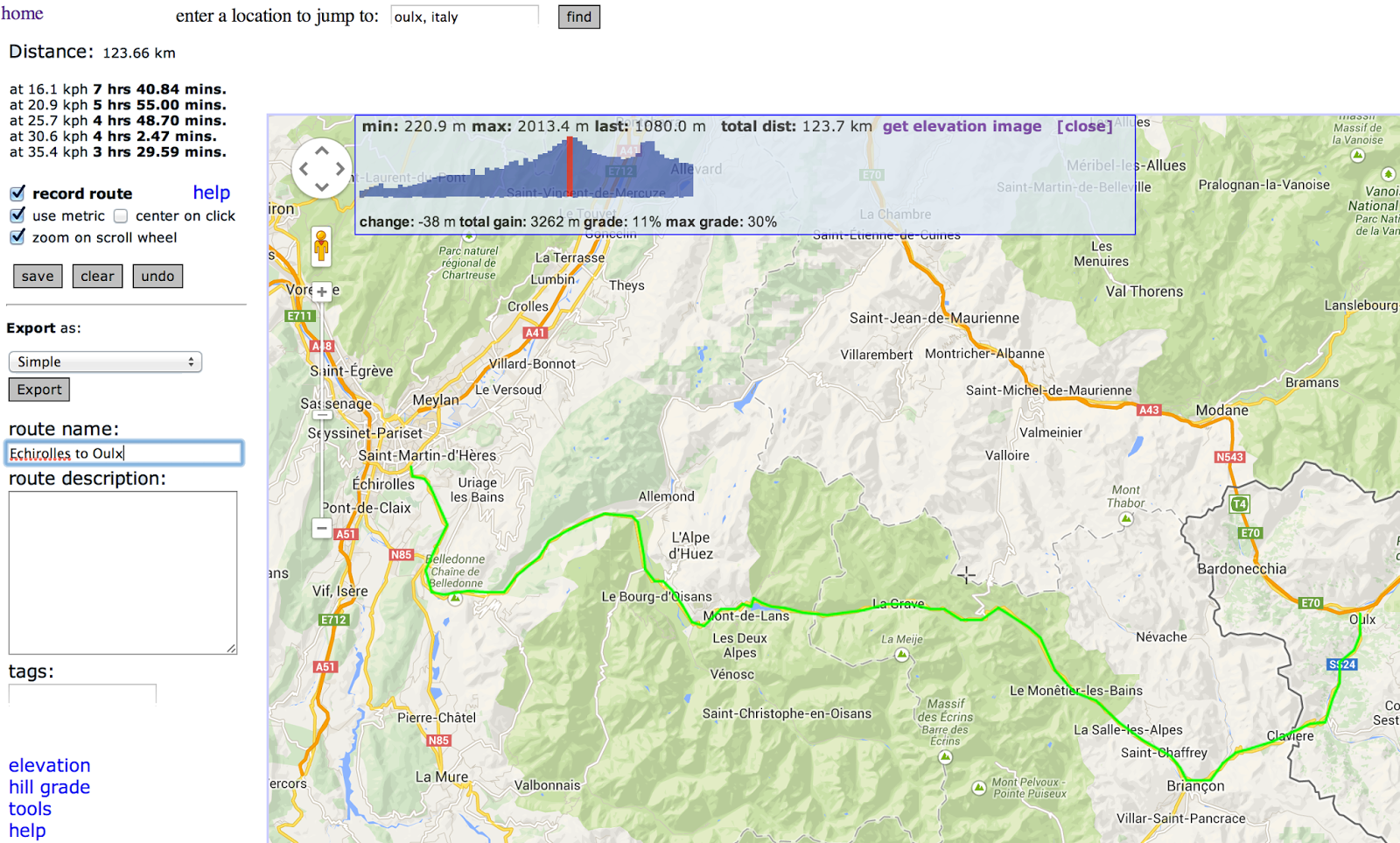 AND... If you click on the "get elevation image" (upper right of the blue box), you'll see just the elevation of the route selected.

Here, for contrast, is Rosemary's Strava map of the same route: 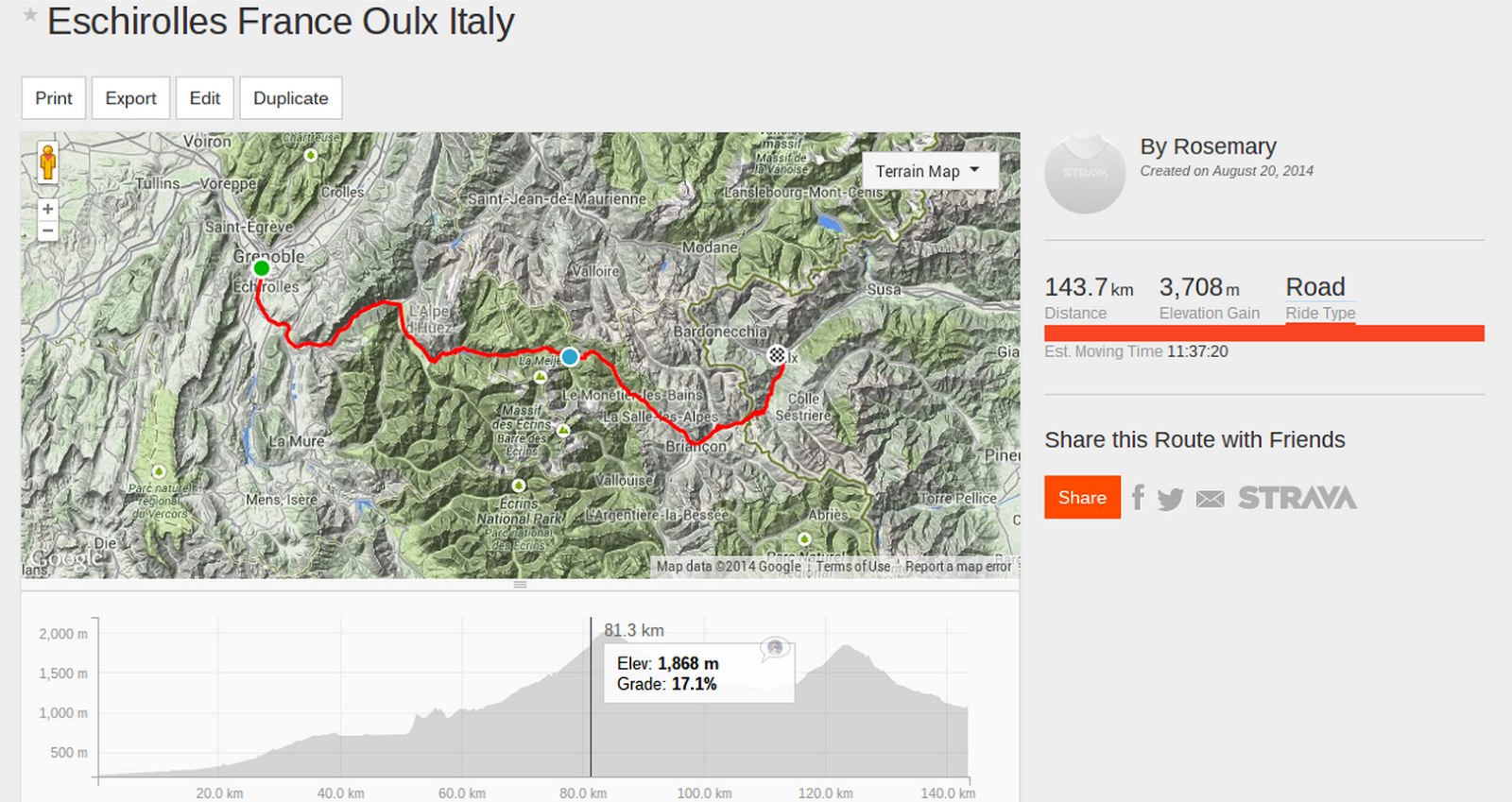 Interestingly, this map shows a max grade of 17.1% (which is much less than the 30% I saw on my map). Since neither mapping service tells how they measure grade, it's hard to know which is more accurate--but all cases, this is a steep route.

When I did the same plot for the other (northern route), I get this map: 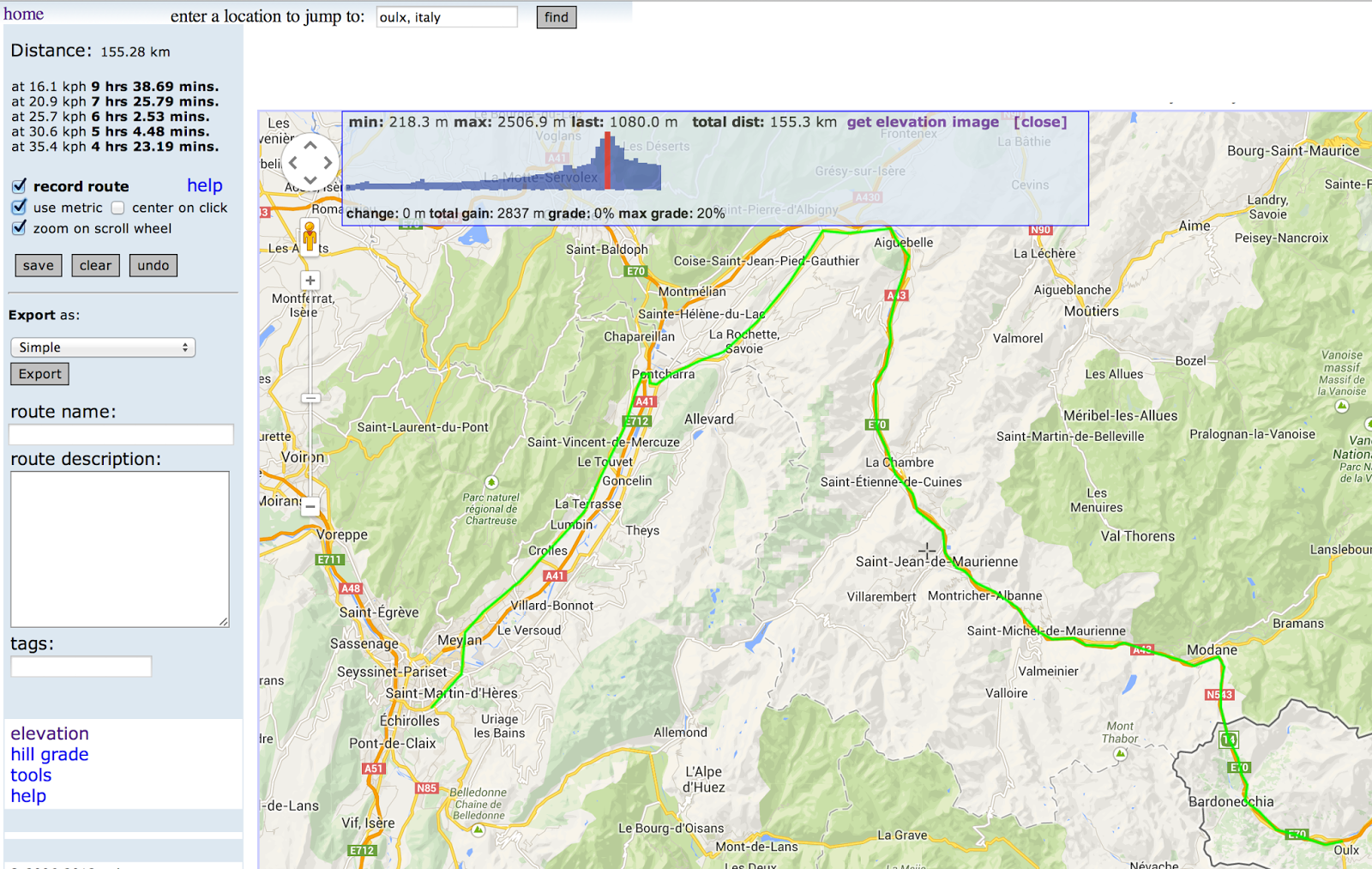 Here's the elevation profile for the northern route.

Ramón also found a different bike route elevation site (PerfildeRuta) that does very much the same thing (also available in English).  Here's their diagram of this route.  Note that they believe the maximum grade on this route is 47%!  (Really?  That's not a grade--those are stairs!) 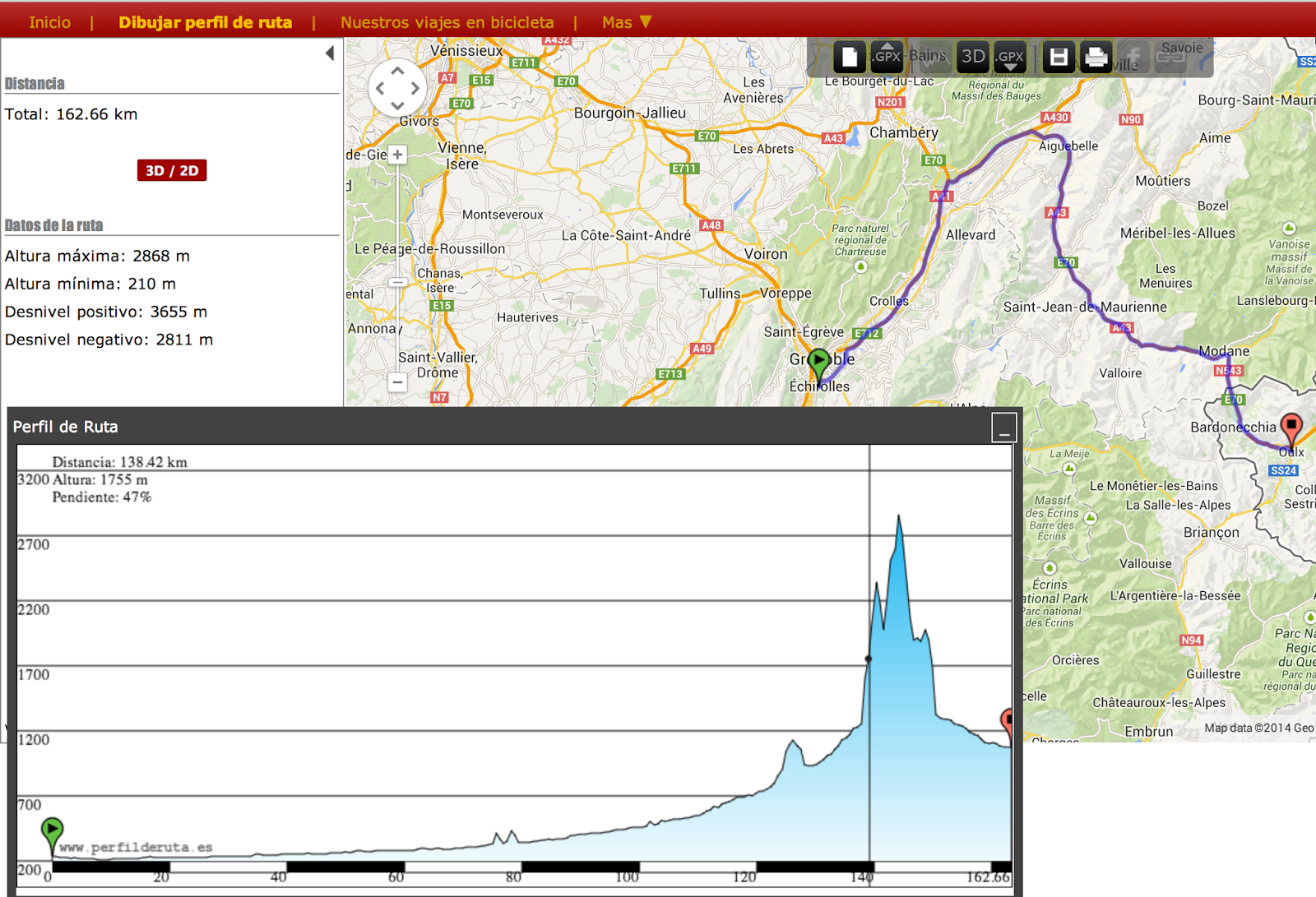 It's clear that the Northern route is flatter, albeit slightly longer.

BUT the Southern route is very appealing.  And as Rosemary points out, it goes right next to the Alp d'Huez, one of bicycling's most revered roads for its dramatic races throughout the history of the Tour de France.

If I was to do this ride, I'd definitely go the Southern route.  Longer, steeper, but MUCH more appealing.

(1) Always keep up-to-date on announcement about new search capabilities.  While people have always created elevation profiles, it's much easier if you know about the tool that does exactly that.

(2) When using a new UI (such as that in the VeloRoute elevation profiler), pay attention to options that might not be well-marked.  The "get elevation image" is exactly what I wanted from this map, but it's a pretty hidden function.

Which is why we do SearchResearch; it's a fascinating way to learn more about the world at large.

And now I need to go for a bike ride.  Thanks to everyone who wrote it on the comments.  Keep 'em coming.