Answer: Where can you find this in the street?


First off, excellent work by all.  I'm not sure I have a lot left to add to the discussion.  You're a crack SearchResearch team!

But let's look at some of the ways people investigated our Challenge this week.  Remember that I asked:


1.  Can you find the GPS coordinates of the manhole cover shown below?  And why does it have that odd shape?  (Neither triangular nor circular...) 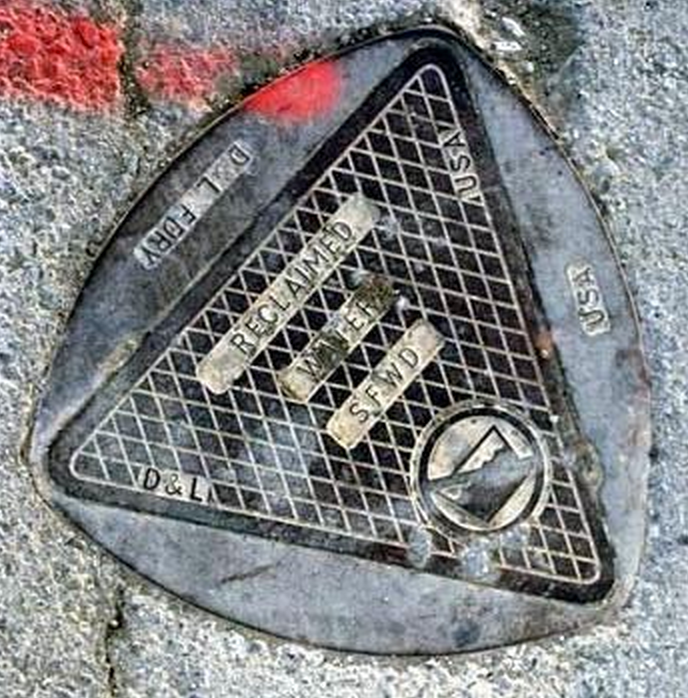 When I posed this question, I didn't dream that you'd actually be able to find THIS PARTICULAR cover, which is why I added "...you don't have to find exactly this instance of a manhole cover, but just the coordinates of any manhole cover that has this particular shape."

But I didn't actually do the Search-By-Image to test that before posting.

In a great feat of sleuthing, Passager, AlmadenMike and Pete Warden both found that the original image was by Owen Byrne.   That's great.  Nice work.

Then Pete went on to contact Owen Byrne on Twitter (@owenbyrne) where he confirmed that this particular photo was his.  Oh, and by the way, Owen's reading of the comments thread helped him remember that the original photo was taken at "4th and China Basin in Mission Bay."

With that hint, it's simple to use StreetView to fly over to the intersection of "4th and China Basin" in San Francisco and find the following. (I added the red circles to highlight the covers embedded in the street.)

A quick Command-click (or right-click for PC users) on the intersection tells me that this is 37.772019, -122.389509.  None of these have a red stripe, but the color could have well worn-off (or was not yet applied) when the StreetView car drove by.


Nearly everyone else did some version of an initial search for:

and quickly learned that these particular covers are "Valve covers used in the Mission Bay Project of San Francisco to differentiate reclaimed water from potable water are in the shape of a Reuleaux triangle."

When you check out the meaning of Reuleaux triangle, you find the Wikipedia page which tells us that  "It is a curve of constant width, meaning that the separation of two parallel lines tangent to the curve is independent of their orientation. Because all diameters are the same, the Reuleaux triangle is one answer to the question "Other than a circle, what shape can a manhole cover be made so that it cannot fall down through the hole?"

And, like many other people, I found this fascinating, and thought how clever these folks were to design their valve covers in this way.

But then I followed my search principle of "Use whatever information you have." which included the name of the foundry that cast the cover.  (Look at the original image:  it says "D&L Fdry" on it.)

So I did a search for that:

which led me to the foundry's web site... and their catalog!  It didn't take much looking before I found the catalog entry for the "Reuleaux triangle" valve.

Here's the diagram from their catalog:


And so while it's true that a Reuleaux triangle cannot fall through the hole it inscribes, this particular design doesn't take any advantage of that fact.  The hole is so small that there's no way the cover would fall through.  (In any case, the Reuleaux triangle shape is for the outside of the valve cover, and not the shape of the cover itself.)  The bottom line is that this clever shape is used solely as a unique visual shape, and not for its physical properties.  It might just as well have been just a triangle.

Ah, well.  It's a great story, just not the story you might have thought.

Excellent job by all.  Special kudos go to Pete for tracking down the original photographer and asking him where it was!

I hadn't really planned on doing searches for these covers, especially since I know where they are!

A lesson for me--always do a Search-By-Image to see if the image you're using actually appears somewhere else!

As most searchers discovered, it wasn't too hard to go from description to the key idea (the "Reuleaux" triangle) that led to identifications.

But as I point out, just because something has a unique geometric property ("constant width curve"), you should NOT assume that it actually makes use of that property in a meaningful way.  I have to admit to being surprised when I saw the D&L Foundry catalog.

And finally... I'm glad that several readers commented about "never looking at manhole covers again in the same way..."  That's one of the beautiful things about getting the chance to write this blog--I see almost everything in a slightly different way these days.  I know I can find out the most remarkable things about the world.  With just a little research inclination and a few skills, the world is ready to tell you amazing stories, if only we learn to pay attention.

Excellent work by all.  Nicely done.