WHAT:  Kerguelen Islands, deep in the southern Indian Ocean


WHAT IS CONNECTION WITH INDIA:  Kerguelen's rocks are very similar to ones found in northeast India near the Rajmahal Traps  (those hills I mentioned).  The traps were formed by a geologic hotspot that initially formed in Gondwana.  As the plates shifted over time, the hotspot emitted a series of eruptions that left underwater ridges and plateaus over time.  As the surface shifted, this hotspot gave birth to both the Rajmahal Traps, underwater features like the Ninety East Ridge and the Kerguelen Islands.


Now, the longer answer... How did I search this one out?


When I first heard about this problem, all I knew was that the discoverer was 18th century French.  A few searches like [ French privateer island discovery ] I finally found that it was the Kerguelen Islands (after a few false starts--there were, after all, other islands discovered by the French--Réunion, Mayotte, etc.).


When trying to find out what the connection was between Kerguelen and India I read an article about the Kerguelen Plateau.  That's the microcontinent ("once covered in conifers") that's now underwater 1 - 2 km underwater.  That got me to thinking about possible geological connections between the plateau and the striking ridges in the Indian ocean.

Following a search for [ Kerguelen India hotspot ] leads pretty quickly to a nice article at PhysOrg.com detailing the connection between the two.  Here's my simplified diagram: 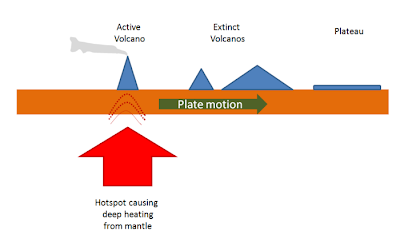 As the plates move around above the hotspot, a line
of volcanoes and basaltic flood plains (what become
plateaus) forms in a line above.
And as reader Hans pointed out,this is wonderfully documented in the article "Ar(40)/Ar(39) Geochronology of the Rajmahal Basalts, India, and Their Relationship to the Kerguelen Plateau" (J. Petrology, v43, n 4, p 1141-1153, 2002) 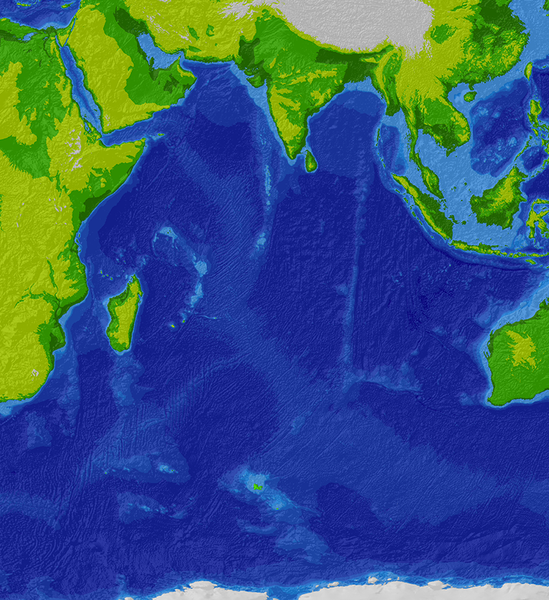 Bathymetric map of Indian Ocean (from  SRTM30_plus via Wikipedia).
Note the striking ridge (Ninety East Ridge) pointing nearly due
north from Antarctica to the Bay of Bengal.

Postscript: I think I the challenge was harder for me than for you!  When I started, I didn't even know where the islands were!  Just figuring out that they were in the Indian Ocean took me 15 minutes.  So when I wrote this question, I gave several people a head start--they cleverly shortcut the whole search problem with a query of  [ Antarctic Islands India ] which gets you to the Keguelen Islands pretty easily.  Well, as I say, it's an open-internet search challenge.


But in the next few weeks we'll make the problems a little more difficult--until we're ALL super searchers!