Where's the Advanced Search button? (It's where the Language Tools went)

As you probably have noticed, the Google UI is going through some changes as we try to add increasing amounts of capability without making the whole thing bog down with a million additional widgety items on the search page.


It's a design challenge, that's for sure.  What we're trying to do is to improve the searchability of the web--usually that means adding new features for search (such as time-based restrictions) or location-based search (which you can do by using the "Change Location" widget in the left-hand panel).


Recently, the "Advanced Search" button moved from where-it-always-was (right by the search box) to under the gear menu in the upper-right corner of the search page. 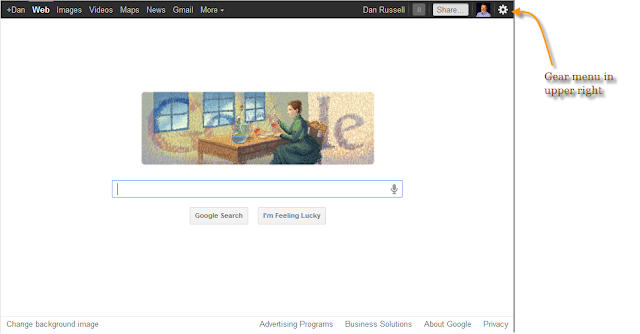 When you click on the gear, it will show a pull-down menu that looks like this (although with your name and your picture instead of mine). 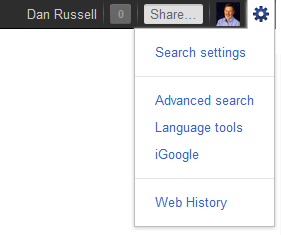 Note that this is ALSO where the Language tools ended up.  That's where you can Search in another language,  Translate text, Translate web pages, Change your interface language.


I've read a lot of people who aren't able to find the Advanced Search button (and now you know!), and a few others who are complaining because it's now too complicated.


Yes, the location moved, and you have to do one additional click to get to the page.  But really, this isn't much of a barrier.  It's different than what you grew up with, so it seems a little odd.  But really, it's not much of a hassle, unless it changed while you weren't looking.


What you should know about web applications:   Because web apps (like Google search) run in a browser, it's really easy for the development team to change them while you're not looking.  Next time you re-load the page, BAM!, a new UI can be there.


Mostly that's for the better: they can fix problems before you even notice them and they can evolve an application in ways that just weren't possible in the days when apps came on CDs and suffered a massive change every 18 months or so.  For instance, when Search by Image came online, it was with a tiny UI change (the camera icon now appears in the Image Search box)--but it lets you do something very, very powerful.


The bottom line for us users is that change is now the new norm.  Stuff will change in all web-apps (except for those that have stopped all development) on an ongoing basis.


One of the skills of a literate user of the web is the ability to understand how things change and be able to both carry their previous skills forward into the new version, and to understand what new possibilities there are now.


We searchers need to lead the charge in teaching everyone how the world changes.