Answer: Where do the bats go?

In yesterday’s challenge I asked a few questions about bats in Austin, TX.  How did you do in answering them?  Here’s what I did.

1.  What kind of bats are we seeing (at the Congress Avenue bridge)?

This is a  pretty easy question.  A quick Google search for [bats Congress bridge Austin] will quickly get you to some pages that describe the bats as “Mexican free-tailed bats.”  If you then dig just one query deeper, say [Mexican free-tailed bat] you’ll learn from multiple sources that these are small bats that are known by the scientific name of Tadarida brasiliensis,  also known as the Brazilian free-tailed bat.  The Congress Avenue bridge is home to a colony of around 1.5 million bats (at the mid-season peak population).

2.  What kind of bat is the most common bat in Texas?

This is slightly more difficult because there are so many kinds of bats in Texas, and because the Austin population is so well-known and popular, you can imagine that some folks will immediately claim that they’re the most populous bat in the state.

But there are also a few pages from the Texas Parks and Wildlife department that assert that the Mexican Free-tailed bat is the most common.  That’s good, but can we find a biologist who can give population statistics?

One way to do this is to search for the scientific name of the bat (Tadarida brasiliensis) at EDU sites.  For instance, the search [site:.EDU Tadarida brasiliensis Texas population] leads us to web pages as universities such as Texas Tech’s Natural Science Research Laboratory.
In their description of the “Brazilian Free-tailed bat” (notice that they don’t call it the Mexican free-tailed bat), they note:  “...bats that inhabit Texas caves during the summer have been estimated at 95-104 million. The largest of the caves, Bracken Cave near San Antonio, is thought to hold between 20 and 40 million bats.” So while the population in Austin is big, it's nowhere near the biggest colony in the state!

But a little looking around comparing different species of bats shows that the Mexican free-tailed (aka Brazilian) bat is clearly the most common bat in Texas.

3.  When these bats migrate, where do they go?  (We know they go somewhere south into Mexico, but can you tell me which states they visit for the winter?)

This is a bit trickier—we’re trying to figure out the names of places in southern Mexico and Central America.  But it’s a little hard to search for something when you don’t know what it is!

led me to: “Seasonal movements of Mexican freetail bats Tadaridabrasiliensis Mexicana banded in the Great Plains” by Bryan P. Glass, Southwestern Naturalist 27(2):127-133 (May, 1982)

Even though this is a partial document for the longer paper, you can still read enough to find out that different bat populations move to different places for the winter.  But the short answer is that some go to Sinaloa, Sonora, and Michoacan. 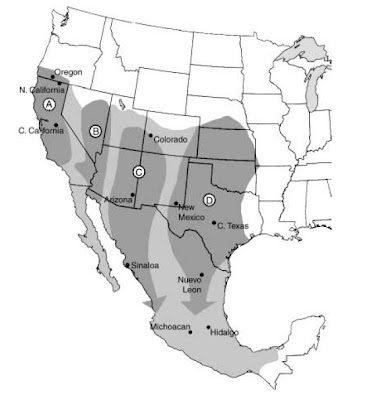 Digging just one-result deeper confirms this finding, as this map (Figure 1 from the paper “Genetic variation and migration in theMexican free-tailed bat (Tadarida brasiliensis mexicana)" by A. L. Russell (no relation to me), et al. in the journal Molecular Ecology 14, 2207-2222 (2005) illustrates, the bats pretty clearly end up in central Mexico.

Keep searching!
Posted by Dan Russell at 6:09 AM