Answer: Where on earth?

How to solve this challenge: In this case, all you know is that it’s somewhere with palm trees (given that it’s me taking the picture, probably somewhere in the tropics), and that the plane has a tail registration number.

If you do a simple quoted search [ “DQ-TRI” ] you’ll quickly find that this is a plane that was in the service of Air Fiji.  Info about the plane  It’s a Pilatus Britten-Norman Trislander registered to Air Fiji.    (Why use the quotes?  Because without them you end up with far too many off-topics hits.  DQ and TRI both have multiple meanings.  But together in a phrase... they can only mean one thing.)

You’ll find that all planes have tail numbers that identify who they’re registered to—who owns them, etc..  If you read a bit more, about the plane, you can discover all kinds of amazing information out on the open web--who made it, who bought it, where it was sold (and re-sold).  For the history of this particular plane, see TheFreeLibrary.com

To get the rest of the story, you can check the Wikipedia page for Air Fiji tells the story.  The company started in 1967, but foundered in 2009, selling off all 5 planes in its fleet.

But for our purposes, the first photo on the Wikipedia page is a photo of a plane in a nearly identical location (by Herman Luyken). 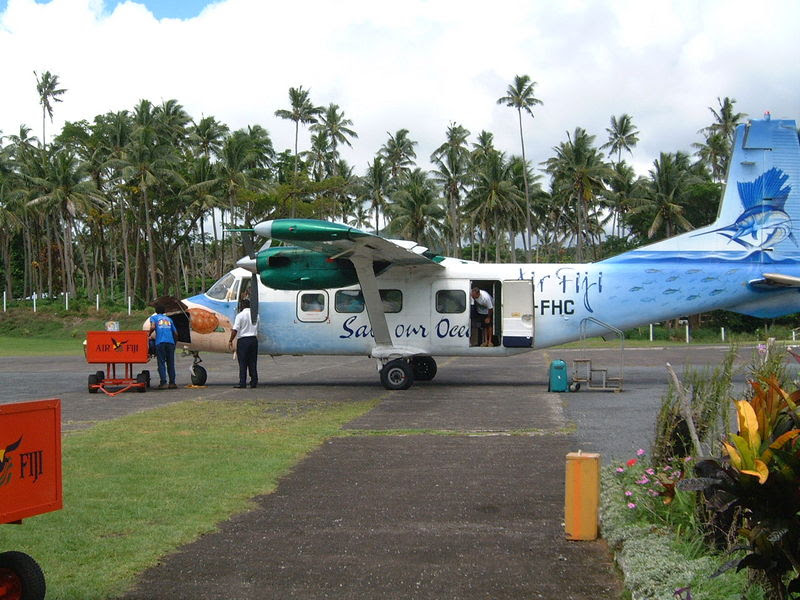 The interesting bit here is that the plane in the photo I took is in almost exactly the same spot as the Wikipedia photo.  This lets us verify that it’s really the same South Pacific airport (and not some other random airport in the tropics).

Now, how to determine the date?

The folks who looked for a picture by me from a possible trip to Fiji did the right thing.  It was a good idea, and it’s the first thing I would have done.  Except I didn’t put anything out onto the web about that trip.

And the people who looked for the metadata associated with the image (also called the EXIF data—see the Wikipedia article on EXIF)  also had a good idea.  Except I stripped out the EXIF data, just because I knew you’d be looking.   You have to be a little careful about the EXIF since it can be altered on purpose (or just by accident when the image is edited).

So how to get a decent date range?  You also know that Air Fiji when out of business in 2009 and the plane was purchased in 2002, so it has to be between those dates.

But if you compare the pictures side-by-side:

...you can see that the background foliage is very, very, VERY similar.  All of the trees are the same height, even the grass is pretty much the same between the two pictures.

Then, if you do an image search for [ Matei Taveuni airport ] you can find other images from other dates (I could find ones from 2008 and 2004 easily) that let me see what kind of background foliage change had happened during that time.  If you look closely, you can see not only that some of the plants had changed, but also the fence posts around the runway as well.

So while this isn’t an exact measure, you can be pretty confident that this picture was taken sometime in 2004.  (And I’ll tell you, it was taken on March 17th, 2 weeks after the Wikipedia picture was shot!)

In a more normal case, the EXIF data probably would have given you precisely the date.


And, as reader korffr wrote, a great solution is...


For the bonus question, I look at a hint from a previous poster, when he mentioned that a search for your dive trips didn't give much. I found a picture which listed a number of your fellow divers: "Divers in the photos include Harry Saddler, Dan Russell, Tom Gruber, Richard Santucci...."

So I did an OR search for all their names ["Harry Saddler" OR "Dan M. Russell" OR "Tom Gruber" OR "Richard Santucci" fiji ] and the term Fiji"

This leds to a picture by Tom on TraveloCafe:  http://www.travelocafe.com/2010/08/best-scuba-diving-destinations-in-world.html  korffr continues... .


Clicking on the picture goes to flickr, where this picture is part of a set taken in Fiji, which ranges between 16 March 2004 and 23 March 2004.


SEARCH LESSONS:  (1) Once again, using whatever small amount of text you have in an image can often lead you to the kind of repositories you need... in this case, all of the accumulated information about plane registrations.

(2) Sometimes you have to look for the forest AND the trees, and by comparing information you get from multiple sources (e.g., pictures from 2008 or information about when Air Fiji bought that particular plane), you can get a pretty good boundary on the possible dates.


(3) And... sometimes checking the trees means looking for friends who are on the same trip!  Think strategically.