Wednesday search challenge (5/2/12): From fish to football--what's the connection?

I’m still in Belize, scuba diving with a few friends and looking at lots of fish.  As  you probably know, the study of fish has been a hot topic in science for many years.  Here, for example, is an image from a 17th century scientific study of fish. 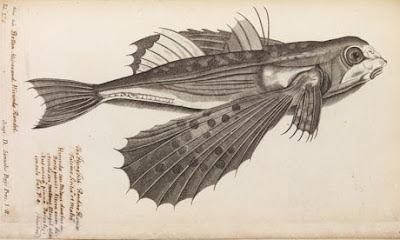 Now the reason I bring this to you in a Search Challenge is that there’s an interesting story behind this picture.

As I said, this book was published in the 17th century.  Typically, publishers like to make a little money after the publication of a book, or at very least they want to break even.  But in this case, the publisher almost lost everything putting this book out to print, which left them unable to fund the production of the next book.  It turned out that the nearly-unpublished book was probably one of the most influential books in the history of science.  Luckily, someone stepped in at the last minute and paid for the publication of book 2.

To get to the story in tomorrow’s answer, you need to find out the following pieces of the puzzle:

1.  What’s the name of this book about fishes?

2.  What publisher was nearly bankrupted by its publication?

3.  The original author also wrote an early definitive study of games.
What, according to the author, was sometimes inserted into a football
to make it a little more mobile, and keep it from just lying there?

And for extra credit…

4. Since the publisher was nearly bankrupt, who actually put up the
money to pay for the publication of the NEXT book by this publisher?

I know this all sounds improbable, but it’s a really fascinating set of interlocking stories.  Try the search, and as usual, let us know the answers and how long it took for you to find them!