Answer: Questions about bats--How many? Why do they hang upside down?

... creatures of the night, and you have to admit they have a real PR problem--vampires, high-pitched squeaky noises, their long association with dead things.

But they are fascinating, and these questions drove a lot of comments this week. Thanks for all the things you found and for sharing with the SRS community.  (Who knew?  South American bats that hibernate in snow banks? Amazing.)

This week's Challenge is another in our end of year series of Challenges that are not-too-hard-but-fun.

I've been curious about bats for a while and have always wondered a couple of things.  Can we find the answers to these curious questions?

Here's what we asked and what we learned...

1. Why do bats hang upside down when they sleep?  (It seems like a terrible idea to hang by your feet, so what drove them to adopt this unique sleeping posture?)

One of the biggest changes to Google in the past few years has been the ability to handle questions in a natural language form.  As longtime SRS readers will recall, once upon a time, you had to really think long and hard about what the exact search terms should be in order to elicit just the right response.  Now, more often than not, you can just ask the question.

Knowing this, my first query was:

[ why does a bat hang upside down ]

That gives me some pretty decent results including a post at La Trobe University (Australia), and another at Mental Floss (a rewrite of a Quora post) telling us that it's simpler for a bat to start flying if it drops down from its heads-down roost and gets a bit of velocity just by letting go.  This post also points to a longer, evolutionary story about why bats got to be that way.  If you want the original reference, see: Fossil Evidence and the Origin of Bats  in the Journal of Mammalian Evolution, Vol. 12, Nos. 1/2, June 2005. This paper points out that bats were originally gliding mammals (much like flying squirrels) that would hang from the underside of branches.  You can see how that might easily turn into an overnight sleeping posture.  And once you're sleeping upside down, the falling into the air trick is easy to evolve.

The original post also mentions some bats that sleep head-up, usually in leaves, where they have evolved octopus-like suckers on their feet to hold onto the leaves.  And these bats typically sleep in a heads-up pose.  So how do they get launched?  They slide out of their leafy tube-houses and then fall to earth.

So, why do they sleep like that? Because it's simpler to become airborne!

[ how many different kinds of bat species are there ]

which gives a reasonably authoritative answer and a few good links.

The large answer (1,400 species) comes from the DOI.gov (US Department of the Interior) site, which is pretty authoritative.  But... On the other hand, the text on that page is fairly informal  and click-baity enough to give you pause, ("13 Awesome Facts About Bats..They’ve been called creepy, scary and spooky, but bats are an important species"). You're right to be a little skeptical about it.  Note that all of the information on this page actually seems very accurate, but it's so informal that you'd want to double check it.  What happens when you do that?

I opened up a bunch of other link in the top 10 results from my previous search, and found that they're all fairly similar.  I kept reading that the estimate of species is always "more than 1,400" or "around 1,200."  But I'd like to find a source with obvious credibility on the worldwide bat situation.  (I mean, I believe the Department of Interior, but they might not count all of the bat species worldwide.)

So I re-did my query using more precise language:

in the hopes of finding more scholastic and accurate results.  Take a look at these results and check out where they're from: 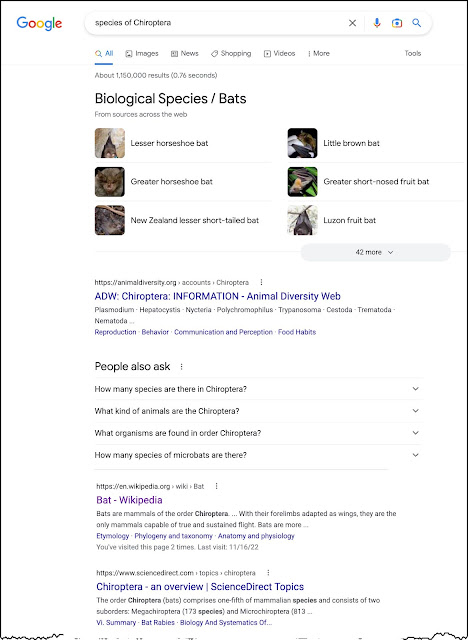 The first result is from the AnimalDiversityWeb (which claims there are 925 bat species), the next is the Wikipedia article on bats claims over 1,400 bat species, but without any citation, while the Wikipedia article "List of bats" claims "estimated 1,300 species."  Other hits include ScienceDirect (claims 986 bat species), BBC Science Focus ("more than 1,200), and the University of California Paleontology (UCMP) (claims "nearly 1,000 species").  That's a pretty big range of answers (from 925 - 1400)!  How do we get some consensus?

Maybe we need some higher quality resources.  Looking in Google Scholar for

I find a few hits:

And so on. When I did a search for:

I found a book chapter which seems pretty definitive. Order Chiroptera, by Nancy Simmons, is in the book Mammal species of the world: a taxonomic and geographic reference 1 (2005): 312-529.  This text, which many refer to as the master list of mammals, has a long list of bats (1,242 to be precise). It is the standard reference work in mammalogy giving descriptions and bibliographic data for the known species of mammals

There's a small problem: It's from 2005.  And, as we know, species numbers change over time.  Some of these are new species discovered in the last decade, but many were previously considered to be subspecies of other taxa. Species merge and split as we change what we consider a species.  This isn't a sign of a problem, but rather an indication that we're learning more and more as time passes.

So I'm willing to settle for "more than 1,200" species, but I need a bit more data to go with the unfounded assertion that there are 1,400 species, as Google proudly proclaims (having extracted that number from the Dept. of Interior's bat page, which points to the Bat Week web page, which doesn't say where they got that number).  Since that's unattributed, I feel better going with "more than 1,200" since I have a list of 1,242 bats by name!

3. We know many bats eat bugs, and some bats drink blood (vampire bats), and some eat fruit (fruit bats)... but what eats bats?  Do they have any natural predators?  (Let's exclude humans for the purposes of this discussion. As we know, humans will eat just about anything.)

For this I went with another question:

which takes us back to the Dept. of Interior page.  That page in turn says "Bats have few natural predators — disease is one of the biggest threats. Owls, hawks and snakes eat bats, but that’s nothing compared to the millions of bats dying from white-nose syndrome."  That sadly true, but our Challenge is about direct predation--what other animals eat bats?

Digging a little deeper into the SERP for this question and we'll that find minks, weasels and raccoons also eat bats.  As with the previous Challenge, the question query format is good for a kind of surface level understanding of the question, but not the details.

How to dig deeper?  Answer: By using a bit more precise language.  What's a synonym for "something that eats another organism"?  How about predation or predator?

Rephrase my query as:

which quickly led me to an article titled Do predators influence the behaviour of bats?  Lima, Steven L., and Joy M. O'Keefe.  Biological Reviews 88.3 (2013): 626-644. (Unfortunately behind a paywall, but I was able to see it with my university login.)

In this article I learned that bats are eaten by all the creatures we saw above, but ALSO eaten by bat hawks (Macheiramphus alcinus) of the Old World tropics, and bat falcons (Falco rufigularis) of the New World tropics.  Alligators also sometimes snatch bats from the air, and I also learned that "trawling bats" (that is, bats that fly very close to the water in search of stranded insects) are often captured by large fish and frogs!

This made me wonder what other kinds of "X eats Y" kinds of bat-eating behaviors we could find.  So my next query was:
[ "* eats bat" ]
where the asterisk (*) can stand in for one or a few words that precede eats bat.
After I ran this query I learn that bats are also captured an consumed by spiders (Texas banana spider captures a bat in its web and eats it), centipedes (David Attenborough shows a Peruvian giant yellow-leg cave-dwelling centipede capturing and devouring a bat).  And of course, cats and dogs (and humans!) capture and eat bats, although they're not major predators.
Once you know that other animals capture bats, you can do a more direct search for them (e.g., [ spider eats bat ]) and get even more articles to expand your range of bat-dining predators, including one article from LiveScience telling us that bat-eating spiders are everywhere!
So bat predators include hawks, falcons, owls, alligators, weasels, mink, snakes, fish, spiders, and centipedes!  Who knew?

So many things to point out this week.

1. Even simple questions might need careful clarification.  You'd think "how many species of bats are there" would be pretty straightforward.  But as we found out, the number varies by when you check your sources. Believe it or not, biologists are still finding new bat species and re-organizing the old ones.  Species split ("oh look!  we DNA-sequenced these bats and find that they're NOT the same!"), species merge ("oh look!  these two bats that look different are really the same!").  My general advice:  Look for a master list of species and count THAT.  Biologists love to make taxonomic lists of things, and that's probably the best resource for such a question.  Just realize the answer might change over time.

2. If you have a specific term (Chiroptera), use it.  Your searches will be much more focused than simply using a word like "bat." One doesn't use specific language to sound academic or smart, but simply because it's more precise, meaning you won't have to look around through low-quality results.

3. Remember the fill-in-the-blank ( * ) operator.  It's a great way to expand your searches and find additional items you seek.