Answer: A missing building in the park?

This mysterious space in the park...

... is mysterious no more thanks to the remarkable SRS Regulars!

To remind you of the Challenge for this week...  I was walking through a park in Berkeley (California) and happened upon an area at 37.885832, -122.261408 that was fairly blank.  That's a puzzle, because so much of the surrounding area was clearly built-up.  Since it was on an otherwise hilly area, it looked very much as if a building had been there at one time--but what?  There were a few pieces of flat concrete that looked suspiciously like former building foundations, and even more mysteriously, there's a flagpole on the western edge of the flat spot.

In this case, the SRS Regulars came up with the answer... and more!

So this week, I'm just going to merge their comments together and add a little twist of my own at the end.

Many readers figured this out rapidly.  Remmij was first to post the answer--the blank spot is in the middle of Codornices Park, the site of a former clubhouse that was designed (and partly built) by the famous Californian architect, Bernard Maybeck.  Although Remmij didn't give the path to the answer, I suspect it was very much like what Arthur Weiss wrote:

"[eventually by looking at the map I found multiple hits]... However things didn't quite fit - I couldn't add everything up. Eventually I found that the park was called Codornices Park (or Creek) and that there was a clubhouse there that had now gone. But the Wikipedia article {about Codornices creek} on this didn't mention the fire. I then tried [ "Codornices Park" History]  Plus I looked at the map and the panorama images - that included the flag pole.

Eventually I found gold. I wanted to see if there was anything on the club house so searched for [ "Codornices Park" "club house" ] and this gave images.

So I looked at the images and found { this picture of the clubhouse } with both a history and pictures of the club house and what happened to it - it continued to exist to the 1970s (so nothing to do with the fire). The quirkyberkeley.com site describes the building including the flagpole - which was built in 1916 by the Codornices Club."

Naomi chimed in with her search path:

I went directly to the map to confirm the location, did a search for Codornices Park history, and after a few dead ends refined it to the slide history and came up with the link that gives the answer: http://quirkyberkeley.com/the-codornices-club-clubhouse/

That's a good strategy, and it's what I did--look at the map first, then look around for nearby place names to focus your search.  In this case, the blank spot is clearly in Codornices Park, so I used that in all of my searches, and the concrete slide is really an unusual thing, so searching for that is sure to give good results as well.

2. The architect that that building is also the architect of a few other pieces nearby.  Can you figure one that's closest to this spot?

Finding the name Bernard Maybeck, I did a search for

First on the Search Engine Results Page (SERP) was a list with addresses of his buildings from Noehill:Architects Bernard Maybeck (1862-1957)

Can I use Google Sheets to calculate the distance from Codornices Park?

And learn that this is the Google Maps Formulas for Google Sheets.

Using a copy of his sheet, I copied the data from Noehill. Then cleaned up the data to create this sheet.

From that I see that there are two that are within a quarter mile of the park.  The Rose Walk and the Senger House at 1321 Bay View Place.

In a brilliant move, Arthur then took Krossbow's dataset and made a Google Map of all the Maybeck buildings in California.  (Here's that map with a few additions by me.) 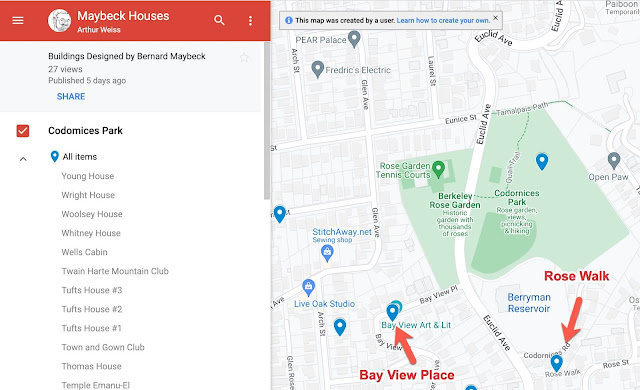 The blue pin in the middle of the green area marking off Codornices park is the location of the clubhouse.  In Arthur's sheet, you'll see that the distance is the same to both (0.2 miles).  Interestingly, I knew about the Rose Walk (which is really a stairway designed by Maybeck), but not about the Bay View Place house.

1. Take a quick look around for relevant information.  In my case, I immediately went to Google Maps to find that the location was in Codornices Park, using that as a search term, it was fairly simple to find the clubhouse information.  Noticing that there's a concrete slide there as well gives you additional high quality search terms.

2. Look one level deeper.  Once I found that Bernard Maybeck was the designer, it was straightforward to do an image search and find that photo of him actually sawing a board while working on the clubhouse in 1916.  Fascinating stuff!

3.  Use Sheets to compute distances automatically.  Follow Krossbow's lead--Google Sheets can compute remarkable things, IF you know that it's possible.  Check out the formulas in each of the cells.  Nice job!

4. MyMaps lets you visualize the spatial relationships.  With input from Krossbow's sheet, Arthur created a map of ALL the Maybeck buildings in California, which implicitly gives the answer to our Challenge.

5. Get your spelling right!!  When I first started this challenge, I wasted about 2 hours looking for Cordonices Park (note the extra R in the name--and I note that Naomi had the same spelling problem as I did.. the string "codor" isn't a common one in English, but "cord" is VERY common.  The thing is, I found several articles with "Cordonices," so I thought everything was fine. Only after a while did I spot my error.

Of course, it doesn't help that one of the original maps of the place ALSO has a spelling error in it:

For what it's worth, this is a pretty poor map--trust me, Codornices creek looks nothing like this.

6. Remember to check other resources.  A quick search in YouTube showed me this video of the park.  At 1:10 you can see the boy walk into the open space of the former clubhouse.  (And at 1:29 you can see how the concrete slide works. 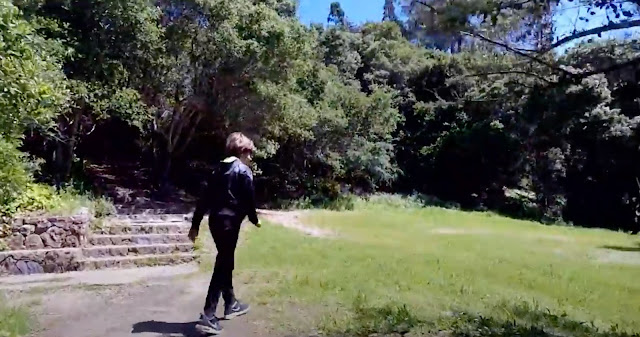 7. For historical content like this, be sure to check online newspapers.  I used my account at Newspapers.com to look for [ "Codornices clubhouse" ] and found a large number of hits.  Here are a few of the more interesting hits...

- 1964 - “clubhouse distinguished by its large stone fireplace and designed by the world-renowned architect Bernard Maybeck, who once was a member of Codornices”  … “condemned as an earthquake hazard and will be torn down…”Oakland Tribune, March 24, 1964, page 26,

Interestingly, I haven't been able to find any news coverage of the clubhouse opening or its demolition--both the beginning and the ending seem to have been left out of the story.