Answer: Where is that trail?


Here's what I did to find it.


I kept thinking it was a "trail" so I kept searching for a trail map that had "Wallace Stegner trail" on it.


That turned out to be a bit of a dead end.  It's partly because Los Altos Hills calls their system of trails "pathways" rather than trails.  I picked up that useful factoid by reading about Los Altos Hills trails and stumbling across an article that mentioned their "system of pathways."


Once I did a search for [ "Wallace Stegner pathway"] and it returned only 5 hits (and one of which is broken with a 404 error).  Luckily, the link to SF Gate article about Wallace Stegner's house being demolished was good enough.


The key piece of data to take away from this is this sentence:


"It [the trail] starts on Three Forks Lane where the narrow path alongside Matadero Creek near the Stegner property. "

Elsewhere in that article it gives the Stegner home address at 13456 South Fork Lane, Los Altos Hills, CA.  (Note: Wallace passed away a few years ago and the residence has changed hands.)


If you look at the Google map for that street address, you can see that the obvious nearby watershed is named "Matadero Creek."  And if you use Google Streetview to "walk"  down the street to the place where the creek crosses the road, you'll quickly find that location, here. 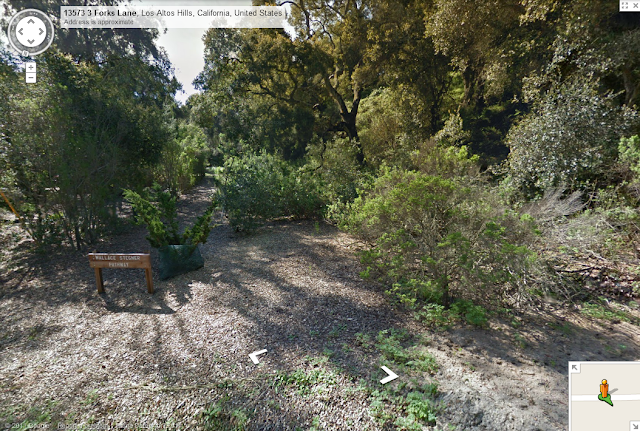 Click on the image to see the full resolution.


Now, to tell the truth, even though I was THERE, because of the complications of the hills where I'd been running, I really didn't know where the official start of the trail was.  So this result surprised me.


Since I know that the trail is part of the official city "pathway system," I just did [site:losaltoshills.ca.gov wallace stegner pathway ] to limit my search to the official city publications and that gave me the city newletter, "Our Town" from 2009.  In that newletter it says:


"...Wallace Stegner Path from Three Forks Lane to Edgerton Road, named for the world famous author who lived for many years just uphill from that path."

It wasn't hard to use StreetView to find the other end on Edgerton Rd. 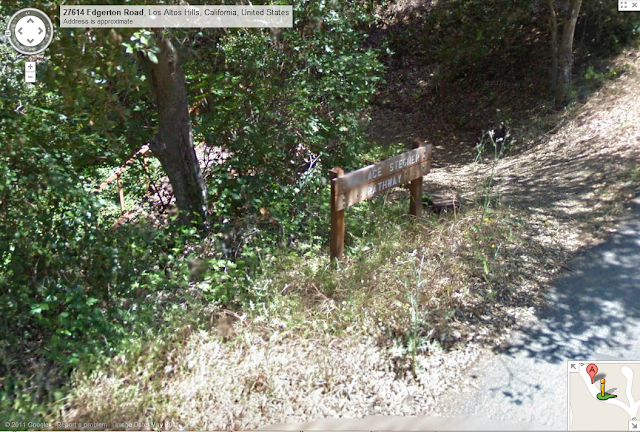 Click on the image to see the full resolution.
Note that the first part of the sign was blurred-out by the algorithm
that blurs out license plate numbers.  For some reason, it thinks part of
this sign is a license plate.


To be sure, I tried following the trail on the Maps view, and I even tried Google Earth, hoping to get better resolution.  But the trail is obscured by heavy trees, and I couldn't follow it reliably.  Luckily, the city put up those handy markers to let me find it!


Now... I have to point out that many readers found the Wallace Stegner Memorial Bench located up in the Long Ridge Open Space Preserve at lat/long: 37.278778, -122.160767   It turns out that I've gone running up there too, and it's NOT on the Wallace Stegner trail (or pathway), and it's definitely NOT in Los Altos Hills (as I said in the original challenge).  It's actually on Long Ridge Road (a fire road / trail).


It's a beautiful place too... and for some very nice photos of the Stegner Bench, see SmugMug photos.


But I congratulate you on finding a truly wonderful place to go for a hike that perfectly captures the sense of Stegner's writing.  If you're in the area, I highly recommend a visit--both to the bench and to the trail.


Search lesson:  (1)  Check your work.  (It wasn't in Los Altos Hills!)  And (2) when you're reading through related texts, be sure to stay alert to the possibility that what you're searching for might be called something else.  That is, your terminology might not quite be the right one.  Stay open to other ways of saying things.