It was a 50 yard fog.  Beyond that distance, it was all just white, a slowly swirling, pearly infinity… the kind of fog that hides everything outside of a certain distance.

As I walked through Mitchell Park early that morning with my coffee in hand, I was struck by how different everything seemed.  It was quieter than usual—you’d expect that in the fog---but was I was noticing was how the structure of the park, the very shape of the open fields, the arrangement of trees, the layout of space seemed somehow… different… Mysterious, sure, but in particular, the masses of trees seemed somehow more apparent, less ordinary, more.. I don’t know…present.

As I crossed the small bridge over Adobe Creek I saw redwoods looming up out of the translucency.  There was one, maybe 100 feet high.  I walked another 30 yards and could see more redwoods emerging as I moved forward.

“Redwoods” and “fog” go together about like “orange” and “juice,” they co-occur all the time.  Redwoods love the fog and rely on it for moisture in their natural habitat in the mountains. But this time it was in the park near home.  And for the first time I noticed something that had somehow escaped my attention on all my previous visits to the park.  The redwoods were planted in a straight line at regular 10 yard intervals—a picket-line of tall trees.  I stopped and stared—how was it possible that I’d never, ever seen this regular progression before?  It’s not just trees in a line along the edge of the street, these were hundred-foot giants that were marching like Ents into battle through the fog of war.  Seeing this progression of trees in my local park made me feel as though I’d somehow missed a major feature of the landscape.  This wasn’t just beautiful backdrop, this was a linear forest that I’d somehow never noticed.

Was it the fog changing my perception and letting me see the gestalt by eliminating visual noise from the scene?  One of the fundamental principles of gestalt perception is the law of prägnanz (German for pithiness), that is, we tend to organize our experience in a manner that is regular, orderly, symmetric, and simple.  In this way, things that clump together seem to be a “unit” (such as a row of trees), while items farther apart are seen as individuals.  I’ll let you work out what the conditions for “togetherness” and unit perception are.

Could it be that I was seeing some kind of hybrid image?  You’ve probably seen these before—when you’re close to the picture your eye picks up all the high frequencies, but as you back away your eye can’t see the tiny, high frequency twiddly bits any more, just the larger strokes of the low frequencies.  That’s how the same picture can look like Einstein up close, but Marilyn Monroe from far away.  Is that what the fog was doing?  Somehow attenuating the high frequencies?

I suppose that what was happening to me is true more generally.  Different circumstances cause substantially different outlooks on the world.

I was thinking about literally seeing another person’s point-of-view the other day as I reviewed a paper about an “embodied avatar,” that is, the paper described an animated picture of a person (the “avatar”) that could be projected onto walls and manipulated by a real person.  The article was all about how confusing it was to the person who was remotely operating the avatar—how they’d mix up left for right, or swap “near” to them vs. “near” to the avatar.  That all made sense, it’s just the normal confusion people have when trying to run something that’s far away from them, when what-they-see is NOT what the remotely controlled device sees, particularly when there’s a coordinate transformation involved.

I’d had some practice doing this with remotely controlled gliders.  I’ve built more than a few from scratch and had the distinctly painful experience of unintentionally swapping left for right or up for down and driving my laboriously built glider into the ground at a high rate of speed.  As they say in the business, I practiced “controlled descent into terrain” because I momentarily couldn’t figure out if up was down, or left was right… from the perspective of the glider.

I know this kind of thing is common when you’re doing remote control.  I’ve spent many happy hours projecting myself into the seat of my remotely controlled glider, slowly learning the skill of “seeing the world from the point of view of the glider” rather than seeing things from where I was actually standing.

And as a careful reviewer I wanted to write a review that would help out the authors.  Point them to literature that they clearly didn’t know about.

I tried things like [remote control glider disorientation] and [driving at a distance] and even [drone flying practice] (hoping to tap into some Air Force research about remote operation of drones in the military.

But nothing was working.  Was I completely off base here?  Did that literature NOT exist somehow?   I began to question my own memory of reading this stuff.

And then I spotted the key term buried deep as I was scanning an article on the remote operation of deep sea rover arms.  The word was “teleoperation.”

Aha!  It wasn’t “remote” *anything* -- the term of art is teleoperation—when I read that, I had thoughts of scientists from the 1960s picking up flasks of radioactive substances, and images from my late 1960s schoolboy books of science flashed through my mind.  But the prefix “tele-“ was the key that led me to the robotics literature and to the studies of disorientation because of eye location vs. remotely-operated system displacement.

This kind of “noticed insight” happens often enough that it’s got to be more than just an oddity.  I find it really interesting that such a tiny, barely observable artifact can drive your search to a successful completion.   And it seems it’s just true more generally:  Small changes in your perception can transform everything you see in an environment.  That’s when I thought about what I’d seen in the park.

The day after I walked through the fog I went for a run on a trail in the canyons not far from home in the Hidden Villa preserve.  It’s a mixed variety forest—some fir trees, mostly oaks of different kinds, a few big tooth maples, some California buckeyes.  Along the trail grows mostly ferns, some hazels, coffeeberry bush, sycamores—the typical understory of the Santa Cruz mountains along streams and rivers. (It’s called the “Central Californian riparian” ecosystem.)   In the summertime the plants are pretty much a uniform green—you can see the leaf shapes, subtle variations in green, but not much else.  It’s pretty much all a wash of plantlife.

But now, in late autumn, the maples have been transformed to brilliant yellow and stand out like chrome yellow beacons in the background of oaky green.  That’s the kind of thing you expect.  What I didn’t expect were the changes to other plants visible on Hidden Villa trail.  Like the maples, different kinds of shrubs had changed colors, making them visible as newly apparent groups as well.  The willows had changed, the poison oak, the sycamores… between all the color changes and leaves falling, very different kinds of plant structures were visible.

Now, another gestalt principle is the Law of Common Fate—birds that fly together in a flock share very similar trajectories over time and can be seen as a group.  In the same way, as you run up the canyon, bushes that share a color, or are now visible because of leaves no longer in the way can be seen as sharing a common motion against the backdrop of the evergreens.  And that’s when I understood what I’d seen in the fog. 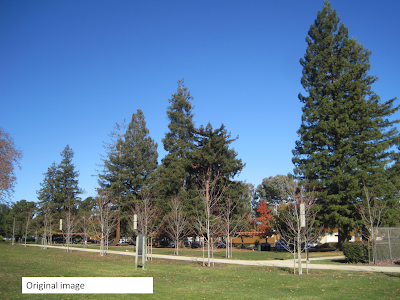 I’d initially thought that fog was just adding a white-gauze-like filter over the scene, and that THIS was what had changed my vision of the redwoods.  So, being an experimental kind of guy, I went back to the park, stood at the same place where I’d suddenly seen the redwoods in a cluster and took a picture with my digital camera. 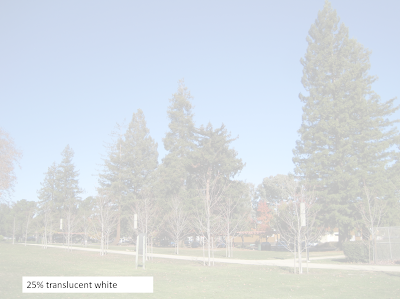 Then, back at home, I played around for a bit by adding translucent layers (representing the fog) at different opacity levels.  Here’s the strange result: no matter what I did, I couldn’t get the redwoods to “pop” out of the background the way I’d seen it on that foggy morning.  What did I not understand?

My run up the canyon with the changed foreground against the evergreen background gave me the insight I needed.  To get that “pop” gestalt effect, I needed to see the redwoods as sharing a Common Fate; that is, that they’d appear to move together as a unit.  But just adding in a translucent layer of white wasn’t cutting it.

What I realized now during my run was that seeing a different background altered what I could see in the foreground.  Not only was the fog putting a white glaze over everything, but the fog was ALSO cutting off all of the background behind the redwoods.  It was a screening effect, changing what groups I could perceive by eliminating the background. 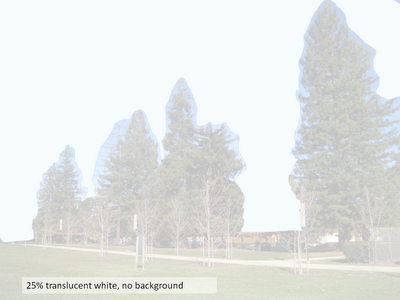 When I photoshopped out the background—as though it were being done by a 50-yard fog—it became clear what was going on.  The redwoods stood out as repeated units marching down the edge of the park.

As I looked at the altered picture, I also realized that there were a line of sycamores in front of the redwoods.  (They're the small, bare trees between the camera and the redwoods in the picutres.)  But they’d all lost their leaves as well.  If I’d walked this way on a foggy day in June, I’d have never seen the redwood gestalt—it would have been hidden behind the canopy of the sycamores.  It was literally a case of not being able to see the trees for the forest.


And although it's a little hard to see in a static image like this, when I was walking through the fog, it was clear that the redwoods were supposed to be planted in pairs (at either end of two horseshoe pits--for 4 pairs of redwoods).  But as this diagram shows, two of the trees were missing. 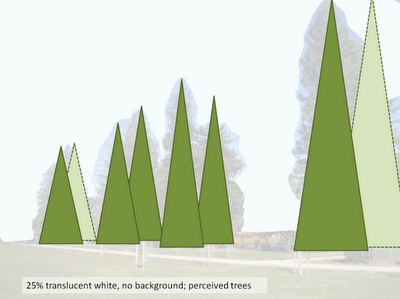 The effect was driven by the parallax shift on the two existing pairs of trees (solid lines, dark green) and was so striking that I walked over to the horseshoe pits and found, sure enough, that two of the eight trees were missing-in-action, having fallen prey to time and disease, leaving just stumps on the ground.

But like running across “tele-“ in my search, my little observation ( understanding the effect of fog as creating a moving backdrop obscuring what’s behind) led to a whole new way of looking at the urban forest, and an appreciation for new ways of seeing the world.

Bottom line for search:  There are two big lessons here.

(1) A good searcher often learns from what's on the page, even when it seems off-topic.  You can often pick up terms of art that WILL help you focus on what you want to find.   In the case of the redwoods,

(2) Sometimes removing the background clutter can improve your vision.  In this case, the fog was giving me a background removal function for the visual image.  In looking at search results, you'll sometimes have to figure out what to ignore to let the big picture stand out clearly.