Regular readers of SearchResearch know that we are sober, quiet, and interested in the deeper uses of online research.  One typically doesn't find much that's salacious here.


But for today's Search Challenge we'll make an exception.  This search is about gossip and somewhat tawdry rumors that we want to run down.  The reason this is interesting to readers today is that it involves Mark Twain and a bit of 19th century scandal mongering.


As you probably know, Mark Twain suffered from a bit of a financial setback in the middle of his life.  This led to his regular touring shows where he would lecture and generally wax wise about the state of the world.
Today's search challenge is this:


Background:  Mark Twain lost much of his money by investing heavily in the development of a very complex device.  The developer was a bit of a scoundrel who not only lost Twain's investment, but was caught up in a series of accusations and counter-accusations with a noted woman. 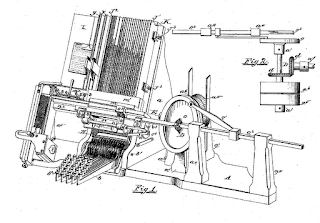 Image from USPTO of the invention that led to financial setbacks for Twain.