Answer: Who was she, and how much did she get?

The short answers:  Mark Twain invested overmuch in the charismatic developer / inventor James W. Paige’s typesetting invention and lost all of his investment.    Paige, a fascinating scoundrel if there ever was one, became engaged (maybe) to Jessie Hall, who later sued him for $950,000, which is a lot now and an incredible sum back in 1892.  But the story is so complex that the lawyers eventually signed a statement that discharged the suit with no money changing hands.

I started with by first finding what Mark Twain’s “financial difficulty” was all about.  The query [Twain financial problems] led to the Wikipedia page about Twain.  Then a bit of reading and it was clear that it was the Paige typesetter.  (Aka the Paige Compositor) 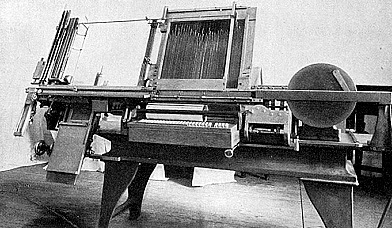 The Paige typesetter (from www.TwainQuotes.com)

That led me to learn about the Paige typesetter.  As noted on Twain's Wikipedia page, "His technological fascination with the Paige typesetter has often been cited as the ill-fated investment that bankrupted him."  Okay, this is the probably the issue we want to focus on.

So, I searched on  [Paige Typesetter invention]  and that leads straight to the Twain Quotes Page, a page rich with content, really interesting pull quotes from a number of contemporary resources about Paige, covering all of his foibles and various pecadillos.

Now... one of the operating principles you have to take on as you do internet research is to check everything.  So I started checking things.

This page has a bunch of newspaper citations, so this gave me the chance to follow-up and verify that the references were up-to-date and correct.  Sure enough, all the citations checked out.  (Example:  here’s the LA Times archive for one of the citations) Note that you can buy the original article for $2.95.  Similarly, you can check out an article about the law suit (Jessie Hall, an Actress, Claims Big Damages for Blighted Affections)  in the Hartford Courant (June 10, 1892) at   -- oddly here, it’s $3.95 (seems expensive for 244 words…)

The big search point is that newspaper archives are often a great way to follow up these kinds of trails.  BUT they often need to be searched newspaper-by-newspaper, which often brings up the problem about finding archives of newspapers that might be out-of-print.  You usually need to search for the newspaper, THEN find an online database that has that newspaper.. for the dates that you’re interested in.

In this case I started with the LATimes.com because I knew that they had searchable archives (through Proquest).  I did that search, found the article, and then used that to spot check the other articles (e.g., the Hartford Courant).  Of course, the NYTimes has a free archive, and a quick search on their archive [ "Jessie Hall" James W. Paige ] (in 1892) leads to a nice article in the New York Times.  Notice that I used double-quote around "Jessie Hall" to avoid the spell-corrector trying to convert "Jessie" into "Jesse."

This is a great search strategy to know:  Use newpaper archives, but know how to find the archives in the first place!

Wanting to check out everything, I also went to Google Patent search and, armed with the full name “James W. Paige” and knowing he invented a kind of typesetter, I was able to find his original patent, US 547859, "Machine for setting, distributing and justifying type."

Now we're in the place to answer the questions..  But first, the story in short:

James Paige took a good deal of Twain’s money and then more-or-less wasted it, losing his investment.

Somewhat later, Paige took an interest in actress Jessie Hall (stage name: Dorothea Lewis) and convinced her to move in with him in Hartford, CT.  Apparently all was not well in Hartford as she later had him charged with assault and battery of her (and her mother).  Then, the way these things go, one week later, Paige and Hall left Hartford for Chicago.  (!)  More disagreements followed and Hall returned to Hartford and filed suit for $800,000 for promising to marry, but then backing out of the deal.

Just to add a twist, when the case came to trial, it turned out that Jessie Hall had JUST been to that same court for illegally living with another man, Edwin M. Grant.

It’s a complicated set of lives, and Paige seems to have been quite a guy.  As Twain later wrote about Paige in his autobiography:

“Paige and I always meet on effusively affectionate terms; and yet he knows perfectly well that if I had his nuts in a steel trap I would shut out all human succor and watch that trap till he died.”

So… our last question was “And how much was she paid?”

In the end, the lawsuit against James W. Paige (Case #S-140309) was filed in the Superior Court of Cook County, Illinois. On February 17, 1893, both the attorneys for Paige and Hall signed a document dismissing the case without cost.

I’ve thought about getting a copy of that document.  If you’re interested in this, here’s the Archives records search form for the Cook County Court system.  http://198.173.15.34/?section=RecArchivePage&RecArchivePage=6015

1. Newspaper archives are a wonderful resource for tracking down complex stories, but they're scattered all over, and over are not indexed by Google, so you need to actually use their web sites to search their archives.

2. Newspapers often charge for access.  Luckily, if you shop around, you can often find less expensive versions of the content.

Now, was that hard?

Lots of people got this challenge correct, which is great.  Interestingly, it seems to have taken somewhere between 2.5 minutes and 20 minutes!

I know that most people consider 10 minutes to be a fairly long task (most search tasks take less time).  But did you find this difficult?  Is search task difficulty the result of just the amount of time you take, or of the number of searches and clicks you have to do to get to the answer?  What's your opinion?