The recent Tōhoku earthquake and resulting tsunami on Friday March 11, 2011 was devastating with massive loss of life and property, putting thousands of people out of their homes in an instant.


This made me think back to the last giant disastrous earthquake that happened in San Francisco--the 1906 earthquake that destroyed the city through a combination of ground shaking and subsequent ill-planned attempts to stop the fires that were started.  Much of the city was leveled, then much of it burned, leaving at least 250,000 people homeless.


As you know, San Francisco can be a lovely place, but it can also be cold, windy and foggy.  While it never really snows, it can be a very unpleasant place to be camping without supplies while the city is being restored.


It's pretty easy to lookup the weather in the Tōhoku region for the period immediately after the earthquake.  But today's question is a bit more difficult than that:


What was the weather like in San Francisco on the day of the 1906 earthquake AND for the next 7 days afterwards? 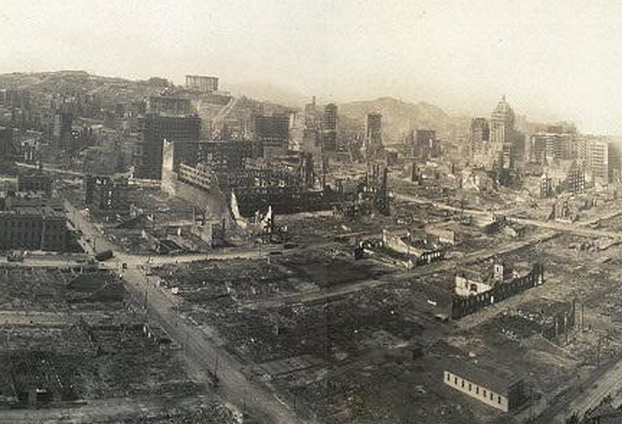 Two views of downtown San Francisco after the earthquake and fires of 1906.
What was the weather like if you were homeless after this earthquake?
(Both photos by George Lawrence, taken by kite photography, 1906.)


This gets to be slightly tricky as all of the communications infrastructure also went down with the earthquake.  So, how will you find out what the weather was?  Was it cold and foggy?  Was it raining?  How miserable was it for the survivors?


Caution: When I was searching for the answer to this, I kept getting pulled into remarkable and amazing stories about the earthquake.  You might too.  This search took me hours longer than this should have because it was a fascinating topic.  Careful that you don't spend too many hours researching this amazing time in California history.

Be sure to include a quick description of HOW you found the answer, WHAT resources you used, and HOW LONG did it take you to find the answer.